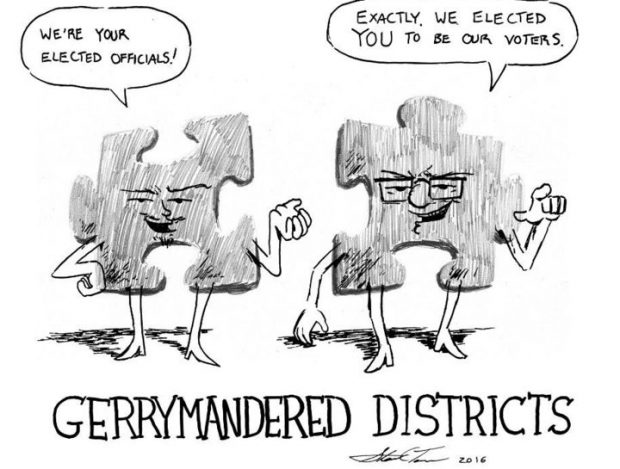 A Federal Court in North Carolina issued a 205 page opinion striking down the recent changes in electoral districts for congress in that state. Did that truly give Ol’Gerrymander a boot? Likely the issue is now headed for the USSCT. Read it and tell me what you think:

Honestly, I have never understood the constitutional case against gerrymandering. I don’t like it, but it seems the only constitutional question is if the numbers are equitable.

“The law, in its majestic equality, forbids the rich as well as the poor to sleep under bridges, to beg in the streets, and to steal bread.” Anatole France.
Equitable like this, Christopher?

It rather clearly runs afoul of the notions of freedom of association and equal protection of the law, the problem has always been a judicially enforceable standard. Prior to the 1960s the court allowed districts to be unequal population too, which led to tremendous inequalities in representation. What is the fundamental difference between cutting, say, Austin, TX into six different districts so that none of its Congressmen represent its interests, verses giving it a very large district? Both of it ensure it has less representation, but you only think one is unconstitutional?

Unequal populations clearly violate equal protection, but I don’t see a constitutional case for basically saying we can’t elect the people we want.

My concern is that this decision’s logic only really works because the NC Republicans openly and brazenly proclaimed that they were creating a partisan Gerrymander, which itself was an intentional defense against charges of racial Gerrymandering. Future legislatures will not be so foolish.

That’s the big issue with the Supreme Court weighing in. It may be that they finally just mandate independent redistricting commissions for all 50 states. Or That seems to be the equitable solution. Otherwise if you narrow the scope to race, they will find a way around it. If you narrow the scope to politics, people will find a way around it. I am glad the MD case is coming under scrutiny too. This is not a fundamentally partisan issue, even if Democrats have been primarily on the receiving end of the losses lately. Maryland and Illinois are prime suspects as well, as was California before it’s voters adopted independent redistricting. MMP (https://en.wikipedia.org/wiki/Mixed-member_proportional_representation) would be an even better result, but surely a pipe dream.

A Federal Court in North Carolina issued a 205 page opinion striking down the recent changes in electoral districts for congress in that state. Did that truly give Ol’Gerrymander a boot? Likely the issue is now headed for the USSCT

The Supreme Court already heard Gill v Whitford this term and will hear this one also.

The question has never been whether or no to give gerrymandering the boot, but how to come up with legally clean tests to determine A) if it is occurring for solely partisan reasons and 2) methods of drawing maps that are both equitable and constitutionally permissible: in previous cases the Supremes as much as said ‘if you can prove it, we’ll strike it down.’

Don’t forget iii): whether partisan gerrymandering that is not racially motivated is permissible under the Constitution. (I know what I’d say, but that is not the point.)

So many permutations, which is exactly why constitutionally none of it should matter. Nobody is counted as 3/5 of a person anymore so everything else is a political question.

That was the argument in Plessy v Fergueson, that as long as there was some kind of lip service paid to “equality” that pretty much nothing else mattered an the courts should just stay out of it.
Or the arguments used to justify “literacy tests” for voting because, after all, the tests apply to everyone.
Or poll taxes, since they apply to everyone.
It’s true that it will take some judgment and study to decide between different interests and different arguments, but that’s the reason that we have courts. You seem to be arguing that your willful ignorance should be enough to decide constitutional questions.

Poll taxes keep people from voting (and are expressly unconstitutional per amendment). Literacy tests are irrelevant and WERE applied unequally. Plus have you seen these “literacy” tests? Some of them at least weren’t so much about literacy as they were brain teasers designed to be confusing.

Until someone went to court, all these things were just political questions.

The argument in Gill v. Whitford was pretty interesting to listen to. It sure seemed to me like there are 5 justices who think that the practice is grossly undemocratic and corrupt, but I don’t think there are 5 that think that there is a way for the judiciary to (i) identify the problem, even in marginal cases, and (ii) remedy it, in a way that is not also grossly undemocratic and corrupt.

The founders were correct in identifying the toxic effect of political parties, but, alas, quite naive in their belief that we would never be afflicted by them.

Plaintiffs originally had a pretty neat idea using statistics, counting something they called “voting efficiency” which measures how likely your vote is to be meaningful in an actual rather than purely symbolic sense. A vote is less meaningful in a gerrymandered district than in a competitive one. And because there are gerrymander-proof elections, like for state-wide office or Senate, you can account for the overall political tilt of the state. Unfortunately, I think that the justices are concerned that the subtleties of statistics will be lost on the majority of voters, which would compromise the political legitimacy of any judicial evaluation. I gather that the plaintiffs backed away from the statistics, but that leaves the overall problem of devising a workable judicial solution.

Alas, because an end to the pernicious practice would be immensely beneficial to the governance of our own state.