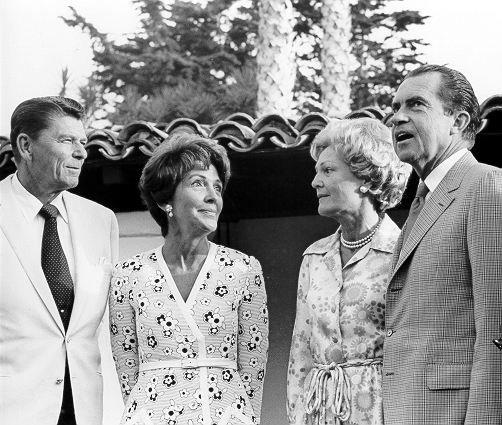 For any who challenge my observation that racism has been an integral part of the GOP belief system for generations, I offer this evidence. The transcript goes like this:

Two white racists, one the most powerful man in the world, sharing racist stereotypes.

There is nothing new about the energy that put Donald Trump in office and that is destroying what is left of our culture today. The GOP has been pandering to this darkness for at least fifty years.

There is no excusing this racism. This language was as explicitly racist in 1971 as it is today. Both men knew it, that racism was the point of this shared “joke”. In more than fifty years of GOP dominance of American government (GOP ideology dominated American government even as a minority), we’ve seen racist policies put in place by wealthy white racist men.

It is no coincidence that America elevated the most explicitly racist public figure in the modern era to the presidency after two terms of our first Black president.

America was not ready for a Black president.

Mr. Trump is still the president. His campaign won a majority of all three branches of government. His racism (and bigotry and misogyny) was on full display throughout his campaign.

I believe that historians will view the 2016 election as a backlash against the administration of Barack Obama. During that entire administration, the GOP opposition to Barack Obama — led by Mitch McConnell — was explicitly personal (and I think therefore racist) from the very beginning.

It is true that America re-elected Barack Obama in 2012. It is also true that the Mitt Romney was a centrist nominee chosen by the GOP in an effort to woo back a majority of “centrist” voters. That strategy failed, in no small part because urban minority voters turned out in droves to re-elect Mr. Obama and the racist, bigoted, and misogynist core of the GOP stayed home (because no candidate appealed to them).

The GOP pandered to the most deplorable elements of America in 2016 and won all three branches of government. White deplorables turned out in record numbers to support the GOP and its nominee. The same urban minority voters who turned out for Barack Obama stayed home for Hillary Clinton.

I stand by my assertion that America was not ready for a black President.

Without getting too far into the weeds, I think you are both right. America at its best elects Barack Obama. America at its worst replaces him with Donald Trump (rejecting a far more qualified women I might add).

I highly recommend this essay from Ta Nehisi Coates describing how Trump was arguably elected because of his whiteness and the explicit racial contrast he drew that prior Republicans drew implicitly (while reserving their personal racism for talk behind closed doors).

.... Aaaand if you live in the Town of Arlington, you can go to
https://arlingtoncca.com/
... and opt-up to more renewable energy for your home. (Go 100%!)
@arlingtonmagov @AdamWChap

And if you live in @TownofBrookline head to the website below to opt-up.

P.S. Yes, @caroldham & I were the petitioners to bring this program to #Brookline. And yes, to date, this program has had a larger impact on carbon reduction than any other in town.

Sure would be nice to get some help from our @MassGovernor in keeping methane in the ground.

“fingerprints point to a probable [methane] source: shale oil and gas"
“Methane from biological sources such as cows and wetlands have a low carbon-13 content – compared to methane from most fossil fuels.”

ed markey is one of the only people i'm willing to spend hours standing in the freezing cold rain for -- you can spy me in this video talking about why i'm #StickingWithEd! https://twitter.com/EdMarkey/status/1229915530519334913

What does our movement stand for? The working class. Medicare For All. The Green New Deal. Curing Alzheimer's. Delivering for Massachusetts. #WGBHDebate #MASen