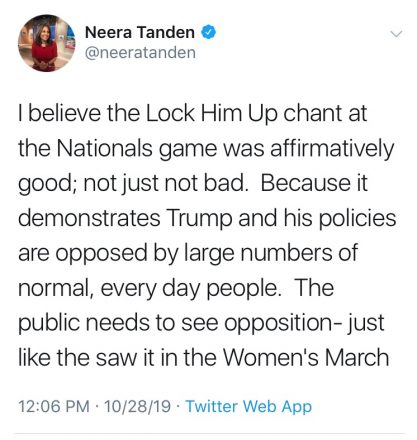 People around the world who are fighting for good, transparent, and democratic governance, rule of law, real elections, and an END to government by strongman and government by bribe, also need to see that average Americans are as disgusted by him as they are.

More importantly, they will see that when he finally appeared in public in front of an audience that was not hand-picked, average Americans booed him to his face. People in various countries who have been ridiculed for years for looking to America as an example need a boost right now. They got it last night.

I’m very familiar with those on the left who think that the US long ago forfeited its right to pretend to be a paragon of, or even an example of democracy worth believing in, because I am of that left.

I marched in Washington against US intervention in Central America. I marched against both Iraq wars.

But whether you know it, admit it, or want to accept it, there are isolated people, small groups, and beleaguered and persecuted political party activists all over this world who, despite Iran in 1953, Guatemala in 1954, Cambodia in 1969, Chile in 1973, despite all of that and more, look to the United States as a beacon of hope that democratic governance with separation of powers and limited powers is possible.

Many also look to places like Europe, Botswana, Costa Rica and other countries with good governance as well, but they also look our way.

I know them. I shook their hands in the former Soviet Union, in Eastern Europe, the Democratic Republic of the Congo, and in Colombia.

They are there. And I am here to tell you that the booing of our Banana Republican would-be despot that occurred last night, meant the world to them.

They are alone. They are powerless. They are beleaguered. But they are unbendable. And they are there.

RFK warned against our current crisis which he called the danger of futility : the belief that there is nothing one man or woman can do against the enormous array of the world’s ills…

“Each time a man stands up for an ideal, or acts to improve the lots of others, or strikes out against injustice, he sends forth a tiny ripple of hope, and crossing each other from a million different centers of energy and daring those ripples build a current which can sweep down the mightiest walls of oppression and resistance.”

Last night, our fellow Americans courageously stood up and spoke out for democracy in the face of its fascist imposter.

Last night, our fellow Americans courageously stood up and spoke out for democracy in the face of its fascist imposter.

I would feel better if we found a chant that better reflected our values than “lock him up”.

I fear that our democracy is devolving into two violent mobs, each driven by passion and anger.

I think this is the actual intent of Mr. Trump’s puppet-master.

I think Mr. Putin has spent millions or even billions of dollars arming our right-wing insurgents with military-grade weapons using his bought-and-paid for NRA, together with their bought-and-paid for GOP assets. I think he has spent years fomenting hate, ignorance, and anger at “liberals” and Democrats. We know that Mr. Trump and the Trumpists have a bought-and-paid-for Ministry of Propaganda in Fox News.

Mr. Trump was not being “erratic” when he retweeted that civil war call to arms tweet.

I predict and expect a full-on assault on our democracy from these assembled assets. I think we minimize the risk of this at our extreme peril. I see no indication that any of the players on the other side are anything except dead serious about all this.

I expect them to loudly shout about “First Amendment” and “Freedom of Speech” if and when any effort is made to regulate or restrict these calls for violent overthrow.

I think this is, in fact, the “Second Amendment” solution that has already been bandied about the right-wing agitators.

I think we MUST remove these corrupt traitors from office. I think our most important challenge will be to do so with a minimum of bloodshed and while absolutely guaranteeing the 2020 elections and steadfastly preserving their legitimacy.

I think these chants of “lock him up” only make our challenge more difficult. That’s why I don’t like them.

If we can’t boo the President, what’s the point of the First Amendment? I think the chants were cathartic for the vast silent anti-Trump majority that is silent no more. For for every CNN or NY Times visit to some red state diner to talk to “real Americans” there is now a clip of 50,000 Americans who cheered for the troops and our national past time and resoundingly booed this pathetic president. The sane majority is finally fighting back.

I think booing the President is totally awesome and I would do the same.

It’s the “lock him up” chant that I don’t like.

I get the discomfort from stealing his lie about Hillary, but I see 40,000 patriots cheering on the rule of law over a lawless administration.

It’s not just stealing his lie. You see 40,000 “patriots”. I see a culture devolving into mob rule.

Locking up political opponents for political purposes is the hallmark of banana republics and tyrants.

When Daniel Pearl was executed on public media, there were some — even some Democrats — who demanded that America respond in kind. Fortunately, we did not.

We are supposed to be the good guys. We should make sure that our behavior always reflects that.

Booing is great. I think we should find a different chant.

Once again Trump has turned previous norms on their head. Prior to 2017 I would have looked cross-eyed at anyone who booed a President because for me it is disrespectful to the office regardless of how much you disagree with the incumbent. However, that was premised on the idea that the incumbent himself respected the office, which this one clearly does not.

I’m with Tom…two ranting mobs demanding people be jailed for political acts is a sign of a banana republic. Our political system is only as good as the people electing and encouraging our leaders.

Wouldn’t it be great is a speaker screamed out, “lock them up” and the crowd remained silent and looked horrified. When that day comes, the nightmare will be over. Not just the Trump monster, but all the hate we’ve been living with for years.

You’re both drawing the same false equivalencies between what Hillary did and what Trump did that helped elect him in the first place.

Group A: a bunch of old racist white people chanting “lock her up” to delegitimize the first potential woman president over a series of unfortunate emails. Some wearing “grab Hillary by the p———y” paraphernalia. Simultaneously condoning the very serious sex assault the president bragged about behind close doors while implying he should do the same to his political opponent. These were gendered attacks with Trump egging on the banana Republican factor by talking about “second amendment” people.

40,000 random baseball fans who went from cheering returning soldiers to reclaiming that infamous political chant as a civic act of patriotic resistance against a lawless president who sold out our country repeatedly to foreign powers for personal and political gain. The same president who is presently engaging in xenophobic and anti-Semitic character assassination against the one (highly decorated) member of his administration with the courage to tell the truth about his misdeeds.

This is an apples and oranges comparison. Trumps white nationalist mob was loathsomely dishonoring a female political opponent who ultimately broke no laws while this crowd of random patriots were crying out for justice and accountability against a runaway lawless executive. They were standing up for the soldiers and career public servants Trump has no qualms about destroying when they get in the way of covering up his misdeeds, not cheering on sex assault or militias as a way to nullify an election.

Apples and oranges? I don’t think so.

I’m not arguing that the two are equivalent. I think you’re making a logical mistake. Consider the following ascii diagram:

A says C, B says C. Does that mean that A is equivalent to B? Of course not.

I get that Trumpists want to lock up Mr. Trump’s political opponent without regard to legal niceties like actual convictions or even charges. I don’t think that obvious wrong makes it ok for people to chant “lock him up” to Mr. Trump.

35 thousand vehicles per day cross the bridge above where this material is being stirred up. https://twitter.com/grumpygrumpyowl/status/1221927594775523328

Have you ever woken up one morning and wondered: how do I clean up pesky arsenic-laden coal ash with a side of asbestos?