I blinked gently, and slowly, once, and then awoke in happiness. I realized my leader did not cause the debacle in Syria himself (for a mysterious reason) one week ago, even though he announced it in writing.

I suddenly could see that sanctions Trump is proposing on Turkey are really “tough” like the media just told me this morning.

Sure, ISIS is resurrected and will kill many, including Americans, and Russia has been handed a massive area of influence, and the Kurds, our friends, are “traitors”.

But those people are all the same and they’ve been fighting for “two centuries”. I know this is true because the new Secretary of Defense just told me that.

My leaderwould never take actions that put American soldiers’ lives directly in the line of fire just because of his personal financial interests.

And anyway, if an American is taken hostage and publicly tortured by ISIS, I’m sure Fox News, with the removal of Shep Smith, will quickly chase the next tennis ball my leader throws them.

My leader may hate dogs, but he clearly understands dog training.

This entire Syria issue is another perfect tennis ball.

Who’s talking about impeachment this week? 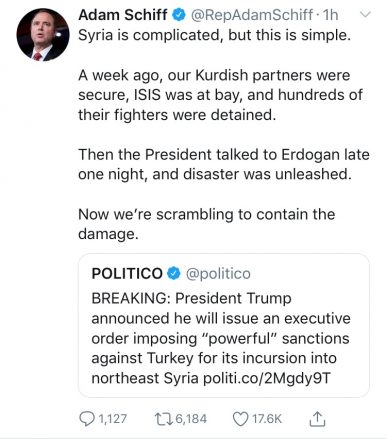 Adam Schiff treats our leader very unfairly. Schiff never gave him a chance. It is Schiff’s fault. He drove my leader to these actions.

On the Speaker and the Fool : by Kimberley Johnson :

:She said he’d self-impeach. He is.
She gave him rope. He’s hanging himself.
She said he’s melting down. He’s losing his s…
She’s calm. He’s hysterical.
She’s intelligent. He’s a f…… moron.
She knows what she’s doing. He doesn’t. I’m with her.”

On the Speaker and the Fool released iconic photo : “The last time Trump got his a.. spanked this hard by a woman, he had to pay her $130 K in hush money.”

We need to drop the “Quid Pro Quo” and call it what is was “Bribery”. Bribery is persuading another to act in one’s favor, typically illegally or dishonestly, by a gift of money or other inducement. Trump clearly bribed the president of Ukraine, asking him to act in Trump’s favor in exchange for something of value.

Article 2 Section Four of the US Constitution: The President, Vice President and all civil officers of the United States, shall be removed from office on impeachment for, and conviction of, treason, bribery, or other high crimes and misdemeanors.

“When this is over, when the lights are turned back on, it will become clear that there were only two kinds of people : Those who stood against Trump’s corruption, cruelty and degradation of American values, and those who enabled him.” Walter Shaub

Even he will be redeemed fast (unless, of course, we decide to really change the system we are in). Trump will probably get a tv show again.