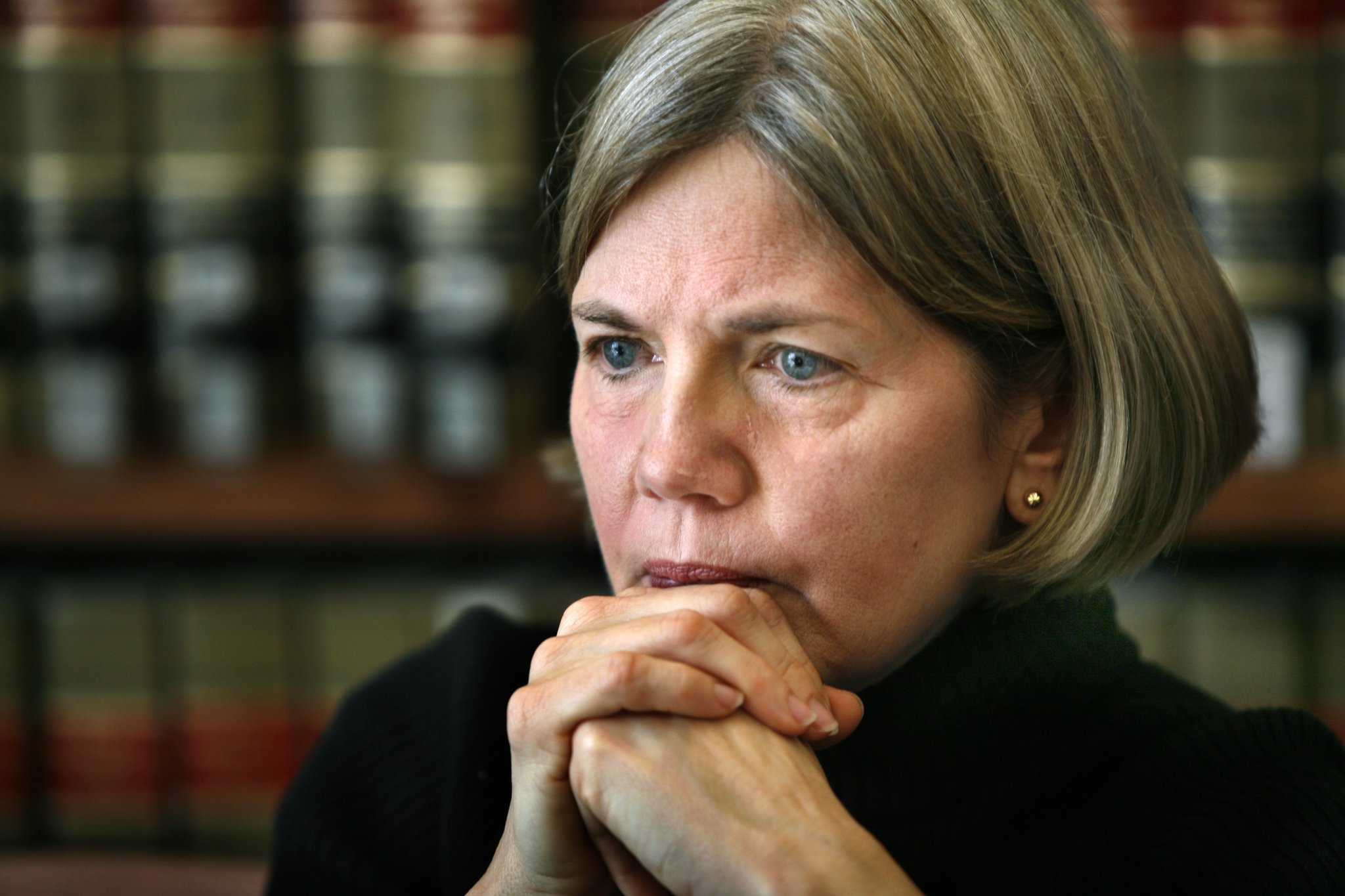 Senator Elizabeth Warren at Harvard Law School during her time as a professor there in 2006.

Two allegedly liberal bastions of mainstream journalism published hit pieces attacking Elizabeth Warren today. The New York Times ran a front-page piece attacking her for practicing her chosen profession. The Washington Post ran an opinion piece signed by the “Editorial Board”. I’m unwilling to give either piece the publicity of quoting excerpts — feel free to read them on your own.

What we’re seeing is the same demonization of Elizabeth Warren that took down Hillary Clinton, by the same allegedly liberal publications.

I will, however, quote the belated confession by CNN talking-head Jeffrey Toobin (emphasis mine):

The New Yorker and CNN’s Jeffrey Toobin now says he devoted too much attention in 2016 to Hillary Clinton’s private email server, becoming the first big-name journalist to acknowledge having second thoughts about the story since a State Department probe cleared Clinton of serious breaches of rules on Friday.
…
“I think I got into the trap of false equivalence during the 2016 campaign,” Toobin said. “Comparing Donald Trump’s record of ethical problems with Hillary’s emails lent a misleading impression. And I have to say, I am determined not to do that again to the extent that I can. I am going to try to look at corruption and ethics issues each on their own rather than trying to create some sort of equivalence that isn’t there.”

Mainstream media like the New York Times, the Washington Post, CNN, the New Yorker, and others bear significant responsibility for putting Donald Trump in the Oval Office and for putting the Trumpist GOP in control of the US government.

We see the same players doing the same thing now against Elizabeth Warren. Is it sexist? Absolutely — no male candidate would be similarly pilloried for practicing law. But we should not allow the sexism to distract us from the real driver.

Ms. Warren’s real “sin” is threatening to actually DO something against the wealthy men that own our economy and government. The New York Times is, of course, owned by the Sulzberger family. The current owner, Arthur Sulzberger Jr., has a personal net worth estimated at about $95M — not nearly as much as his counterpart at the Washington Post (Jeff Bezos) but still comfortably over the floor of Ms. Warren’s proposed wealth tax.

Mr. Bezos, owner of the Washington Post and CEO and founder of Amazon, is the wealthiest person in the world. He is also famously anti-union.

As the campaign of Joe Biden continues to collapse, we can expect the onslaught of hit-pieces like this to continue. For both Arthur Sulzberger Jr. and Jeff Bezos, Elizabeth Warren is a potent threat while Donald Trump is good for business.

An actual advocate of working-class men and women who intends to actually DO something about America’s obscene wealth concentration is a clear and present danger. That is especially true if Ms. Warren takes office with a Democratic majority in the House and Senate.

I am interested in how the Elizabeth Warren campaign will handle this predictable aspect of her new front-runner status.

Methinks thou dost protest too much. The Post piece obviously disagrees with her on charters, but doesn’t get personal or demonize her IMO. The Times takes a look at her legal work and struck me as fairly balanced.

I invite you to offer a link to comparable pieces about Joe Biden or Bernie Sanders from either publication. I think the most similar pieces to these are the “fairly balanced” pieces each publication offered about our 2016 nominee.

I don’t know if such exist and I don’t think that’s the point. It’s a long campaign and I was only evaluating each of your links on its own merits rather than comparing to other candidates. Let’s not be so cultish that the only articles about our favorite candidate we will accept as valid are those that unreservedly sing that candidate’s praises.

I, of course, agree with that. There is a middle ground between “unreservedly [singing] that candidate’s praises” and clearly biased hit-pieces like these.

The Washington Post is owned by Jeff Bezos, the wealthiest person in the world (according to Forbes) and among the most strident anti-union and anti-labor voices in today’s world. When you evaluated the merits of the Washington Post piece, did you take the pronounced bias of the owner of the publication into account?

The teachers unions wield outsize influence in the Democratic Party,

As an educator, do you agree with that assertion? Did that factor into your evaluation of the piece?

How about this little zinger:

Other parts of the union-pleasing plan…

The losers in these political calculations are the children whom charters help. Charters at their best offer options to parents whose children would have been consigned to failing traditional schools.

It seems to me that any evaluation of this piece on its own merits should include the disclaimer that the owner of the publication is among the most strident and most outspoken anti-labor voices in today’s already raucous anti-labor climate.

Did you compare the “fairly balanced” New York Times piece with its headline? I somewhat agree with your characterization of the piece as “fairly balanced”. The point is that Ms. Warren practiced law. The job of any attorney is to be an advocate for their client, and Ms. Warren did that. Given that, what do you think is the point of the headline (“Elizabeth Warren’s Days Defending Big Corporations”)? My reaction is that the publishers of the New York Times wanted to run a piece that would damage her politically while avoiding explicit Fox-style outright lies.

I agree that a free and independent fourth estate is a vital component of a healthy representative democracy. I think a necessary part of that freedom and independence is full disclosure of the ownership interests of major publications.

I hope you agree that the hostility of the mainstream media towards Ms. Clinton played a major role in her 2016 loss. I am therefore perhaps hypersensitive about a repeat performance in 2020.

The plain truth remains that the New York Times and Washington Post, like CNN and MSNBC, are owned by wealthy individuals. America and the world relies on what’s left of our free and independent media to publish the information needed to help American voters make a responsible choice in each of our elections. I think we therefore need to remain very sensitive to the many ways that the wealthy owners of our mainstream media use their media assets to manipulate our political process.

The Russians are not the only agent attempting to influence our electoral process.

You seem to be presenting me with a false black or white choice. I very much disagree with the Post editorial on education, but I also do not see it as an outrageous hit piece.

I’m not trying to force a false dichotomy on you. I’m asking you to consider the timing of this piece, and therefore the motivation of the editorial board who wrote it. Whether or not it’s outrageous, it seems to me that it is nevertheless intended to slow or derail the momentum for Ms. Warren.

I don’t think they would have bothered if they thought Mr. Biden was still the front-runner. The comment downthread suggests that they aren’t much happier with Mr. Sanders.

I think this “liberal” publication is manipulating its editorial page to support the personal agenda of its owner. I guess that’s not uncommon, but it is new behavior for the Washington Post.

I think a piece like this should more explicitly clarify the paper’s relationship to Mr. Bezos.

I’m sure the timing is not coincidental. I’d be more motivated to state my concerns about a candidate at a time said candidate is rising in the polls too.

Do you agree with me that the piece should have included a clarification about Mr. Bezo’s ownership interest in the publication?

I’m not sure that’s necessary here. Maybe if there were an editorial defending Amazon to the hilt about something that would be appropriate, but otherwise I don’t think every Post editorial has to remind us who owns it.

How about this re: Sanders?

I haven’t seen similar on Warren yet.

“What Ms. Warren said was true but we’re still giving her three Pinocchios.”

Or this one where they falsely claim he flip flopped?

I appreciate the links to Post pieces attacking Mr. Sanders.

It seems pretty clear that the editorial board of the Washington Post dislikes any candidate who promises to address wealth concentration, is pro-labor and is pro-union.

The red lines that surround liberal proposals that are acceptable to the Washington Post appear to be fairly bright — “liberal” is fine, so long as nothing substantive is done.

Despite claims of independence and Bezos having no influence over editorial decisions, it’s tough to believe that with what has happened since he took over.

Same goes for the Globe, but they are mostly just lame and care not to cover real or important local issues rather than attack people.

Gov. Charlie Baker wants to add an $0.80 fee to each Uber and Lyft ride to help raise $100 million for the MBTA.

New @SFFed research shows that climate change poses big risks to our communities and our economy. I want to know what the Too Big to Fail banks are doing to mitigate this danger. https://www.reuters.com/article/us-usa-election-warren/warren-calls-on-big-u-s-banks-to-disclose-preparation-for-climate-risk-idUSKBN1ZL1VQ

MA not on track to meet cutrent climate goals. Instead @MassGovernor is allowing a massive toxic #frackedgas compressor 2 be built, the final link in a chain 2 expedite export of poisonous polluting "natural gas" from PA abroad & allowed sham study to enable it. #cancercharlie https://twitter.com/JenBenson_ABL/status/1219944598392451072

I applaud @MassGovernor for supporting the goal of net zero carbon emissions by 2050 - but what bold policies will he support to get there? We aren’t even on track to meet our current 2030 reduction goals. We’re running out of time, we need #climateaction now.

@MassGovernor 1. Accelerate the timeline. The world as a whole should get off of carbon sooner than 2050, and Massachusetts as a leader should certainly move faster. My colleague @craigaltemose has made this case well. https://twitter.com/craigaltemose/status/1179818196100157440 17/

That's our charge, if we listen to the science and the voices of the youth calling for change.

It's time to pick sides.

One note on yesterday's State of the Commonwealth climate announcement by @MassGovernor:

It's possible that a "net zero emissions by 2050" target will result in little to no improvement over the state’s existing legal mandate to reduce greenhouse gas pollution. [thread] #mapoli