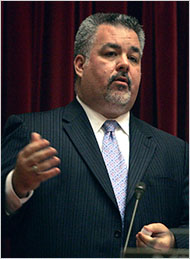 The New York Times reports that NY Governor Paterson has been interviewing candidates for the appointment to Hillary Clinton’s U.S. Senate seat, should she vacate it.

Two candidates, NY Assemblyman Danny O’Donnell and president of the United Federation of Teachers Randi Weingarten, are openly gay.  O’Donnell was recently interviewed by Paterson, and is the focus of the NYT article.  Weingarten threw her hat in the ring a few weeks ago.  If either is appointed, they would be the first openly gay person to serve in the U.S. Senate.

You can help us make government work better. Tell us where you see waste and abuse by government agencies or contractors. https://www.mass.gov/how-to/report-waste-and-abuse #MAPoli

AG and candidate for Governor @maura_healey is my guest on this week's episode of 'Let's Talk with Smitty.' She has taken on the biggest fights as the people's lawyer and will be a Governor for ALL of us. Visit https://linktr.ee/repsmitty to listen.
#mapoli

Be an informed voter for youth justice! Join the voter education forum in-person or virtually on August 16 from 1:30-3 PM. Learn more and register today: https://lnkd.in/ejEaKtXB #mapoli

I hope every voter in Suffolk Co reads and rereads this comment until they understand the implications of having a DA Arroyo so inexperienced that he is not qualified to sit as SECOND chair on a Suffolk Co murder trial as prosecutor or public defender. #BosPoli #MaPoli #NoArroyos

@orennimni This comment is woefully ignorant & verifiably false. Hayden spent 2x as many years as a defense attorney than Arroyo. Arroyo has so little experience that he does not meet the reqs to lead a jury trial, or even sit 2nd chair on a murder trial, as a public defender or ADA.

This account also loves to criticize @dakevinhayden for enforcing gun laws in communities most grievously impacted by gun violence. Does @ricardonarroyo agree w/ @CourtWatchMA that DA should deemphasize illegal gun possession? Will it be on his expanded #DNPlist? #bospoli #mapoli https://twitter.com/CourtWatchMA/status/1559220406371995648

Voting to tank the #NoCostCalls bill, and now endorsing DA Hayden over @RicardoNArroyo? I think its time for her to go. #mapoli