In February, the board approved the Gloucester Community Arts Charter School, for grades 4-7, on Commissioner Mitchell Chester’s recommendation.

Gloucester officials opposed the school, saying it would drain resources to benefit an elite few.

Chester had just received the letter Saturday and couldn’t comment before reviewing it, a spokeswoman said.

Gov. Deval Patrick said through a spokeswoman that he has confidence in Chester and the state education board.

Patrick “has been consistent and clear that review of the Gloucester charter required more transparency and has twice asked the board to restart its process and reconsider its decision,” spokeswoman Kimberly Haberlin said in a statement. “His view has not changed.”

This is not good news for the authors of the education bill awaiting House action.  The bill gives lots of new power to the folks who created this mess.  Lest we forget the words of Paul Reville:

Hope all’s well and warm in AZ. I appreciated our talk today and your openness and flexibility. This situation presents one of those painful dilemmas. In addition to being a no-win situation, it forces us into a political cul de sac where we could be permanently trapped. Our reality is that we have to show some sympathy in this group of charters or we’ll get permanently labeled as hostile and they will cripple us with a number of key moderate allies like the Globe and the Boston Foundation. Frankly, I’d rather fight for the kids in the Waltham situation, but it sounds like you can’t find a solid basis for standing behind that one. I’m not inclined to push Worcester, so that leaves Gloucester. My inclination is to think that you, I and the Governor all need to send at least one positive signal in this batch, and I gather that you think the best candidate is Gloucester. Can you see your way clear to supporting it? Would you want to do the financial trigger even in light of likely stimulus aid?

Thanks for not seeing this as an independence issue. It really is a matter of positioning ourselves so that we can be viable to implement the rest of our agenda. It’s a tough but I think necessary pill to swallow. Let’s discuss some more tomorrow. 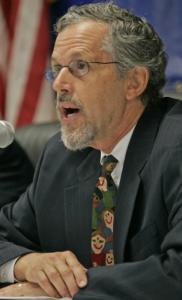 The BESE should act quickly and revoke this charter — their integrity and the integrity of this whole application and approval process has been sullied from the outset — and Chester ought to polish up his resume while he still has access to the company copy machine. His arrogant insistence in his own unimpeachable rightness has been a tough pill to swallow.

p>For that matter Reville’s indignation at the BESE meeting in November that anyone could possibly read anything untoward into his now infamous email to Chester was downright laughable. Just once I’d like to see someone in that kind of position say “I did a really stupid thing.  I am sorry and I will make it right.”

p>Bright lights on the BESE Kaplan and Chernow now have the ammunition to bring a proper close to this sorry chapter. If we’re going to have charter schools jammed down our throats instead of addressing and fixing the fundamental issues of public education, then by golly let’s at least have a process that at least appears to be fair.

the Globe editors talk about how a little thing like ramming a charter school into a community that doesn’t want it shouldn’t interfere with the charter school movement.

p>If I were the king of the forest, I’d put a moratorium on new charter schools, preserve those exist, and study them as the experiments they are. Real research, not the number juggling with test scores and state stats that we’re reduced to.

You know, I’m an English major and I just love political metaphors…they really do give you some insight into the mindset of people.  I love this:

In addition to being a no-win situation, it forces us into a political cul de sac where we could be permanently trapped.

p>Permanently trapped in a cul-de-sac?  Come on – people who live in cul-de-sacs leave their homes and go to work everyday.  The trick…Mr. Reville…is to go out the way you came in; either back up or turn around – which is what you should do with this charter school.

then feel free to borrow it!  I haven’t decided yet if these people are incompetent or naive.

At the conclusion of a 12 page letter in which the IG outlines how Commissioner Chester overstepped his authority in overruling his own CSO’s “do not recommend” recommendation:

p>”As stated above, the 2008/2009 charter school application and approval process administered by BESE and DESE ended in the granting of a charter to GCACS in violation of the provisions of law, regulation, and procedure. This occurred because the GCACS charter was granted without the authorizing entity having determined that the applicant met the rigorous criteria established by the comprehensive application process in accordance with established procedures. For this reason, the OIG concludes that the GCACS charter was never validly awarded and should be deemed void ab initio.”

p>Essentially this application should never have been presented to the BESE for a vote. Now the question is what will be done about it?  JG

for the school year 2010/11.  Good news for the Gloucester Public Schools FY11 budget.

p>The larger question is will the Governor and the Board insist on a strict or loose application process for Charter Schools.  A strict system should insist that any Charter School be required to reflect the population of the public school in which community it exists.

p>It’s time to level the playing field between Charters and Public Schools.  It’s time to stop taking resources away from Public Schools and leaving them with the neediest students to educate.  It is baffling to me why the Governor doesn’t understand this.

Why is it that people so unfamiliar with the basic legal environment of their jobs still have them?

p>Not that Deval seems to be a big believer in the principle of accountability, at least until the media tells him it’s important…

Someone who would willingly throw a city of 30,000 under the bus to further their political agenda has no business being in government.  The fact that Reville still has a job reflects very poorly on Patrick.