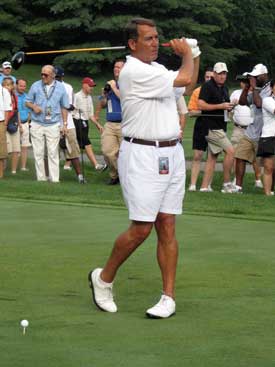 Demonstrating that he is, among other things, colossally tone-deaf, Speaker of the House John Boehner decided to hit the links the other day during a trip to Florida.  This photo (HT Kos) is apparently not of that precise event, since it was (surprise!) closed to the press, but it does show off Boehner’s splendid legs.

This is exactly the kind of behavior that Boehner had no trouble criticizing a few years ago, when Bill Clinton was president and the government was again in danger of shutting down.

In the run up to the last government shutdown in 1995, Boehner criticized then-President Bill Clinton for playing a round while Congress continued its work.

Now, to be fair, Boehner has offered a “plan,” at least in the technical sense.  But his plan is a joke.

The [House-sponsored] CR [Continuing Resolution] would extend government financing for two weeks after Obama signed the bill and its cuts would be prorated to reflect the $100 billion in cuts approved in last week’s CR. In other words, the $4 billion in savings would be roughly equal to the cuts the CR called for if carried out for just two weeks….

“The Republicans’ so-called compromise is nothing more than the same extreme package the House already handed the Senate, just with a different bow,” said Jon Summers, [Senate majority leader Harry] Reid’s communications director. “This isn’t a compromise; it’s a hardening of their original position. This bill would simply be a two-week version of the reckless measure the House passed last weekend. It would impose the same spending levels in the short term as their initial proposal does in the long term, and it isn’t going to fool anyone. Both proposals are non-starters in the Senate.”

Perhaps it’s time to start a betting pool on how long Boehner, who is apparently neither able to control his caucus nor to craft legislation that has any prayer of becoming law, retains the Speaker’s gavel.