States like Virginia are rightly viewed as a collection of diverse interests. Why isn’t Massachusetts?

Having lived inside Washington’s Beltway for 10 years, I can tell you the view of Massachusetts from down there looks like this: 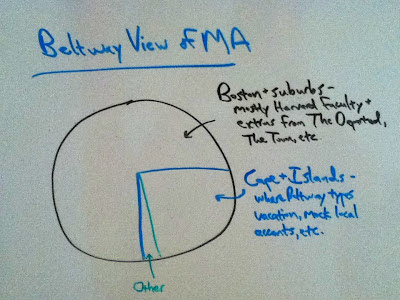 This is partly why you see so many stories out of DC about Elizabeth Warren “struggling” in the U.S. Senate race. She’s Harvard faculty, isn’t that like 25% of the Massachusetts electorate? 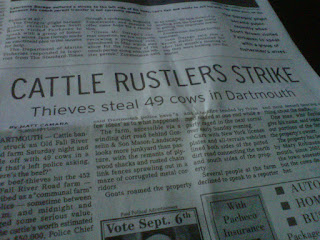 But the state’s actual voters defy stereotyping. Even the headlines of the Standard Times of New Bedford (population 100,000) can be dominated by cattle being rustled and rescued. Cows can still wander onto interstate highways and disrupt the morning commute.

From Gloucester to Sheffield, it’s not hard to find towns whose economies still depend heavily on fishing and farming. Voters there want to actually listen to what the candidates have to say, not just vote blue because that’s their predetermined political destiny.

(And that’s why Scott Brown is desperately trying to be all things to all people in every corner of the state. “He’s for us” is the most generic political slogan since Clint Webb’s “Hey … me?”)

(Unless there was probable cause to suspect they were planning to overthrow an election, I think FBI may have made the wrong call)

“When Black folks in America pick up weapons, a different set of rules has always applied. That was the case 100 years ago; that remains the case today.”

As mostly-white militias thrived under trump era, the FBI honed in on NFAC, an all-Black group:

Uyterhoeven, Erika filed: H.4209 - An Act defining a domestic partner as a spouse and dependent as to the city of Somerville https://malegislature.gov/Bills/192/H4209 #mapoli

Tune in now! Rep. Shawn Dooley is testifying at the hearing at the Joint Committee on Election Laws.
https://malegislature.gov/Events/Sessions/Detail/4028 #mapoli

It's #mapoli redistricting time and we at @The_HorseRace need your favorite weird shaped district and what you think the shape looks like. What are these?