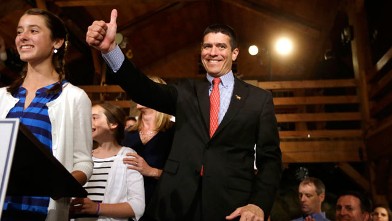 Gabriel Gomez’s incoherence on climate science and energy policy makes a lot more sense once you take a deeper dive into his personal finances, as Joshua Israel did at ThinkProgress:

A ThinkProgress review of Gomez’s personal financial disclosure filings reveals that a significant amount of his own money is invested, directly or indirectly, in dirty energy stocks and bonds. These include investments of between $1,000 and $15,000 each in:

By doing the dirty work of his out-of-state polluting investments, Gomez is turning his back on the more than 71,000 people who work in Massachusetts’ booming clean energy industry. He’s also ignoring the impacts that climate change is already having on Massachusetts – stronger storms like Sandy, rising sea levels, deeper droughts, and deadlier summer heat waves.

As I’m knocking on doors for Ed Markey in the weeks ahead, this story speaks to the one thing I’ll be telling undecided voters: Gomez is so beholden to big money – polluters, national Republicans, shady tax breaks – that we just can’t trust the guy to do what’s right for Massachusetts.

Kudos to @RepMcGovern of Massachusetts who has been a consistent voice & leader on #FoodSecurity & #HumanRights issues nationally & globally. This week’s summit was years in the making. Grateful to know Jim, & to even share a birthday with him! #mapoli https://www.wgbh.org/news/national-news/2022/09/28/rep-mcgovern-calls-white-house-summit-on-hunger-a-turning-point

We’re so close to our EOM goal and need YOUR help in these last few hrs to ensure our outreach exp are covered heading into OCT.

Unable to contribute? Sharing our call to action is greatly appreciated as well. Less than 6 wks to go!#kalkut4rep #mapoli

This hurricane sucks but watching capitalists begging for socialism to save them is amazing.

With the upcoming #November8 election, find out more info about the 4 questions that will be on the ballot with @SenSusanMoran on the @PACTVMedia Video Share channel on YouTube: https://youtu.be/T8ARlfp3EOY

Morning, Mass.☀️ As Maura Healey pours millions into TV advertising in the governor's race, Geoff Diehl has yet to air an ad and appears unlikely to soon. Why? Money. Plus:
— Delegation members want Buttigieg to investigate DeSantis migrant flights https://politi.co/3dSm27S #mapoli

Blatant structural racism, while wealthy, white city neighborhoods & nearby towns ghast at the thought of injection sites & #Quincy continues to hold up any fix of the Long Island bridge, its children of color who pay the price. @MayorWu #Boston #mapoli https://www.bostonglobe.com/2022/09/28/metro/park-where-youth-football-teams-practice-is-even-more-littered-with-dirty-needles/