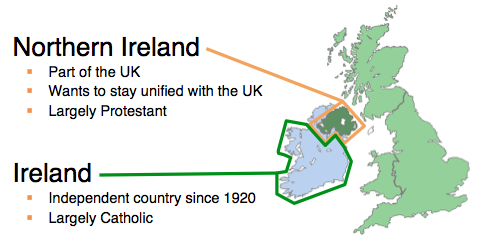 and did an excellent job explaining the current trouble in Ireland and how the whole Boston College situation has thrown a stink bomb into the fragile peace in Ireland. A copy of the radio program can be found here. A copy of the TV show can be found here. Since my work computer does not have a sound card, I have no ability to embed these directly into this diary and test them, so hopefully following the links is not too much of an issue.

I did not hear either program until their rebroadcasts last night. Otherwise, I would have written earlier, but I must say it was refreshing for once to actually hear about this situation without having to wade through a cesspool of baseless personal attacks and insults, IMHO of course. Points I had not considered included:
1) Because the UK is one of the few allies in the wars in Iraq and Afghanistan, the US is probably unwilling to defy one of our few friends.
2) There are exceptions in our treaties that allow the US to not turn over information, and because of the fragile peace accord and its potential disruption, these exceptions could apply in this situation.
3) When John Kerry was the junior senator under Senator Kennedy, he would speak out on the side of supporting a peace process, but now that he is Secretary of State, he has said “almost” nothing.

First, BC has publicly offered to return all records of the interviews back to the interviewees so the records can be disposed of. How is this different from putting Tsarnaev’s knapsack in a dumpster?
Second, a few years ago the Globe announced a policy of not allowing a reporter who had views on a controversial subject to cover the subject.
The incident resulted after a stringer with a pro-Palestinian blog covered protests at Brandeis.
Cullen’s personal views on Northern Ireland are well known, because those views are in the Globe all the time. Yet the Globe still uses him on news stories. Why the inconsistency?

Because … well … because it’s the Globe.

The abandoned the pretense of objectivity in its reporting some time ago. I offer any piece by Noah Bierman as evidence.

We're open 2-8pm today! Unrelated, this weekend, we are participating in #icecreamforchange's efforts to raise money across the country for anti-racist organizations. The flavor we're making is Ed Markey's Green New Deal (With It) Mint Chip. It will be f… https://instagr.am/p/CCq2wHEgsWx/

It is imperative that the MA legislature pass the 100% Renewable Energy Act before 7/31. It lays out the direction we must head on climate. Can't imagine what the opposition even would be. Be a #100PercentHero @SpeakerDeLeo @MarjorieDecker @seangarballeyMA @EnviroLeagueMA

I just requested mail in ballots at http://edmarkey.com/vote

It's simple - took me about 2 minutes to arrange to have mail-in ballots sent to me for both the primary and general. Do it today, and vote for Ed!

The @MA_Senate is debating a key transportation bill on Thursday. Here's a quick 🧵on the 6 amendments that made @T4Mass's "Priority Support" list, plus links to more info. Please take *30 seconds* to contact your Senator by visiting: https://www.t4ma.org/ourmove #mapoli #OurMove

This is disastrous. People will die because of this.