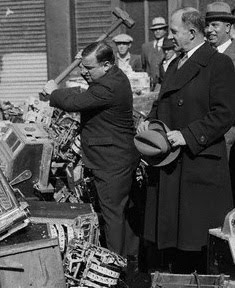 Pointing to the clear and substantial evidence that government-sponsored slot machines are dishonest, harmful to frequent users and contributing to rising inequality and unfairness in America, citizens will smash a modern slot machine in a reenactment of how legendary leaders like former New York City Mayor Fiorello LaGuardia and US Supreme Court Chief Justice and one-time California Governor Earl Warren approached businesses that cheat and exploit ordinary citizens.

As a leader who many scholars view as the greatest mayor in American history, La Guardia personally smashed many slot machines during his term of office as mayor because he hated ordinary citizens getting exploited and cheated – particularly lower-income citizens who could least afford it, and particularly when politicians were involved in it. The closest thing to LaGuardia on the other side of the country was Earl Warren who led efforts to destroy hundreds of slot machines because they were in his words, “dishonest in operation and cruel in practice.”

Participants include: Melynda Litchfield, National Victims Advocate for Stop Predatory Gambling and a former registered nurse in Illinois who for a period of her life was seriously addicted to slot machines after state government located them near her home; citizen leaders from the surrounding states of Massachusetts, Connecticut, Rhode Island, New Hampshire and New York, all of whom are working to stop predatory gambling in their own states; John Ribeiro, Chairman of the Repeal the Casino Deal campaign; and other Massachusetts citizen leaders who believe government should promote fairness and equality of opportunity and not willfully cheat and harm its own people.

WHERE The front steps of the Massachusetts State House, Beacon Street, Boston, MA

WHEN: Wednesday, Oct. 29, 2014 from 10am -1pm. Citizens are invited to view and learn about how the slot machine works between 10am-12pm. In the spirit of Mayor La Guardia and US Supreme Court Chief Justice Warren, the slot machine will be smashed about 12pm.

Hope you can join us.

Republicans, who have won the popular vote just once in seven presidential elections, have now appointed 6 of the 9 Supreme Court justices.

Kavanaugh’s definition of “flipping the results” is like saying that a football team trailing by 10 that scores two touchdowns in the fourth quarter “flipped the result”. No they didn’t. They won. Just count all the damn votes. https://twitter.com/ryanlizza/status/1321085424715128834

These dueling opinions from Kavanaugh and Kagan on mail-in ballots may be the most important story of the day:

Kavanaugh: late ballots could “flip the results of an election”

Kagan: “there are no results to ‘flip’ until all valid votes are counted”

The Dems, and anyone to the left of center, must have a plan to counter and inoculate people from the conservative media-industrial complex.

As long as there’s money to be made from right-wing extremism, that industry will thrive and take 40% of the country with it.

The absolute most terrifying thing right now is — despite everything that’s happened over the past 4 years — and despite the fact that Trump is directly responsible for the catastrophic Covid response — Trump *still* could win the race if a few key states go his way.

Come on, if you can rank your donuts in the morning at Dunkin’ you can rank candidates on a ballot. It’s not complicated.

The Republican #SCOTUS majority is announcing that it will do anything it can to help elect Trump-whatever the consequences to the Court or country. And that's before Barrett arrives. Can't see Biden/Ds acquiescing like Gore did. If it gets close, extraordinary turbulence ahead. https://twitter.com/mjs_DC/status/1320873994032205824

Holy shit—Brett Kavanaugh just endorsed Rehnquist's concurrence in Bush v. Gore, which was too extreme for Kennedy or O'Connor.

This is a red alert. I can't believe he put it in a footnote. This is terrifying. https://assets.documentcloud.org/documents/7276432/10-26-20-DNC-v-Wisconsin-SCOTUS-Order.pdf