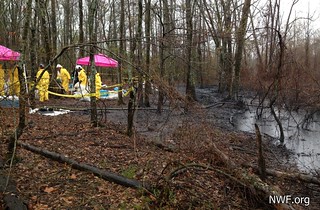 The U.S. Senate is expected to vote today on a bill that would short-circuit the safety and environmental review for the Keystone XL tar sands pipeline, overruling sound science with polluter politics. The Boston Globe editorial board has a three-part plan to approve Keystone XL:

So a veto now shouldn’t mean that Obama ought to reject Keystone categorically — just that approval ought to be predicated on bigger concessions by Congress on another part of the president’s environmental agenda. The goal should be to reduce emissions and boost energy efficiency, rather than block pipelines per se. […]

The Environmental Protection Agency is expected to announce new rules on ozone standards and toxic coal ash as well as restrict greenhouse gas emissions from future power plants. There is little Congress can do to stop these regulations, but simply dropping threats to undercut them through the appropriations process — as Senate Republican leader Mitch McConnell has vowed — could be key. Indeed, securing a promise of inaction from legislators determined to hobble the EPA could alone be a victory worth allowing Keystone XL to go forward.

The House has already voted nine times to send the pipeline project to the president’s desk for approval. The Senate, once it’s under Republican control come January, will surely pass another measure to that effect. The president would be wisest to bide his time. If the new GOP Congress wants Keystone so badly, it should be willing to negotiate a comprehensive climate deal.

This is delusional for two reasons. First, we have no hope of slowing global warming – never mind eventually achieving a stable climate – if we keep saying yes to every polluting project asked for by big polluters. Enivornmental Protection Agency carbon pollution limits and fuel efficiency standards are a good start – the equivalent of a 600-pound man going for a 20-minute walk every day. But building Keystone XL would be like rewarding ourselves for that walk with a large pepperoni pizza. Coming off the hottest October on record globally and on pace for the hottest year on record, only a carbon crash diet can avert catastrophe.

Second, it’s fantasy to think today’s Republican extremists have any interest in compromise or good policy. As Jay Rosen has pointed out, this is pure media sentimentalism. The GOP refused to negotiate on a climate and energy bill in 2010 and since then has only grown more hostile to policy solutions. “Republicans were not elected to govern,” declared Rush Limbaugh. “The desire to prove Republicans can govern also makes them hostage to their opponents in the Democratic party and the media,” echoed the National Review.

President Obama is right, Keystone is a Canadian export pipeline, plain and simple. Oil companies want to use our country to transport Canadian oil, and now they’re trying to ram this export strategy through Congress.

When the Senate debates this pipeline on Tuesday, I will back up the president on this point and argue against using America as a middleman for foreign countries’ energy interests.

Elected officials say they always get complaint calls, but rarely hear thanks. If you have a minute, please call or email Sen. Markey and Sen. Warren to thank them for standing strong against Keystone XL.

The first is that Obama caves, or Senate Dems cave, or some combination on our side caves and this thing actually passes with bipartisan support giving it that centrist mantle while setting back future efforts to actually control emissions. On the heel of his landmark but largely overlooked agreement with China, it seems Obama will probably veto.

The second fear is that progressives succeed at killing this and the backlash, whether gas prices rise or some other Middle Eastern oil scare occurs, stalls momentum on future progress. This resistance should be expected either way, but we should prepare not to stop the fight if we win this battle.

The third fear is that industry already knows they lost this round, and are getting worse projects approved that have not attracted the kind of scrutiny we put to this single and increasingly symbolic battle. The stuff in the Dakotas, the fracking in PA, and the push for Eastern coastal offshore extraction have larger environmental and emissions and by focusing on Keystone we may have taken our eye off the end game these industries have for other critical areas.

The Alberta tar sand mines, source of the Keystone XL oil, are an ongoing and horrendous disaster, fouling entire watersheds and burning three barrels of oil for every four barrels produced. The Native population of the area is being poisoned through their water supply, and have nowhere to go.

Another Native population, Sioux in South Dakota, say approval of the XL pipeline would be “an act of war” against their nation.

[Rosebud Sioux Tribal President] Scott said the creation of the pipeline would violate the 1868 Treaty of Fort Laramie, an agreement between the Sioux and the US government allocating parts of the Dakota territory to the Sioux. He also said he has not been consulted by the US government or TransCanada, the Canadian company behind the 1,700-mile pipeline.

Is Mary Landrieu really worth this?

Especially since she loses her seat either way, but we lose a significant environmental victory if we cave.

My point is-I dislike tunnel vision on these sorts of issues. Keystone is important and should be stopped, I wasn’t trying to undercut it, but I get worried when oil barons like Harold Hamm argue it’s not a big deal to their bottom line either way-on the one hand, that undercuts all the economic arguments of Keystone advocates. On the other hand-it means Hamm and his buddies are getting their tar sand oil from other sources and other methods, just as devastating, that we don’t even have on our radar let alone our crosshairs.

KXL is about momentum: If polluter allies succeed in jamming it through, it’ll be much harder to stop other projects. If we beat KXL, we carry that momentum with us to stop Kinder Morgan, and Portland-Montreal, and Enbridge, and Alberta Clipper (and believe me, KXL isn’t stopping us from fighting all those, too)

You now have that momentum. May it carry us all into a more enlightened age.

The environmental review could still come up ‘positive’ and Obama will still have to kill the vote. Landrieu’s sad desperation apparently led her to ask progressives to vote for it to ‘give Obama something to veto to make the base happy’. Anything to keep her oil friends happy. A Democrat I won’t be missing.