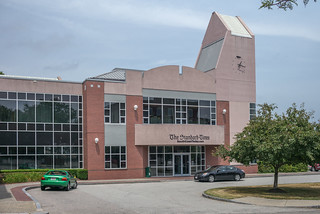 Local newspapers provide a valuable public service that I want to support. But how many newsroom layoffs does it take to make subscription fees feel more like a corporate subsidy than a common good?

Bob Unger, universally respected editor of the New Bedford Standard-Times, is quitting in the face of corporate pressure to lay off more journalists. “We’re looking at a tough year, revenue-wise, coming up,” Unger tells colleague Steve DeCosta. “it would have been very damaging to the newspaper and the community to make the additional personnel cuts that would have been required.”

In 2014, newspapers are like sports teams: If you’re lucky, yours has an owner who doesn’t mind losing money. But unfortunately, as the Boston Globe’s Jon Chesto reports, the Standard-Times is one of many New England papers with corporate ownership trying to squeeze out every possible penny of profit:

Unger’s departure is the latest shake-up at New Media Investment Group, the new parent company of GateHouse Media that has been growing its New England presence. Last year, Rupert Murdoch’s News Corp. sold the Standard-Times, the Cape Cod Times, and affiliated weeklies to the company that is now New Media.

The company’s more recent local acquisitions include deals to buy The Providence Journal, the Telegram & Gazette in Worcester, and Foster’s Daily Democrat in New Hampshire. GateHouse earlier bought a number of daily papers in Massachusetts, including The Patriot Ledger of Quincy and the MetroWest Daily News in Framingham. In many cases, the takeovers have been followed by job cuts. But Unger said he isn’t blaming the company’s management for a shrinking newsroom.

Yet even as the Internet erodes the printed paper’s value proposition, subscribers are expected to keep ponying up hundreds of dollars a year for a worsening product:

“They’re trying to find the right answer for both their owners as well as for their individual communities,” Unger said. “It’s a tough balance. . . . Everybody in this business is making hard decisions based on a disruptive new technology.”

When Unger joined the Standard-Times as editor in 2005, he said, there were 56 full-timers in the newsroom and a dozen part-time employees. Now, there’s a full-time equivalent of 36 people, he said.

The worst part of national corporate ownership is that I wonder if they even care about long-term decline. Would they prefer to just wring out every drop of short-term profit they can, then take the write-down when the paper goes belly-up? What do today’s stockholders care about subscriber numbers and quality of coverage 10 years from now?

This week, the Christmas-bloated advertising circular section of my Sunday Standard-Times weighed noticeably more than the news section. How much lighter does the news section have to get before it’s no longer worth my $4 a week? Sounds like the New Media Investment Group is going to keep cutting until we find out.

I have great deal accepting that Bob Unger is anywhere near “universally respected”. Unger had kept up an unrelenting campaign of attack on the New Bedford public schools, excusing the misplacement of funds, justifying mass firings sight unseen, rationalizing inaction in the face of student violence toward their peers and adults, and praising administration despite a record of failure. I can’t speak comfortably for other issue areas, but in the area of education, Unger has displaced an ignorance and mean-spiritedness that is seemingly inexhaustible.

I can’t say for certain that Unger’s ongoing diatribes drove so many subscribers away from the paper that it endangered its bottom line. I can say with confidence that many subscribers have left the paper in the wake of Unger’s direction.

Gatehouse now owns virtually every paper in SE Mass. All the weeklies became part of the dreadful Wicked Local operation – Cape Codder, Register, etc. Now it’s also the Barnstable Patriot and the CC Times, and almost all the papers in the south coast region.

So far, they do not seem to care about content. I know Uncle Rupert was hated here, but he really did give editors a lot of freedom to choose content. Now, Gatehouse papers run one another’s articles and columns, passed around among the papers like a STD posing as ‘new’ content. No town meeting coverage, no local interest coverage – and in rural areas/suburban places, it means a complete lack of information and transparency since we don’t exist to the WBZ’s of this world unless we kill somebody or produce a calf with two heads.

The only guy I knew on the S-T left a while ago, and I don’t regularly read that paper but I credit the guy with refusing to re-arrange the deck chairs prior to chucking them overboard.

The loss of local media is a shame. Gatehouse is a wreck and has been for a while. But using this journalistic hack as an example of the loss just isn’t a strong case. There has to be a real loss from this trend but Unger isn’t it.

is a shadow of its former self. When they can’t even correctly draw a picture to show a news location, and when their articles appear to have been composed on the back of coffee house napkins, cf. the articles on Southfield which are basic fluff, then it is time for me to drop my subscription. Gatehouse makes cable tv look good again.

Massachusetts Poised to Do the Wrong Thing by Taking Over Boston Public Schools https://dianeravitch.net/2022/05/22/massachusetts-poised-to-do-the-wrong-thing-by-taking-over-boston-public-schools/ via @dianeravitch #MAPoli #MAEdu

And the people who gasped at Rayla's comments weren't liberals. They were her own people. #mapoli

#mapoli #bospoli what are our political and business leaders doing about these gas prices?🤔🤷🏽‍♂️💯

That's great that you're tweeting through it, but you do that know you're going to (checks notes) "get owned by the libs" in November b/c of tweets like this, right? #mapoli

Nomination locked up! Happy to bring a little energy with my audacious acceptance speech. Good to show a little chutzpah now and then. Glad the soy boy crew with @MattPStout and the Planned Parenthood gang looked on with chagrin. Nothing makes me happier.

This was a challenging quote for Massachusetts journalists over the weekend. #mapoli https://www.bostonglobe.com/2022/05/21/metro/massachusetts-republicans-gather-springfield-with-trump-backed-geoff-diehl-likely-get-activists-nod/?event=event25