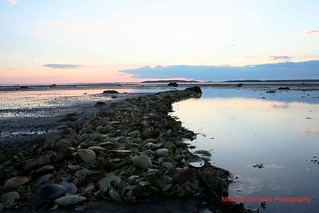 Ocean acidification fueled by climate change is accelerating faster than previously thought and could have devastating effects within just a few decades, according to a new study from University of California at Davis, Ocean Conservancy, Duke University and National Resources Defense Council. Unless we confront industrial carbon pollution right away, it could have huge ecological and economic effects on top oyster and clam fisheries, including Massachusetts, reports Michael Casey of CBS News:

Factoring in a region’s economic dependence on the industry and local environmental conditions such as agriculture runoff that might exacerbate ocean acidification, the study identified 15 states most at risk from the impacts. They include Massachusetts, New Jersey, Virginia, Washington, Oregon, Connecticut, New York, Rhode Island, Maine, Florida, North Carolina, California, Louisiana, Maryland and Texas.

“Our analysis shows acidification will harm more than ocean creatures; it will have real impacts on people’s lives,” said Lisa Suatoni, NRDC Oceans Program Senior Scientist. “It will pinch pocketbooks, it will put livelihoods at risk, and it will alter the fabric of communities all across the country.” […]

[UC-Davis’ Julia] Ekstrom also said work needs to be done to make these coastal communities aware of the threat and to ensure that places like southern Massachusetts – a region which depends more than any other in the country on shellfish- can start to adapt to by diversifying their economies or shifting into other fisheries.

“It doesn’t mean getting out of shell fishing but we need to understand better what it means to them,” Ekstrom said. “They are going to be the ones who can figure out how to become resilient to these global changes.”

And this is just one page in one book in a library of ways that climate change is hitting home here in Massachusetts, from more extreme weather to rising sea levels to higher food prices. In the face of a crisis like this, how can we even think about building new polluting infrastructure like fracked gas pipelines?

For some recommendations on a clean path forward, read about this new report from the MA Senate Committee on Global Warming and Climate Change or download the full report (PDF).

Ocean acidification fueled by climate change is accelerating faster than previously thought and could have devastating effects within just a few decades, according to a new study . . .