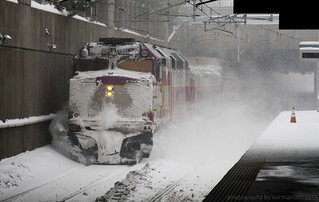 As WBUR’s Zeninjor Enwemeka reports, a group of Massachusetts legislators rode the commuter rail this morning and got a representative ride:

In an effort to better understand the challenges — and headaches — faced by public transit riders this winter, dozens of state lawmakers rode the MBTA and the commuter rail Thursday morning.

About 47 lawmakers took part in what is being called Gov On The T Day.

At South Station, many of the state representatives who rode the commuter rail said they experienced delays, overcrowded trains and waits in the cold — issues commuters have been dealing with all winter.

But if Gov On The T organizers thought a first-hand look would break Beacon Hill’s decades-long refusal to spend what’s necessary to get the T back on track, they were wrong:

It’s a sentiment Pollack has expressed before as the MBTA struggled during the last two months. And other lawmakers Thursday agreed, saying they want to get a better understanding of how money is already being used on the state’s transit system.

“There really needs to be some good oversight of the whole system,” state Rep. Kay Khan, of Newton, said. “It’s complicated, but in this day and age it seems to be that we should be able to figure out how to make it a better system. I don’t know if we’re ready to pour in money at this point until we really know what we need to be doing and then take a look at what the cost will be.”

Look, oversight and investigations are fine. But if your mechanic told you she could fix your car without spending a dime on it, would you believe her? Anyone who tells you they can fix the MBTA without investing in maintenance & upgrades is selling snake oil.

The truth is lawmakers want to fix the MBTA, but not more than they don’t want to raise taxes. Until that changes, commuters should bundle up & bring their patience, and businesses should expect work to keep not getting done as their employees run late.

Here’s another quote from Ms. Pollack in the cited article:

“The main limitation is the lack of working locomotives,” Transportation Secretary Stephanie Pollack said. “Once they have a full fleet of locomotives, they will get back to a full schedule in April.”

The reason they do not have “a full fleet of locomotives” is that the locomotive fleet is well beyond its design life, includes several used locomotives acquired from other systems, and had insufficient funding to perform required maintenance for nearly all their lifetimes.

If you run a car without maintenance for years — no oil changes, no tuneups, nothing — then when it wears out, it’s DONE. It’s too late to repair it, it must be replaced.

Locomotives failed this winter because they were in terrible shape to begin with. The “full fleet” in “April” that Ms. Pollack refers to means “once we get these junkers taped back together and once they don’t have to run in cold weather”. A junker runs better in the spring too.

I’m disappointed to see Ms. Pollack taking this posture. She contributes to the dishonesty that is destroying the system. It is further evidence of the street-smarts of Dr. Scott in departing when and how she did.

…from an administration that “always starts with the premise that people are already taxed enough”:(

will challenge this view, vigorously, in support of their party platform which clearly sets forth their values and priorities and guides everything they do that has actual consequences in the real world.

Unless, that is, those Democrats are in absolute, complete, 100% agreement with the Republican governor on this issue.

In which case you might as well say “I guess that’s what we get from a Legislature that pretends to be Democratic, but really isn’t.”

I expect no challenges from the legislature.

Whatever their individual stances, Mr. DeLeo has ensured that “the legislature” will do exactly what Mr. DeLeo wants it to do, and Mr. DeLeo’s publicly stated posture is that the people are already taxed enough.