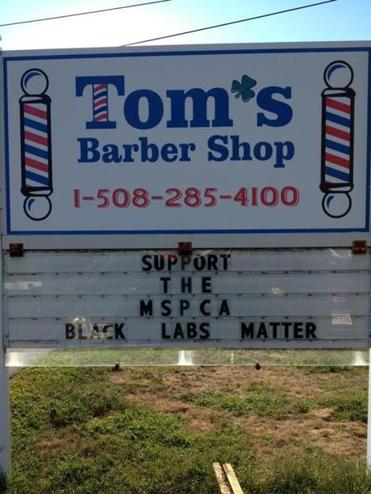 For a guy who so vehemently claims to be not racist, Tom Stevens sure does have a racist Facebook page.

First, the story from Steve Annear in today’s Boston Globe:

A barber in Norton is being criticized by some people for posting the phrase “Black Labs Matter” on a sign outside his shop in an effort to solicit donations for the Massachusetts Society for the Prevention of Cruelty to Animals.

Tom Stevens said he considered himself a likeable guy with a sense of humor. And the idea that people are misconstruing his message as something racist is a “far reach.”

The phrase is similar to the slogan “Black Lives Matter,” a national protest movement that was spurred by the deaths of unarmed black people during confrontations with police officers in recent years.

“Everybody is trying to make me something I’m not,” said Stevens, who has owned the barber shop on West Main Street for 10 years. “People are really reaching.”

Here’s the thing: If you accuse non-racists of racism, they usually work to make amends. They don’t put up gleeful “as seen on TV” signs, as Stevens did.

As it turns out, you don’t even have to “far reach” back to last week on his Facebook page to find Stevens sharing racist Facebook memes.

Here’s a post from Tuesday featuring the Confederate flag, which even South Carolina now admits is a racist symbol. 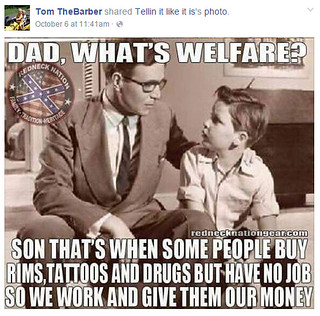 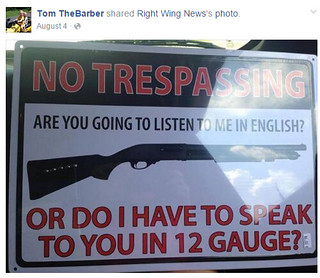 I only made it back to July, because this one takes the cake: 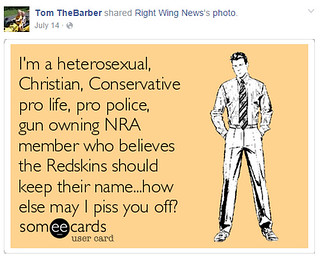 On Facebook, Stevens is all YEAH I’M RACIST I SAID REDSKIN DEAL WITH IT. And what exactly does “pro-police” mean? Seems like a direct shot at the Black Lives Matter movement that Stevens would have us believe he’s indifferent to.

But when people outside his Facebook circle point out “hey, that guy’s racist,” suddenly he claims he’s not and wants to act like he’s the victim of the BIG BAD PC POLICE. Makes him look less like a brave truth-teller than a cowardly racist.

And hey, I fully support your right to be racist, because this is America, where you can be a 9/11 Truther, or an alien abduction believer, or a racist. You can’t act on it, either via violence or discrimination, but if your self-esteem is so low that you need to pretend you’re superior to someone else just because, go for it.

The flip side of that is that the rest of us have the right to LOL you and urge people not patronize your racist business.

UPDATE: One more from Stevens’ Facebook page (someone else posted it to his page & Stevens liked it). Remember, Stevens told WJAR, “If people take a play on words and they want to make it a racial thing, that’s in their heart, that’s not in mine.” 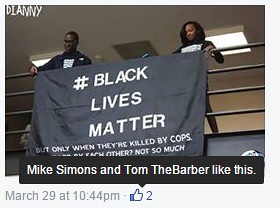