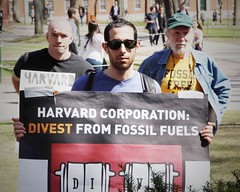 A new report from the Energy & Policy Institute warns many of America’s universities continue to be hooked on dirty energy funding, with Harvard University highlighted as one of the top offenders:

Universities and professors, funded by fossil fuel and utility special interests, are increasingly producing academic reports, supporting advocacy efforts, and amplifying positions that either recommend policies or provide credence to what the energy industry seeks to achieve in the legislative and regulatory arenas. […]

Here’s a link to the full report on the Harvard Electricity Policy Group. The Harvard-Smithsonian Center for Astrophysics is also called out for hosting a leading fossil fuel-funded climate science denier:

Willie Soon, a researcher at the Harvard-Smithsonian Center for Astrophysics in Cambridge, Massachusetts, was funded by the energy industry, including Southern Company, to deliver research denying the mainstream scientific consensus on climate change, claiming global warming is being driven by the sun.

Harvard has steadfastly refused to divest its massive endowment from fossil fuels even as coal and oil stocks have tanked in recent months. Universities that have committed to fully or partially divest include Stanford, Georgetown & Syracuse in the US, and Oxford in the UK, part of a $3.4 trillion movement worldwide.

At least one other local university cut its ties to dirty energy money last year:

Richard Berman, the notorious Washington insider, routed money to Suffolk University’s Beacon Hill Institute to publish reports criticizing the Environmental Protection Agency’s rules cutting carbon dioxide from power plants. Months after the funding was revealed, Suffolk University announced that it will cut ties with the Beacon Hill Institute, specifically because the institute could no longer raise money under university guidelines favoring transparency, which the university began to implement.

If Trump associates with clowns and attention-seeking grifters like them, there’s no way in hell I’m supporting him in 2024. #mapoli

Trump repeatedly ignored calls to disavow white nationalist, who has since turned on him https://washex.am/3AR6DNe

Which reminds me we have a royal delegation @KensingtonRoyal coming to peddle #ClimateScam in Boston this week as part of @EarthshotPrize #EarthShotPrize #EarthshotBoston2022 being welcomed by one of #WEF #Agenda2030 championing darlings @MayorWu.

Linda Champion, Esq. 🔥🥰🤩 comments are my own @attychamp ·
3h

I am honored to support @maura_healey and @MayorDriscoll as a member of the Jobs and a Flourishing Economy for All transition committee, alongside so many incredible leaders from across the state! #mapoli @theULEM #readytowork

Gov-elect @Maura_Healey and Lt. Gov-elect @MayorDriscoll have announced the membership of their transition's policy committees. The Western Mass names range from past & present senators to @Baystate_Health execs. #mapoli https://www.wmasspi.com/2022/11/western-mass-has-starring-supporting-roles-on-healey-policy-panels.html