With the Democratic Primary only a day away voters have a clear view of whose running for Governors Council.

The Progressive Democrats of Massachusetts endorse Terrence Kennedy for Governor’ 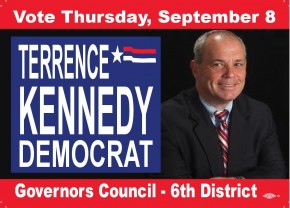 s Council.  They see that he has the liberal track record to continue to choose qualified judges, and judicial appointees.

In an unprecedented show of support the, the following labor unions endorse Governor’s Councilor, Terrence Kennedy:

I’m getting very fed up with this sanctimonious deflection from Baker. Who was it that chose to reopen indoor restaurants, gyms, casinos and other places that propagate the idea that things are back to normal? I’m not absolving irresponsible individuals, but come on, man. #mapoli https://twitter.com/BostonDotCom/status/1289308032715776000

The next time you hear a politician -- especially a Democrat -- say natural gas is a necessary "bridge fuel" to stop climate change, ask them what they think about these two studies.

Checking out the pilot bike lanes around the Common and Garden today. I feel safer using them, and the parks do too! ⁦@FOPG⁩ ⁦@bostonbikeunion⁩ ⁦@BostonParksDept⁩

since getting my e-bike i almost never drive. it has really transformed my day to day life. and you can even get real exercise in if you just reduce or turn off the pedal assist. https://earther.gizmodo.com/riding-an-e-bike-has-changed-my-entire-perspective-on-h-1844575886

Today is James Baldwin’s birthday. James Baldwin is my hero, so I’m going to post some quotes that might make you wonder if he’s still alive.