The Globe posted that Curt Schilling held a rally at Boston City Hall today, they estimated that a few dozen people, yes, two dozen, like 24 people showed up. That estimate looks charitable as the photograph looks more like 12 people to me. 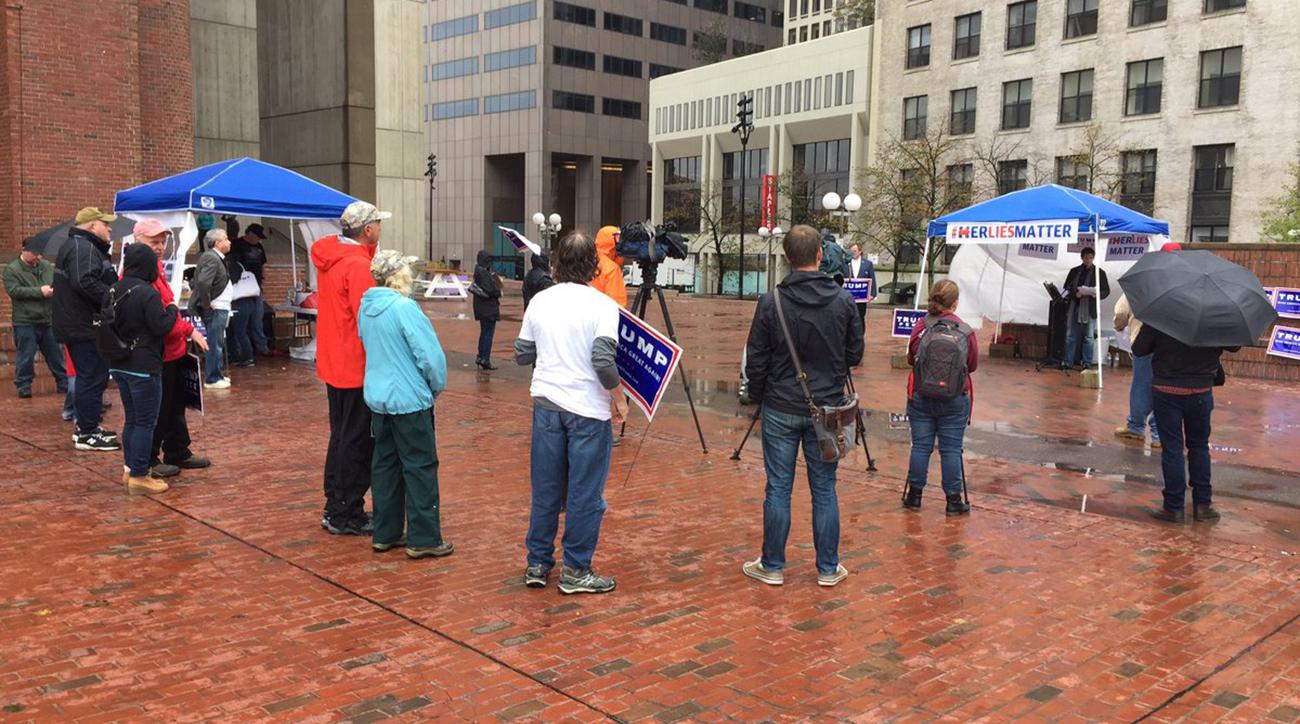 Then he encouraged people who haven’t made a decision to not vote, since their values, thoughts and opinions don’t matter unless they align with his. But since no one was there I’m not sure exactly who he was talking to.

The former All-Star had this advice for potential voters who don’t support either Trump or Clinton: “If you’re not informed, do not vote, because on the table right now is two to four Supreme Court justices and the future generations of our Supreme Court.”

Seems like a great guy. Must have promoted it on his radio show/podcast.

I am having the best kind of flashbacks to 2004. So happy for my wife (who rooted for the Sox when we won in 2013) and all my Northsider friends, especially those who’s grandparents never got to see this.

for us Red Sox folks are in the series. Best of luck to the both of them!

Instead we’re stuck with this guy, great.

After Schilling’s performance on CNN and MSNBC Friday night (worthy of a post itself, but no time) in which he displayed his barroom level debating skills (throwing out generalizations that made him look anti-semantic and stupid, while blaming the media for everything) two conservative friends of mine, who hate everything Hillary and Warren, are praying he doesn’t run.

They’ve made their peace to vote for Trump, but apparently have drawn a line in the sand and they can’t get behind any more stupid people running for office (gee that’s a break-through) and are hoping for someone of substance to challenge her. (But the only names they could think of was Weld or Romney–who is a CA resident).

And I was shocked these two ardent Warren haters said to me that a Schilling candidacy would force them to vote for Warren.

This story provides more evidence supporting my earlier speculation that the waning days of this campaign (and perhaps the entire exercise) are part of the post-election launch of a Donald Trump/Steve Bannon alt-right media network.

Today’s dominant GOP voice, Fox News, was similarly launched in the final stages of Robert Dole’s failed campaign against Bill Clinton. In the minds of the mendacious alt-right universe, even Fox News is too “liberal”.

The stunt about accepting the outcome of the election, the relentless claim of the election being “rigged”, the pandering to the “base”, the lies about polling, the complete contempt for any tactics that might actually affect the outcome of the election all support the premise that we are watching the orchestrated launch of a new media empire funded by Donald Trump, operated by Steve Bannon, with a goal of displacing Fox News by pulling their audience even more rightward into the rarefied atmosphere of the alt-right breitbart universe.

Curt Schilling fits perfectly into this new venture. He also epitomizes today’s Massachusetts GOP — Charlie Baker and a handful of alleged “moderates” notwithstanding.

…but he really comes across as a professional hockey goalie from the days when goalies did not wear head protection…..

Some of those old school goalies actually had some redeeming qualities… 😉

I’m more inclined to compare him to a pro wrestler who doesn’t realize he doesn’t have to stay in character all of the time.

Well now we know why he’s been on cable news saying stupid stuff, getting his name out there to advertise the show.

Even though I disagree with Schiilling on everything outside baseball, I thought better of him than this. Breitbart makes the Daily Caller look like the Wall Street Journal.