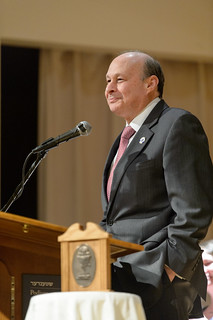 Stan Rosenberg has become the highest-ranking current elected official in Massachusetts to endorse Yes on 4, the ballot question to legalize marijuana:

Senate President Stan Rosenberg says he’s planning to vote for a ballot question that would legalize the recreational use of marijuana in Massachusetts.

The Amherst Democrat said during an interview Thursday on WGBH-FM that he will vote for Question 4 and then try to make improvements to the measure. […]

A poll released Wednesday by WBUR-FM found 55 percent of voters back the ballot question, while 40 percent oppose it.

It’s unfortunate that some Democrats, like House Speaker Robert DeLeo, Attorney General Maura Healey and Boston Mayor Marty Walsh, continue to oppose legalization in the face of majority public support. It’s one thing to take a moral stand against popular opinion, but opposing marijuana legalization is both wrong AND unpopular.

Marijuana is less of a health risk than alcohol and tobacco, both of which are legally available to adults. As the Globe has reported, research shows that in the Netherlands, where marijuana is legally sold in cafes, young marijuana smokers are slightly LESS likely to take up harder drugs than their counterparts in the United States and other countries.

Despite “decriminalization” in Massachusetts, statewide arrest rates for marijuana possession were 3.3 times higher for blacks than for whites in 2014, even though research shows blacks and whites use marijuana at similar rates, as the Globe reported.

On the ballot questions, I’m on board with Progressive Massachusetts: No No Yes Yes.

…to get something through the legislature along these lines?

Is @joekennedy ’s father moving his leftover campaign cash to help him?

How does that fit in with this? 👇

@BrianPhillipsJr @EdMarkey In the interim, could you suggest Joe’s dad return the Globe’s call to answer whether his old campaign dough is being shifted into the race?

Microsoft is going carbon-*negative* by 2030.

Don’t let your reps characterize that as a success. The MA House continues to fail at the basics of protecting the public.

This @Vox explainer from @drvox does a great job breaking down our commitment to be carbon negative by 2030. We want to push ourselves, and our industry, to do better when it comes to fighting climate change. https://www.vox.com/energy-and-environment/2020/7/30/21336777/microsoft-climate-change-goals-negative-emissions-technologies

Don’t know who needs to hear this, but “Kennedys getting shot” jokes are not funny and not OK!

If stuff like that is funny to you, please stay far far far away from @EdMarkey - this isn’t your scene.

Genuinely disgusted by the comments under this tweet. Revolting and not at all “progressive.”

I hope that Senator Markey and his team publicly condemn the violent rhetoric of some of his supporters. It’s about time he does. https://twitter.com/alxthomp/status/1291574194610638848

.@AmbassadorRice still has millions invested in oil and gas companies?

Including over $100,000 in TC Energy that’s building Keystone XL?

Aside from the self-congratulation in House:

A yawning gap between the dire need + public consensus on strong climate action; and the House’s barely-effectual Roadmap bill.

“The current legislation would get [MA] to 100 percent renewable electricity by roughly 2090.”