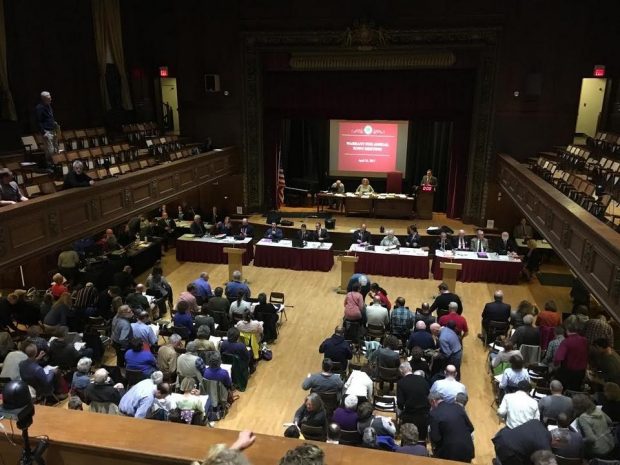 Today 173 Town Meeting Members voted in favor of Warrant Article 59, 19 against, and 10 abstained. For me, the heart of this non-binding resolution – for which I voted as a matter of my sacred honor – in support of liberty and humanity was in this paragraph:

“BE IT FURTHER RESOLVED, that Town Meeting supports and encourages each Town department and official to refuse to gather information regarding the religious or ethnic identity of any person for the purposes of ICE detentions and deportation actions or the creation or maintenance pf a registry of individuals based upon their religious affiliation, ethnicity, or national origin…” For me, it is “sadly” that the resolution went on to also state “…unless required by valid federal or state law, or directly relevant to business between that individual and the agency or department.” That this language was also in the resolution is “sadly” for me. In its time, The Fugitive Slave Act was a valid federal law, and good men and women went to prison for assisting runaway slaves. I am certain I would not have complied with The Fugitive Slave Act had I been alive at that time.

In their time, the laws of Nazi Germany that led to the state murders of millions of my people [Jews], gays, gypsies, and others were “valid laws”.

I know from my own personal history and actions I have taken that “valid federal laws” creating such a registry are laws I would not obey, without going into details here as at times I have obeyed a higher law, without regret, and disobeyed “valid laws” to ensure the safety of vulnerable people.

I think of Anne Frank, and know that immigration laws and certain other laws can be valid but immoral. Sometimes, what is honorable and right is not the same as what “valid laws” require. The times that try soul and conscience are when the demands of a valid law are so wrong that conscience must trump law for life to remain worth living, and honor to remain intact. So while I could not vote against this resolution, I do find it weaker than I would have preferred in protecting human rights and standing against hatred.

Here is the actual Resolution as passed, in full, with the comments published along with it: [click the link below to read it — it’s worth it — CB]

.@EdMarkey has been my Senator since 2013. As a Western MA resident (and former Holyoke City Councilor), I have been actively involved with my community for many years. I pay attention to who shows up. Senator Markey shows up in Western MA and represents me well. THREAD: #MASen

I am proposing that we invest $5 billion annually to rapidly expand and improve passenger rail across Massachusetts and the country.

I am voting for @EdMarkey because he fights hard for #WMASS cities like #easthamptonma. #SAFERgrant #mapoli