After the Republicans pulled Trumpcare last March, I looked at the challenge faced when the Speaker of the House viewed himself as an uber-Majority Leader rather than an officer of the entire house.

The New York Times reported last March on the Republican members of Congress who were declared as opposed to Trumpcare. It was a split between the Freedom Caucus and the moderates who brought the bill down in March.

How did they get the reluctant voters on board? They seduced the Freedom Caucus. This map shows the Republican representatives who were identified as NO in March, but voted YES on May 4. The color codes: 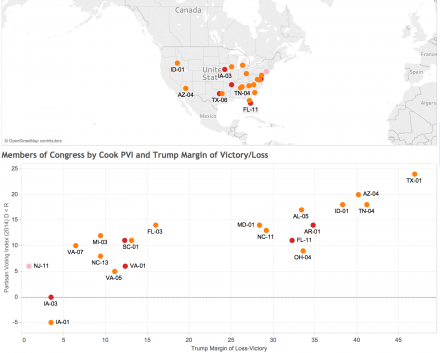 When you look at the bottom chart, you see the Republican representatives who bought religion. They skew to the right (higher margin of victory for Trump) and higher (higher Republican score on the Cook PVI).

This is a significant contrast to the Republicans who were opposed to Trumpcare in March and voted no on May 4. When you look at these folks, the chart has lots more pink dots and they represented districts that were further to the left. 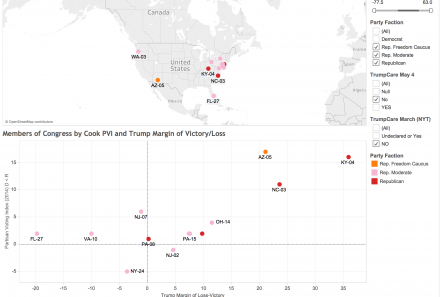 The graphs are produced using Tableau (interactive display below), and you can filter by party or by the NY Times faction among the Republicans. You can filter by reported vote in March, actual vote in May, and by Cook PVI and Trump margin of victory.

I think it is a fun toy, and I hope you will enjoy playing with the data. 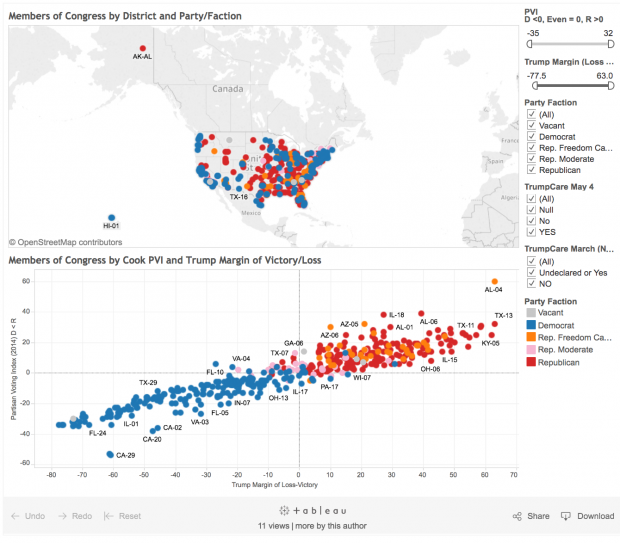 Great stuff Pablo! And I’ll include myself alongside the media and progressive punditry who misidentified the moderates as the faction to win over instead of the Freedom Caucus. I really thought they weren’t gonna budge before the moderates. Kudos to the 20 Republicans who voted against this thing-and keep an eye out on the ones like Peter Roskam and John Faso in blue districts who voted for this monstrosity. Nate Silver is projecting they could lose 10-15% of their supporters over this vote, which would be enough to possibly deliver the House back to Democrats.

But-we should still work our asses off to beat this in the Senate. Midterm gains are not worth the millions of lives that could be negatively effected by the passage of this bill.

First, go after the GOP “yes” votes in the House.

I agree, work the Senate. But don’t let the House members off the hook. Senators are going to watch and see how much heat their in-state colleagues in the House get now, after the vote.

We need a thumbs-up function so I can thumbs this comment up.

Charley on the MTA
Admin
Noble Member
Reply to  centralmassdad

Working on it … There are a number of comment plugins that I’m looking at – want to accommodate as many of the community’s stated preferences without spending too much $$ and maintaining speed …. It’s on the punch list!

stomv
Active Member
Reply to  Charley on the MTA

stomv
Active Member
Reply to  Charley on the MTA

Christopher
Famed Member
Reply to  Charley on the MTA

What about being able to identify who uprated/downrated the diaries themselves?

Trumpcare is the easy to remember name…. More accurately, it could be named Republi-care.

What’s mind bending is that the Trump base has no benefit in this Republican health plan. Wealthy investors would get their 3.8% Medicare investment surcharge cancelled. The Hospital Insurance tax for high wage workers (>$250k for married filing jointly) would be cancelled also.

So what’s in it for the ‘regular Republican Joe’?

Best thing I saw on the television this past week was a statement by Charles Krauthammer on FOX who said that since Obamacare was passed, Americans now see health care as a right and do not want it taken away, and the only way to make that possible is with single payer.

Really, Charles Krauthammer on FOX said this. (no I do not watch FOX as my main source of info but do check in see where my right wing pals are getting their crazy “facts” from)

Charles Krauthammers knows that single payer is inevitable. It is my opinion that the people at the Heritage Foundation knew it as well when they conceived the original blueprint for Obamacare with private insurers, pre-existing conditions covered, and a forced mandate in a last ditch effort to keep this in the hands of private corporations.

Trump was right in that Obamacare will collapse under its own weight, but not because “lazy people will want free things” (the reason most working class right wingers oppose it), but because it’s impossible to cover health care for all citizens with a patchwork quilt of private companies all seeking to make a profit;.

My advice to Democrats is to run in 2018 and 2020 not on bringing back Obamacare, but instead, bringing Medicare for All or Single Payer as our next move forward.

And Donald Trump (probably unwittingly) acknowledged this when he told the Australian PM that his country has a better system than ours. Australia has single-payer. Bernie Sanders’ reply was, “Thank you, Mr. President; we’ll quote you on the Senate floor!”

My advice is to defend health care as a right and run on offense-save Obamacare and then fix it with a public option, Midlife Medicare and Medicaid for kids. Then when we get the WH run on Medicare for All. I cannot stress this enough to single payer advocates that Trumpcare passing sets the movement back not forward.

On @bluemassgroup, in advance of his conversation tomorrow with @BostonGlobe @GlobeOpinion's @binajv, I compile the numerous concerns folks have about #MA04 candidate & Globe endorsee Jake Auchincloss:
https://bluemassgroup.com/2020/08/ma-04-after-endorsement-questions-for-jake-auchincloss-monday-at-noon/

Hoping *all* of these concerns get addressed. #mapoli

1. I don't even like telephones.
2. I'm going to be super irked if this goes the other way.
3. So: Phone bank. Wednesday. Sign up.
4. #StickingWithEd because of the #HomeworkGap is now the #SchoolingGap, and our kids can't afford that. #mapoli #MAedu

If you help our campaign get out the vote in these critical final weeks, we will win on September 1. Sign up for shifts at http://edmarkey.com/events.

About 6 hrs after #MVGas explosions, @EdMarkey's office reached out to discuss. He was on the case constantly from day one. Glad to see this day come. https://twitter.com/EdMarkey/status/1292156915733221376

We will not allow corporations to sacrifice the safety of our communities to make a profit. The passage of this bill is a huge step toward justice for the families of Lawrence, Andover, and North Andover. https://www.eagletribune.com/news/merrimack_valley/rondon-gas-safety-bill-passes-us-senate/article_55d84f7f-4137-5eee-8692-0a205183dd5e.html