Last year, the Massachusetts NRA accused me of signing on to a “campaign of intimidation, confusion and fear.”

The pro-gun group was talking about a letter I signed with 18 other mayors in support of Attorney General Maura Healey’s work to enforce the assault weapons ban. A few weeks earlier the same group organized a rally in which Maura was compared to Adolf Hitler and called a tyrant. The Gun Owners Action League, the NRA’s Massachusetts arm, has led an aggressive campaign against Maura and her staff at the Attorney General’s office. They’ve called the public health crisis caused by guns a “false narrative.” They even mocked Hillary Clinton as “Heartless Hillary” because she spoke out against gun violence. 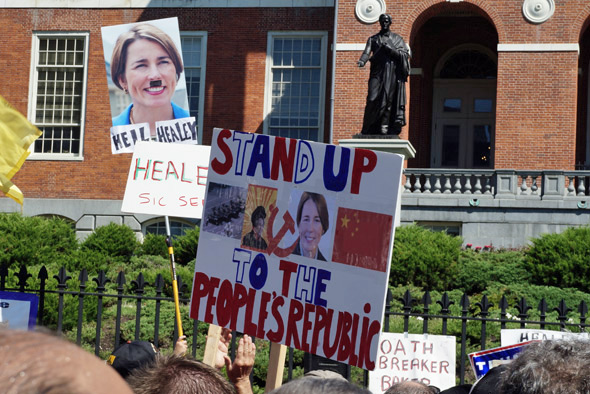 Last week, Gov. Charlie Baker announced his plans to appoint the head of this group, Ronald Amidon, to lead the Department of Fish and Game. Per Governor Baker’s decision, the leader of a pro-gun organization is now in charge of a department which issues firearms-related permits across the Commonwealth.

At a time when the NRA is working to make our country and the Commonwealth less safe, it’s absurd that Charlie Baker would reward one of their leaders with a plum state government job to score political points with his right-wing base.

Baker knows that he won his 2014 race with the slimmest of margins. He also knows that Donald Trump received more votes in Massachusetts than he did. He needs to keep the hard right wing of the Massachusetts GOP in line and this is one of the ways he’s doing it.

This is not the Commonwealth we want to be. We need to be having open, transparent conversations with voters; finding out what outcomes they need. Playing hard politics and making shady appointments isn’t how we ensure no person in the Commonwealth slips through the cracks.

Gun violence is tearing communities apart. We should be focused on making our communities safer, not rewarding the people who think we need more guns on our streets. We must stand up to Baker and the NRA.

Great meeting with @macarlosgonzal1. @BECMAinc looks forward to working with you to support the small businesses of the 10th Hampden District. #mapoli

So far, that's not something she seems inclined to do: https://www.wgbh.org/news/politics/2023/02/02/as-healey-ramps-up-environmental-focus-some-advocates-demand-more #mapoli @gbhnews

This is utterly reprehensible. #mapoli
Hard No on HD.3822

Prisoners in Massachusetts may soon be forced to choose between their organs and their freedom: Democratic legislators in the state are proposing a law that would allow prisoners to donate organs or bone marrow to get up to a year off their sentence. https://jacobin.com/2023/02/massachusetts-democrats-prisoner-organ-bone-marrow-donation/

Proud boys held "Free Speech" rallies at the beginning of Trump's presidency; used violence to overturn an election at the end.

Organizing got @massedjustice this far. It's past time for communities like Lawrence and Boston to have true self-determination. Listen to parents, students, educators! Invest in what works, do away with failed strategies. #maedu #mapoli

I was honored to have met @OfficialMLK3 and @ArndreaKing on the House floor yesterday. I am deeply humbled by their commitment to advancing justice and educating & empowering our young leaders #mapoli