BOSTON, July 10, 2017- Sheila Decter, Founder and Executive Director of the Jewish Alliance for Law and Social Action (JALSA), and a tireless advocate for social and economic justice, civil rights and constitutional liberties in a career spanning five decades, has announced her plans to step down as executive director of JALSA this Fall.

The JALSA board of directors has named Cindy Rowe as the new executive director, effective September 1, 2017. JALSA will celebrate the outgoing and incoming leadership on September 14, 2017 from 7-9pm at Temple Israel, or as we like to call them “The Wonder Women of Jewish Social Justice.” There will be additional details available about this event in the coming weeks.

“Sheila built JALSA from the ground up into the force it is today. She has been a leader in the Jewish social justice movement for decades and has dedicated her entire career to fighting for the rights of others. Her work ethic and progressive vision will always be the bedrock of our organization,” said JALSA Board President Larry Bailis.

“As JALSA takes on the next chapter in social justice history,” Bailis continued, “the board is thrilled to announce that Cindy Rowe will be leading the charge as executive director, starting this fall. Cindy has been with JALSA since it’s inception and her policy and development expertise is unparalleled. We know that she will take JALSA to the next level during these uncertain political times and will chart a path forward for social justice advocacy in the Jewish community,” President Bailis concluded.

Prior to JALSA, Sheila served as Executive Director of the New England Region of American Jewish Congress for 23 years. She was also the Assistant Director of the Jewish Community Relations Council of Greater Boston and taught political science at Northeastern University and at Lasell College as chairman of the faculty.

“Civil Rights and social justice have been a lifelong pursuit for me,” Decter said. “My jewish values have always guided my career and taught me the importance of working to make our communities more responsive to the needs of the most vulnerable. I am incredibly proud of all that JALSA has accomplished over the past 16 years, from supporting religious liberties to civil rights to earned sick time, JALSA is now, has been, and will continue to be a leading voice for social justice and that work is more important now than ever before.”

Decter continued, “I am excited to see Cindy Rowe step into the role of Executive Director. Cindy has worked with JALSA to advance progressive policies since our organization was founded. She spearheaded all of JALSA’s development initiatives, served as a leader on the Strategy Committee guiding the passage of the state’s most recent gun violence prevention law and so much more. I know she will do a phenomenal job leading JALSA in the next chapter of social justice advocacy.”

In addition to her work with JALSA, Cindy serves as the Social Justice chair at Temple Israel, which pioneered the concept of using community organizing in a synagogue setting over 10 years ago, leading to the adoption of this technique in hundreds of synagogues across the country. She also has many years of advocacy experience, having worked in the Massachusetts State House for both the Administration and Legislature.

As Executive Director, Cindy Rowe will strengthen JALSA’s leadership role in advocacy with state and local officials and engage a wide range of urban and suburban groups in progressive policy campaigns. Cindy combines her academic background as a lawyer with her public policy and community organizing expertise, in addition to her knowledge of the Massachusetts nonprofit and political communities.

“I am delighted to be selected as the next Executive Director of JALSA,” Rowe stated,”and I know the work Sheila, I, and many others at JALSA have been involved in over the past decade and a half will not only continue but also grow. As such, we will fight as passionately in the future to defend the values of opportunity, equality, and fair treatment for everyone in our country.  I look forward to empowering our members across the Commonwealth, making their voices heard in the State House, at the Capitol, and in our courts.”

JALSA’s pursuit of justice is based on Jewish values of Tikkun Olam (repairing the world), and we are building the resources necessary to deepen this work. JALSA members are multi-generational, ranging from their 20’s to their 90’s, and participate in visits with legislators, serve on policy strategy teams, create coalitions, provide educational workshops, and submit amicus briefs. 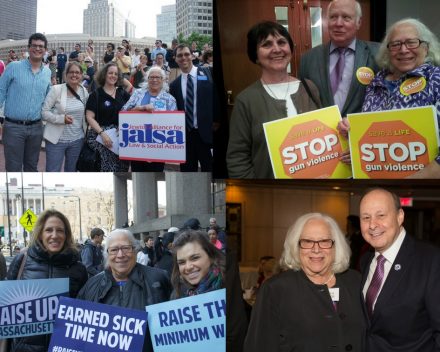 ##
Devoted to the defense of civil rights, the preservation of constitutional liberties, and the passionate pursuit of social, economic, and environmental justice for all people, JALSA is a statewide organization with members who are creating a world that is more compassionate and just. For more information on JALSA’s work, visit www.jalsa.org.

If you are a member of the media who would like more information on JALSA’s leadership transition, please contact Rachael Dubinsky.

@drdavidsamadi I think Dr Samadi is mistating the Italian govt's requirement, which is to show the Green Pass, which indicates the person has recieved atleast one vax jab, has natural immunity, or tested negative in the last 7 days and agrees to wear a mask https://www.npr.org/2021/09/24/1040550745/italys-new-covid-vaccine-mandate-is-one-of-the-strictest-in-the-world #mapoli

Is the Dem’s ambitious and needed #BudgetReconciliation investment bill inside it? I sure as hell hope not. @100isNow @ProjectDrawdown #mapoli

The drowning Prius—a perfect metaphor of our response to the climate crisis.

@boxbrown Check out this MSO w Jerry Garcia and other breads. Mold PM investigations happening. Much more to report on this update this week. OSHA CCC Monson BOH https://midnightmass.substack.com/p/mold-at-holistic-industries-monson?r=sajw&utm_campaign=post&utm_medium=web&utm_source= #mapoli

Suffolk County Sheriff Steve Tompkins wants to commit people living in tents near "Mass and Cass" to a former detention center in the South Bay House of Correction. https://wbur.fm/3i5pCdG

To listen/testify at the hearing: https://malegislature.gov/Events/Hearings/Detail/3974. We don’t know what time testimony will be heard.

* If you are Indigenous & plan to testify, please notify info@uaine.org by Thursday for planning purposes.