UPDATE: This morning, 36 hours after Trump’s attack, Kraft finally put out a statement saying, “I am deeply disappointed by the tone of the comments made by the President on Friday.” 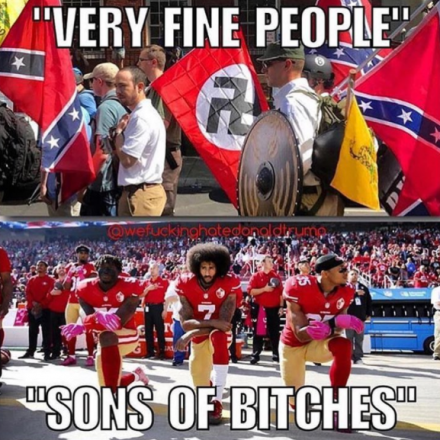 President Trump, who defended murderous white supremacists after the Charlottesville attacks, made vulgar attacks Friday night against black athletes who silently protest racist violence. Dozens of prominent athletes including LeBron James and the Patriots’ Devin McCourty responded by publicly dunking on Trump. But as ESPN’s Mike Reiss points out, while commissioner Roger Goodell and at least 11 other owners have stood with free speech, Patriots owner Robert Kraft has been conspiciously silent:

It’s something Patriots-loving progressive Massachusetts doesn’t like to talk about, but … the Patriots love our white supremacist president. Kraft, Belichick, Brady – all have publicly expressed support for Trump (Kraft donated $1 million to Trump’s shady inaugural slush fund). Of course I’m not saying they’re white supremacists or specifically support Trump’s white supremacy, but all we can go by is what they’ve publicly said and done, which is support Trump and been silent as he viciously attacks black athletes (and immigrants, and I could go on all day).

There’s another aspect of this that’s been little-discussed in New England. In 2016, the Patriots acquired tight end Martellus Bennett and defensive end Chris Long, who both went on to have strong seasons. Bennett and McCourty raised fists during the national anthem to show support for Black Lives Matter, and Long was one of the few white athletes to publicly express solidarity with the protests. When the Patriots visited the White House after the Super Bowl, Bennett and Long were among a group of Patriots to publicly skip the trip.

When Bennett and Long hit free agency in 2017, the Patriots let both leave.

Now, the Patriots are known for preferring to let veterans leave a year too early than hanging onto them a year too long. But both Bennett and Long were very productive, each signed extremely modest contracts elsewhere, and both were positions of need (the Patriots traded for a tight end and are now precariously thin at defensive end). It’s not some huge scandal, but in the context of the Patriots’ public love for Trump, it raises an eyebrow.

With the first baseball players joining Black Lives Matter protests, all eyes will be on sports fields today. Will any Patriots join McCourty in what’s now a protest not just against racist violence but against our racist president, and if so will they be risking their next contract? What about the Red Sox – will any take a knee?

Robert Kraft, the owner of the New England Patriots, who is a close friend of Mr. Trump’s and who has spent the night at the White House and ridden with him on Air Force One, issued a pointed statement on Sunday in which he said he was “deeply disappointed with the tone of the comments made by the president” at the rally, and defended players’ right to express themselves.

“Our players are intelligent, thoughtful, and care deeply about their community, and I support their right to peacefully effect social change and raise awareness in a manner they feel is most impactful,” Mr. Kraft said.

I uprated this post and totally agree it’s shameful that Kraft, Brady, and Coach Bill all backed this vulgar racist for the White House. That said-he did say something against what the President said and will not be coming down on his players. Not nearly enough resistance from a man who’s given Trump millions, but its more than nothing.

I think his statement is hot garbage. He calls out the tone of the statement and its divisiveness. THOSE AREN’T THE PROBLEMS WITH WHITE SUPREMACY!

The NFL has put together a spot. This is pretty good.

I would rather kneel with Colin Kaepernick

Than stand with Donald Trump

I’d love to know what it is that provokes so much support for Trump by arguably the trifecta of Patriots leadership (owner, head coach, star quarterback). After all, he was pretty awful during the campaign on this front too and as the diarist pointed out, this is supposedly liberal Massachusetts.

I also must confess that today I am glad I’m not a sports fan and will not be attending any games so I won’t be forced to make this choice. Sounds like there will be a lot of pressure to kneel during the anthem rather than the proper stand and salute pose, and I might even find that tempting myself just this once. However, the greater part of me strongly believes that the flag and country and the ideals it represents are much bigger than any President or current circumstances, and that by standing and saluting we do make a statement that we continue to aspire to the ideals which have been part of our nation’s DNA since 1776.

The third stanza of our anthem talks explicitly about slaughtering all the slaves who fought for the British to earn their freedom from American bondage:

And where is that band who so vauntingly swore,
That the havoc of war and the battle’s confusion
A home and a Country should leave us no more?
Their blood has wash’d out their foul footstep’s pollution.
No refuge could save the hireling and slave
From the terror of flight or the gloom of the grave,
And the star-spangled banner in triumph doth wave
O’er the land of the free and the home of the brave.

Ali boycotted draft induction on the basis that a nation that treated its people of color as second class citizens couldn’t compel those same people of color to kill other people of color overseas to preserve a neocolonial state. The 68′ Olympic athletes giving the black power salute adorns my classroom and is a reminder to my students that dissent is the truest form of patriotism. Kapernick took a knee at the behest of a veteran who said that was a more respectful form of protest. He gave up his career to protest police brutality that continues unabated, now without any oversight from Trumps Justice Department. Frankly on Tuesday when I go to Fenway I might protest the anthem, and my friend in the Navy Reserves might join me.

Which may be the reason you almost never hear or see in print the third stanza. In fact, time was if you knew anything beyond the first stanza you were suspected of being a spy on the theory that you were trying a bit too hard to be an American. People can do what they want, but I have a strong traditionalist streak when it comes to ritual.

So do I-went to a Rite I liturgy on Sunday. I also think that black Americans have a more complicated relationship to the flag and anthem than the rest of us, and I respect that too.

I am disappointed that my nation only seems to care about the outrageous behavior and attitudes of Donald Trump and his collaborators when that behavior and those attacks target our sacred altar — professional sports.

Today is Sunday. I just got back from church. I realized during this morning’s service that, for the first time in decades, I am terrified by what might happen at any moment. We have an unstable senile dotard in charge of the most powerful arsenal in human history, and nobody knows how little or much it takes for that thug to push the button.

Of all the many reasons to be disgusted by Mr. Trump, his attacks on professional sports are at the very bottom of my list.

He’s been attacking his critics and free speech for as long as he’s been in the public eye.

What’s different this time is his use of professional sports as a vehicle.

Fair enough. To me the important thing is that people have noticed.

He deserves opposition at every level, but I agree that the focus on this compared to his threat of war against North Korea last night is not good. I don’t think they are smart enough to act like this but I hope this is not a ploy to divert attention and give some more cover to the GOP on the health care bill.

Well, I’ve seen comments today to the effect of being glad he’s getting into this with athletes rather than a country with bombs.

If there was ever any proof that this man cares for no one but himself, he argued that the new rules in football that serve to protect the health and life of the players be eliminated, for his personal amusement.

I think the broader issue is that Kapernick was blacklisted in 2017 for opposing white supremacy and supporting black lives. It’s ironic that most of the NFL followed his lead today with the blessing of most owners and the Commissioner-so if Trump wanted to silence people he backfired badly.

That said, the NFL should give Kapernick a fair shot to play. Calling these players bitches that deserve to be fired is as close to calling them the n word as this President has gotten. And it’s the same damn thing. Nazis deserve a fair shot at having their speech heard, blacks should shut up and play for their white owners.

*to clarify the last sentence is what I think the President really means.

The headline for this post is either misleading or inaccurate.

Kraft issued a statement, and he signed it personally, rather than have it come from the team organization. I couldn’t care less about Kraft, and I dislike his politics.

But shouldn’t the headline reflect the facts?

Just wanted to say for the record I did not change this headline, wasn’t asked to, and don’t know who did,. Boo, editors.

I’m always happy to update headlines based on incorrect facts or a changing situation, but Kraft was silent for 36 hours & only issued a statement well after it was clear the political winds had shifted. His 36 hours of silence remains a fact.

Charley on the MTA
Admin
Famed Member
Reply to  thegreenmiles

That was me, Miles. Sorry, had to fix it. Your words speak for themselves, but the headline was no longer strictly accurate.

To all, I should have made that clear that it was me who did it.

Shannon Sharpe really nailed it on this point. The owners only cared after this started to impact their businesses and became a PR problem.

This piece is a must-hear and must-see. Thank you for posting a link to it.

This is, of course, confirmation bias on my part because I have exactly the same reaction of Mr. Sharpe.

The racism of the NFL, its owners, Mr. Trump, and entirely too much of America is the story here. It continues and grows.

We MUST not ignore the racism that is destroying us.

Wow, does your piece need to be said. Thank you Cassandra. Seriously, thank you.