On April 16, 1945, Jackie Robinson was among three Negro League stars who “tried out” for the Red Sox at Fenway Park. We don’t know for sure if it was Tom Yawkey, or someone else in the front office, or anyone at all yelled the disgusting words, “Get the niggers off the field!” Regardless of the words, the indisputable fact was there was no place for Jackie Robinson, Sam Jethroe, or Marvin Williams in the Red Sox clubhouse. There was no place for these three Negro League stars, or any black player, on the Red Sox roster until Pumpsie Green integrated the team 14 years later.

This is a disgraceful history, and Red Sox owners must be commended for seeking to purge their street address of the Yawkey name. The City of Boston, which has jurisdiction over street names, should embrace this call, and dispatch a public works crew with a new set of street signs for the former Jersey Street.

The only thing holding this effort back is the question of a new name. Some folks have suggested naming the street for David Ortiz, but that’s been done and I think the street name needs to go beyond the joys of a World Series win with a diverse team of local heroes. The new name for this stretch of Jersey Street should go back to 1945, go back to an obvious and hateful wrong, and symbolically make a small, belated attempt at acknowledging the mistakes of the past. 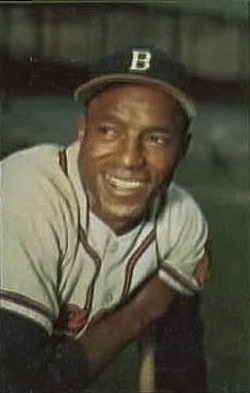 Sam Jethroe is a part of Boston history. Our pioneer of major league integration, who went on to fight the injustice of Major League Baseball’s denial of pensions to players who lost part of their playing careers due to bigotry and discrimination.

For those who object to removing the Yawkey name on Jersey Street because the Yawkey family were charitable benefactors in the city, let those contributions reflect the name of the contributor. Let’s not honor the bigotry that prevented championship banners from being hung at Fenway Park.

This is a great post Pablo. Also an interesting current events article for my students!

My understanding is that Yawkey was one of the most significant contributors to building up the team with a long tenure of leadership. Honoring someone for their contributions does not imply endorsement of every single thing he did, said, or thought and “but he was racist” isn’t enough for me, especially once you go back a certain length of time. I am SO opposed to this latest trend of disparaging every person whose values don’t match those of the early 21st century.

Building up the team?

Let’s look at the track record. Yawkey inherited $40 million in 1933, and turned around and bought the Red Sox for $1.5 million. He owned the team until his death in 1976.

What did he build?

Under the current ownership, the Red Sox won 3 World Series in the past 16 years, the only World Series wins after 1918.

E Pluribus Unum. Our strength is our diversity. Yawkey erected a barrier to extraordinary players because of his bigotry, which resulted in a non-competitive team. Not something we should be honoring with a public street.

The simple fact of 43 years ought to count for something, the longest tenure in MLB history. He did in fact make great strides to build up the team after the worst record ever, losing 111 games in 1932. Red Sox integration may have been a bit late for baseball, but it was still before much of what we call the Civil Rights Era. Just because he was elected to the Baseball Hall of Fame in 1980 doesn’t make him automatically a candidate for any Civil Rights Hall of Fame.

If you can buy a baseball team with a fraction of your inheritance, and you keep the team for the rest of your life, is that an achievement worth an honor?

We can’t rewrite our history, but we can choose what we honor. My values say that Sam Jethroe is much more deserving of the honor, and should be remembered for his achievements.

To those that say his wife and family were charitable, I would remind them that there is also the Yawkey Center at MGH which is totally an appropriate name that should stay. This is named after his wife and honors the family for their achievements in funding cancer research.

I think the street name right outside of Fenway honors their contributions to baseball, and when it comes to breaking the color barrier they were the last to do it.

Our own region has a fraught history with race and it is time we come to grips with that. I’m inspired by my friends who renamed their elementary school in Cambridge after Maria Baldwin-our first African American principal rather than the eugenicist it had been named for previously. Another Bostonian who has a lot of other things already named for him.

Public places should honor public contributions. Let the city of Boston decide-but Pablo’s ideas are a good one.

So there’s an interesting litmus test we can start using-one I might write my own post on. Developed by John Piper of all people (an evangelical Calvinist preacher in the Southern Baptist tradition), examining Confederate monuments.

So in the case of someone like Nathan Bedford Forrest, it’s obvious he is being memorialized for his lifelong devotion to white supremacy and treason. He continued fighting the Civil War via a domestic terrorism campaign long after it ended. It’s a reality not worthy of public praise and he is entirely tarnished by that evil.

Here we have someone admittedly nowhere near that level of unambiguous evil. Someone who owned a baseball team, rather than command an army. Someone who gave to charity that helped all races. And someone who contributed to the civic life of the city.

But the reality is he also was an unrepentant racist and possible anti-Semite. Someone who in not hiring black players denied equality of opportunity to many, tarnished the name of our city and team with MLB players of color to this day, and contributed to a culture where black players still get called the n word at our ballpark today. I think 1 and 2 are pretty clearly met. 3 is more ambiguous which is why MGH and other area charity institutions can keep the name in my opinion. Honor the family, including its generous patriarch, while stripping him of a civic marker due to his specific policies which hurt our city and team.

This is a Boston street, and I suggest we therefore apply a Boston solution.

Those of us who were were born here know that Yawkey was a flagrant racist who used the Red Sox to sanitize his visage. Let’s NOT use his name on any street, a horrid genuflection to his impact on the game, but leave his name on MGH and the Jimmy Fund where his family had a positive impact.

TBD, I totally agree with your sentiments. I’m certainly no fan of Mr. Yawkey.

On the other hand, the relevant portion of Jersey Street has been called “Yawkey Way” since 1977 — forty long years. For two generations of residents, it’s been “Yawkey Way” their entire lives.

The effect of my proposal is to further restrict this shameful name to just one block of Jersey Street. We can perhaps fight that fight another day.

As a kid and loyal Braves’ fan, i remember well Sam Jethroe playing centerfield. I also remember the beginnings of the Jimmy Fund begun by the Braves on the old radio program, i think it was “truth or consequences: with MC Ralph Edwards. To his everlasting credit it was Ted Williams who motivated the Red Sox to assume the Jimmy Fund a few years later when the Braves left Boston for Milwaukee. I would love to see Sam Jethroe recognized properly!

How about Larry Whiteside Way? He broke the color line at the Globe sports department. That was years after the Red Sox integrated.
No objection to Sam Jethro, but I think we shouldn’t pretend that racism in Boston died with Yawkey.

On April 16, 1945, Jackie Robinson was among three Negro League stars who “tried out” for the Red Sox at Fenway Park. We don’t know for sure if it was Tom Yawkey, or someone else in the front office, or anyone at all yelled the disgusting words[…]

Disgusting, yes. Shocking to anyone at the time…? Likely not.

A little perspective: Jackie Robinson himself didn’t start in the Major Leagues until 1947 and the US military wasn’t integrated until 1948.

It’s one thing to point out that the Red Sox ownership was that last racist holdout in the MLB, and that’s true. It’s quite another to use 1945, when segregation was legal in many parts of the country, and de facto almost everywhere else, and comprehensively accepted as ‘the norm’ in Boston to point fingers at Yawkey and single him out when he wasn’t, at that time, a particular standout. There was no specific color law in the Majors, but a long succession of white owners and managers maintained it for many years because that’s what they believed was ‘the right thing,’ and few disagreed with them at that time.

It’s also worth noting that Bill Russell, when he played for the Boston Celtics in the 1960’s suffered a heap of racist abuse from the Boston fans… And that this is after Pumpsie Green integrated the Red Sox and that the Boston Schools had to be forcibly de-segregated in the 1970’s which caused some people to riot. So maybe Yawkey simply knew knew the fans were and gave them what they wanted??? I don’t know.

I do know that removing his name from the street and replacing it with another, while likely necessary, is not sufficient. That he was one of the last holdouts of a system of segregation that most white people bought into for a time, doesn’t make him any worse than any of those others… Yeah, he shouldn’t be memorialized for it, but neither should he shoulder the entirety of the blame for it… and in shouldering that blame, take the focus off the history

Thank you to the Merrimack Valley Chamber of Commerce for hosting another fantastic spring expo, this year including Hispanic & Multicultural and Economic Development Forums that brought together entrepreneurs from across the region. #mapoli

I've been talking about matters contributing to this for months! Needless to say—I was neither surprised by #MassBlackKilling nor lamestream press coverage. I took a mental layoff. But I'm Black TOMORROW when we'll—UNPACK why it happened & it will only intensify! #BOSpoli #MApoli

You guys sure you wanna trade GOD FOR JOE BIDEN, KAMALA HARRIS, AND THE DEMOCRAT PARTY?

THAT’S LIKE TRADING LUKA AND JASON TATUM FOR DINO RADJA! 🤔

Some women on the political right believe we are feuding. So, they watch what I say & do to see if there is anything they can point to as a swipe against them. I am not oblique. I am blunt. They are not interesting. They are colorless.
Self-absorption is a real thing. 🤨#mapoli

#Schoolmealsforall has enabled us to serve fresh, local produce to ALL of our students.
Let's take this off families 'plates'.
Universal meals increases the community feel of the lunch room, free of judgement and shame. #FeedKidsMA #mapoli

#SchoolMealsforAll has benefits that extend far beyond the lunch table. Research shows when a child is well-fed, their mental & physical well-being improves. Additionally, by making meal access universal, we create a more equitable and just educational environment. #FeedKidsMA https://twitter.com/McGovernMA/status/1526198193565868034