Cross-posting this from UCS’ blog the Equation. The need for new funding sources for clean transportation of course became all the more acute with today’s decision by the SJC rejecting the millionaire’s tax.

The Massachusetts Senate has unanimously passed an energy bill that promises to dramatically reshape the vehicles and fuels that power our transportation system.

If enacted, this legislation would make Massachusetts a national and even global leader in the deployment of electric vehicle technology. It would dramatically reduce our consumption of oil, and the pollution that comes from petroleum. It would save lives by significantly improving air quality, especially in urban areas. It would produce a stronger and more resilient modern grid that will provide ratepayers with greater efficiency and reliability. And it would produce long-term cost savings for Massachusetts drivers and transit agencies.

Let me start with a little background on transportation and Massachusetts climate policy.

Under Massachusetts climate law (the Global Warming Solutions Act or “GWSA”), the state is required to achieve significant reductions in economy-wide global warming emissions. When it comes to emissions from electricity, we’re making remarkable progress: over the past decade Massachusetts has cut our emissions from electricity impressively, thanks in part to a strong set of policies, including our investments in energy efficiency and our participation in the Regional Greenhouse Gas Initiative (or “RGGI”).

But when it comes to transportation, things have been more difficult. Improving vehicle efficiency standards have helped reduce emissions some since 2008, but the gains in efficiency have been partially offset by increases in total driving and increasing purchases of SUVs and light trucks. Electric vehicles are a technology with extraordinary promise but still represent only about 2 percent of new vehicle sales. The state has committed to putting 300,000 electric vehicles on the road by 2025, but we have a ways to go to achieve that goal. 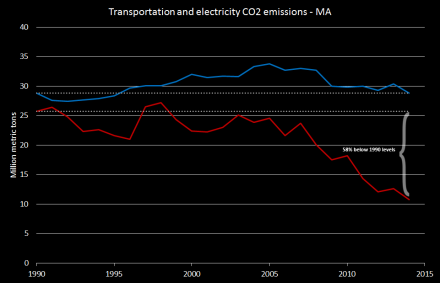 Overall, transportation emissions are about the same as they were in 1990, and transportation now represents the largest source of pollution in Massachusetts, including over 40% of global warming emissions.

What would this bill do?

The Senate bill would accelerate the rapid electrification of our transportation system, while taking steps to ensure that all residents of Massachusetts benefit from electric vehicle technology.

To start with, the Senate bill envisions the end of diesel fuel in our public transportation system. Heavy duty diesel engines are some of the dirtiest vehicles on the road, contributing significantly to urban air pollution that causes asthma and other respiratory problems. Existing technologies such as electric buses have zero tail pipe emissions and can reduce global warming emissions from diesel equivalents nearly 80 percent on today’s grid. The bill would require the Department of Transportation to replace all diesel engines with zero-emission vehicles in its bus, commuter rail, and marine fleet. This would build on recent announcements in California and New York City to electrify their vehicle fleets.

The bill would also require the Department of Transportation to enact policies that would ensure that 25% of all vehicles on the road are electric by 2026. This would represent a major increase from current levels, as electric vehicles are currently about 2 percent of new vehicles sold in Massachusetts. Achieving sales at those rates will require policies that are strong enough to make electric vehicles affordable for low- and moderate-income residents, in addition to building the infrastructure necessary to keep EVs charged.

The critical role of market-based programs

The Senate bill not only sets out big goals, it also identifies a way to pay for the investments that we need in clean transportation: by requiring the state to establish a market-based program to reduce emissions from transportation fuels (as well as heating fuels).

Under RGGI, Massachusetts and the other states of the Northeast have placed a limit on emissions from power plants. This limit is enforced by a requirement that power plant operators purchase allowances that are sold in regional auctions. By limiting the number of allowances available, RGGI ensures overall emission reductions. Meanwhile, the sale of allowances raises money that is invested in efficiency and renewable energy.

This “cap and invest” model has proven effective in reducing emissions from electricity—and beyond. While RGGI only applies to electricity, other jurisdictions, including California, Ontario and Quebec, have expanded this model into heating and transportation fuels and the result has been billions in new investments in clean transportation. California alone is projected to spend over $2 billion on clean transportation investments this year – money that is going to expanded electric vehicle incentives, electric buses, improved transit services, and more affordable housing near transit.

If Massachusetts adopted a program similar to the California-Ontario-Quebec model, it could raise over $450 million per year in investments in clean transportation. That would be enough to not only make a major new investment in electric vehicles, but also to address critical issues facing our Commonwealth such as public transportation and affordable housing.

With the Senate promising bold action to accelerate the electrification of transportation, the action now turns towards the House of Representatives. The House has shown interest in promoting electric vehicles this session, including a good bill from Rep. Tom Golden, chair of the energy committee, that would encourage car dealers to sell electric vehicles.

One big question is whether legislators in both chambers agree on a sustainable and dedicated source of funding for investments in clean transportation. Too often, the policies we use to promote electric vehicles are based on one-time infusions of funds, such as the $12 million that Gov. Charlie Baker committed to the state’s main electric vehicle incentive in December 2016. The problem with one-time cash infusions is that they expire: the state is now running out of funds and may have to cut back on their rebate program.

The senate’s proposals in that regard—and the many other good transportation provisions in last night’s bill—are welcome indeed.

This article starts off talking about congestion. EVs will NOT solve congestion

Electrifying commuter rail and bus networks is the cleanest, greenest, most efficient way to ease congestion. Make it affordable and frequent

I am really excited to have earned the endorsement of my friend and former City Councillor Nadeem Mazen! I have learned so much from @nadeemtron's experiences in public life, and I am thrilled to have his support in this endeavor.

👁‍🗨Wake UP WOKE
On MONDAY—hear what
THIS very important LADY
has to say about FUTURE
BOSTON in an EXCLUSIVE
Urban Conversation
with @NotoriousVOG
starting at 8:30AM!