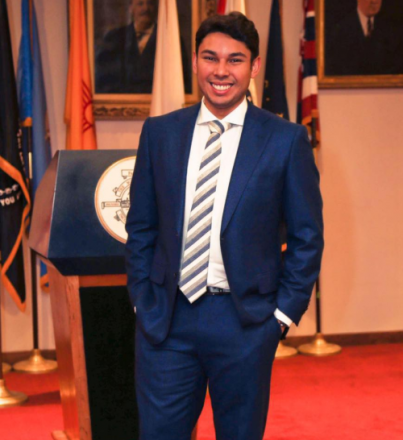 Jasiel Correia was 23 when Fall River voters elected him mayor over  incumbent Sam Sutter, rejecting an experienced, proven steady hand to stick a thumb in the establishment’s eye by electing someone who’d never won an election before and had little relevant experience. Stop me if any of that sounds familiar.

Three years later, their faith is not exactly being rewarded:

Fall River Mayor Jasiel Correia has been arrested and charged with defrauding investors, according to the U.S. Attorney’s Office in Boston.

In a tweet this morning, the U.S. Attorney for Massachusetts said Correia was “arrested and charged with defrauding investors” and “using funds to pay for a lavish lifestyle and political campaign.”

In September 2017, after months of public denial, Correia confirmed he was the subject of an FBI and HUD investigation and that a grand jury had been convened regarding his start-up app company SnoOwl.

The Fall River Herald News has more background on the investigation.

I wrote here at BMG in 2015, “Considering how many good things are happening in Fall River right now – an Amazon distribution center bringing 1,000 jobs to the city, plans to revamp the New Harbour Mall, and a dazzling opening-up of the riverfront as part of Route 79 reconstruction – voters are taking a huge gamble by dumping a steady steward for an up-and-comer.”

Correia’s last Democratic challenger ran as a fiscally-conservative moderate who cited closing the municipal airport as a big mistake. If you’re trying to prove you’re not the candidate of the moneyed establishment, making private planes your big issue is probably not smart. I am not a Fall River politics expert, but how about fighting for state money to build new schools, improve transit, and green the city?

Democrats have to stop telling voters they have to choose between the sensible candidate and the candidate of the people. Be both!

📨 No. 1 is from Pilar to @SenMarkey, @RepRichardNeal and @SenWarren #MA01 #MApoli #MApols

And in Massachusetts, there is always this. Shame on @MassGovernor for not doing what is right for immigrants, just like everyone else had to when they migrated to the US. #immigration @IEquality @maddow @thenetworklared #mapoli #bospoli

NEW: Less than 24 hrs after its passage, @CharlieBakerMA vetoed a bill allowing ppl w/o legal immigration status to obtain a driver’s license, arguing a standard license “will no longer confirm that a person is who they say they are.” Legislature has enough votes to override

Girlie so groovy, I want you to know@ParkerHereford·
43m

For the 2022 #mapoli election, I am blanking the ballot (as a form of peaceful protest).

I am not even bothering to write in Azealia Banks, Minnie Mouse or anyone. Y'all ain't getting nothing from me except A BLANK BALLOT THAT *STILL* HAS TO BE COUNTED

80% chance of rain? Team Roberto is out here knocking rain or shine! #mapoli

Join us by signing up at https://electRoberto.org/events

📨 No. 13 is from @aschwortz to @SenMarkey, @massgovernor, @SenWarren and 3 more #MApoli #MApols