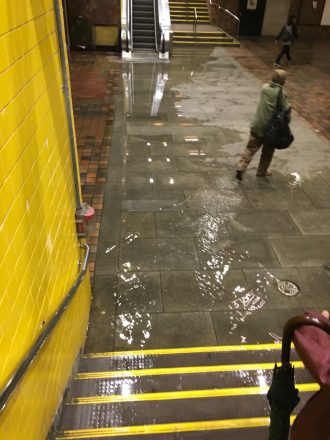 Monday at Alewife: The MBTA is literally taking on water.

Big new MassInc Polling Group poll reflects back what we experience in our daily lives: Traffic is lousy; and the T is late.

Two-thirds of voters (67%) report leaving earlier or later to avoid traveling during the worst traffic; nearly as many (63%) say they have felt stressed, angry or frustrated. Full-time employees are feeling the effects even more acutely, with 72% reporting emotional impacts and about half (52%) saying they have been late to work in the past few months (See chart). Among full-time employees who commute on public transportation, impacts are still more severe—63% report having been late for work, and 53% say they’ve been late for appointments in the recent past.

Funny how this works: If you neglect public transit for more than a decade, the entire transportation system breaks down and people get stressed out. Also too, more pollution. (Who thought this was a good idea?)

And here we go with the polling numbers for possible solutions to this problem. They’re eye-popping! Consensus exists, folks!

Voters, for their part, appear to be ready for change, with 66% agreeing that “action is urgently needed to improve the state’s transportation system,” compared to 21% who say the system is working pretty well as is. That action extends to raising new money to invest in the transportation system, which is supported by 80% of voters.

I don’t want to just cut and paste the whole thing (read it yourself), but also note that the following things all enjoy solid- to overwhelming popularity:

Or maybe the House — chockfull of press-release progressives — will find some reason not to do anything, as it usually does. I don’t prefer being cynical, but they so rarely fail to disappoint.

Or maybe the House — chockfull of press-release progressives

You win all there is to win in Massachusetts today for your pithy and straightforward description of certain members of the Lege….

Charley on the MTA
Author
Noble Member
Reply to  petr

Heh. I may recycle that one.

If only we could transfer the stress.

Let’s say we had truly pro-labor Democrats in control of the state government instead of the press-release progressives (love that, and stealing it) that we have today.

I’m certain there is a way that we could transfer the stress of the cost in time and money of our transportation systems to the wealthy class (the big dollar donors to both parties).

For example, we could legislate payment for travel time, to and from work to home. I’m not sure of all the details, but clearly we could accomplish this with the ubiquitous smart phones and GPS tracking already in use. In short, an employee’s pay would start the moment they left their driveway/apartment, and ended when they returned.

Stuck in traffic? No worries, at least for the service writer on her way to the car dealership where she works. Green Line running slow? That’s going to get under the skin of the hospital administrator, but the nurse coming in from Newton to work at Brigham and Womens can relax and get there when he gets there.

This would also get the attention of the wealthy class to do something about affordable housing, since they would have a direct incentive to want their labor force to live closer to their homes and businesses

I’m asking our allies in the Legislature: what risks are you willing to take to advance these bills to hold police accountable?

Right now, elected officials of color from across Massachusetts are at the State House to share our grief and anger at the recent killings of George Floyd, Ahmaud Arbery, and Breonna Taylor. And to demand systemic change.

You can stream it here: https://www.facebook.com/MABlackLatinoCaucus/live/

As someone who spent years in predominately white spaces in Boston...like the MA Statehouse, I can tell you without hesitation that, yes, Boston's liberal reputation is still a mirage. https://twitter.com/allyjarmanning/status/1267832372013268996

Boston -- please read this incredible essay from @bonitafrobum. Boston is not immune from racial violence and police brutality, she writes. "Perhaps this city is just better at maintaining that illusion." https://wbur.fm/2zWQjye