As draconian abortion bans have moved through legislatures in Alabama, Georgia, Missouri and Ohio in recent weeks, I’ve seen countless social media posts over the last few days urging women to rally and men to get off the bench.

The problem with this strategy is that women are no more likely to support women’s right to choose than men.

This is just one poll but you’ll find similar results across countless other polls. The divide on a woman’s right to choose isn’t down gender lines. Men and women almost always poll within a few points of each other: 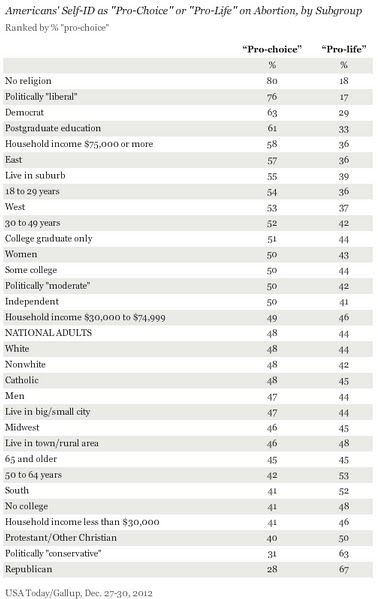 The non-religious, progressives, and Democrats – these are your allies in support of a woman’s right to control her body, her health, and her reproductive choices.

Republicans, conservatives, and evangelical Christians are the most anti-abortion, the biggest enemies of women’s rights.

Obviously banning women’s health services harms women more than it harms men. And you can make a very good case that the lack of a clear gender divide in these polls reflects patriarchal politics and a society that often imposes male-oriented views on women. (I once attended an evangelical Christian wedding where the vows included “the wife submits to husband as both submit to God.” They’ve since divorced.)

But – looking at American voters as they are right now – if you’re looking to win the fight for a woman’s right to choose, your political strategy should not assume women are your allies and men are your enemies.

Indeed. I suggest that the underlying issue that we really MUST confront is “Religious tolerance”:

1. Are there limits to what we tolerate in the name of religion? If so, what are they?
2. Are we required to “respect” those whose beliefs cross that line? If so, what does that “respect” mean?
3. Is our current attempt to separate belief from practice practical? If not, why do we maintain it?

Most of Americans agree that sacrifice — both animal and human — is across the line of the first item. Similarly, most Americans reject female circumcision. Those are the easy ones. Slightly harder is the use of mind-altering substances in connection with worship. Children are served alcohol in every Episcopal Mass that I’ve ever attended. Why isn’t that a violation of Massachusetts liquor laws?

The beliefs that underlie these draconian limits on women’s sexuality are, to at least some of us, abhorrent. How do we reconcile our revulsion with our professed desire for religious tolerance?

The others are similar. Abortion is just the current wedge — this is cultural war, and it goes far beyond “just” abortion.

My tolerance of the religion practiced by red-state Evangelicals and “Christians” is tattered at best.

Where and when is it appropriate for us to say “enough is enough”?

The amount of alcohol in a communion cup isn’t worth enforcing against and might run into free exercise concerns.

I’m fully aware of the way alcohol used in communion rites is excused. I note that the Southern Baptists and some other protestant traditions use grape juice instead of wine. This is in part because those traditions strictly prohibit ANY alcohol consumption, and also in recognition that even tiny amounts of alcohol are an issue for certain segments of the population.

Meanwhile, various traditions have used peyote, marijuana, and a variety of hallucinogenic mushrooms in religious rites. Many of those are much older than Christianity. We extend no “free exercise” exceptions to them.

I just think that we need to collectively examine the limits of our “free exercise” concerns.

I don’t think the point is that gender support is different. I think the idea is to encourage men who are pro-choice to speak up more.

It’s one thing to say “the idea is to encourage men who are pro-choice to speak up more.” but it sort of contradicts the times I see women post “if you don;t have a vagina, you have no right to speak your opinion on abortion”….or other such phrases.

I generally roll my eyes at such hyperbole.

I think there is a variant, attributed to Gloria Steinem that is more apt:

If men could get pregnant, then abortion would be a sacrament.

These polls also show stronger pro-choice majorities for voters between 18-29 and 30-54. Very strong majorities for abortion rights correlated to education levels. A slight majority of Catholics are pro-choice overall. I bet if we separated Protestants between mainline and evangelical the numbers would be different. My in laws are Methodist pastors and spent the weekend outraged at the Alabama law and their own churches reluctance to extend full sacramental rights to LGBT members.

So I think like anything else in public life, religiosity is a predictor that can only go so far. The radicalism of the right has made me more comfortable owning my faith and trying to reclaim it for the sensible moral center on these questions. I give credit to Biden, Buttigieg, Booker, and especially Liz Warren for grounding their progressive politics-especially on choice- within the frameworks of their faith traditions.

I agree with all of this. I think some clarification is still required.

In the deep south — the Bible belt — the “main line” IS evangelical. These are areas that still reject Darwin’s theory, still proclaim the Young Earth thesis, and assert the literal inerrancy of the King James Bible. If your in-laws are from that region, then they are outliers there.

I also think we really need to know and take to heart the lessons of history, especially religious history, in these matters. Specifically, I think the major learning from the failed attempt of the Episcopal church to accommodate its homophobic and misogynist “conservative” rebellion is that these bigots who use religion to justify their bigotry are best given an early and clear boot out the door. Many of the Protestant churches of the Civil War era broke over disputes about worshiping with Blacks. The Episcopal Church did not. It would have been better if it had. The institution wasted more than a decade getting to the right answer about gender and gender preference, and it NEVER got to the right answer about slavery.

Finally, my rub with applauding those we agree with for grounding their progressive politics within the framework of their faith tradition is that we then also legitimize the similar grounding in faith of those whose politics we abhor.

At least some of the bigots and misogynists who are doing so much damage to America today truly and sincerely believe they are doing God’s will. As much as I despise him, I see no evidence of insincerity in Mike Pence.

I am unwilling to recognize his toxic beliefs as anything except toxic beliefs. The fact that those beliefs are grounded within the framework of his faith tradition is exhibit A in my case against this meme.

Just to be clear “Mainline Protestant” has a historically specific meaning, which doesn’t necessarily make them the majority in all areas.

Fair enough. I’m just saying that we in New England tend to forget that what we view as “normal” and “mainstream” are a minority in the Bible belt.

Oh I meant mainstream here to mean centrist or mainline. It is unfortunate that the UMC will likely split (maybe as soon as the next month or so) as the TEC did. In many ways they already feel like different churches though. The Southern Il and Northern IL UMCs are very different already,

I guess being anti-choice is ‘centrist’ or ‘mainstream’ for Alabama, but even this draconian ban polls badly with a broad majority of their electorate. It might even help keep Doug Jones in the Senate, a small silver lining.