Honestly, why should anyone outside of the Fore River Basin care about the compressor getting built?

You might live 15, 25, 35 miles away from it and you’d never know the compressor existed. You’d never have to drive over the Fore River Bridge every day with the compressor stack blowing methane in your face as you drive. You won’t have to walk your dog in your usual park mere feet away from 24/7 noise and the gas odorant mercaptan stinking up the area.

What happens, though, if one day, some big, for-profit corporation wanted to build dangerous infrastructure in your neighborhood?

Wouldn’t you think that existing state laws, regulations, and common sense would surely prevent such a thing from being built? I mean, why would the state have all of these environmental agencies and permit processes if they weren’t going to stringently review projects for safety and impact?

Here are some good reasons why you should care—even a little bit—about the Weymouth compressor project getting built. If it happens in Weymouth, it will happen to you.

What About State Land Protection?

How certain are you that the treasured conservation land or park in your neighborhood is truly protected by law? What if the laws protecting the land, and access to it, meant nothing?

There is a park within feet of the proposed compressor site that is supposed to be conservation land with full access guaranteed for everyone. If you don’t have to worry about conservation land protection, you might live in Swampscott. 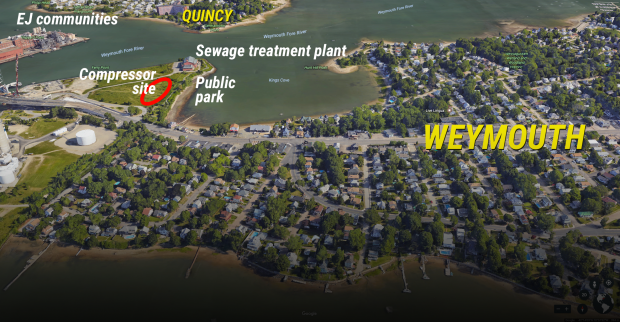 If built, the noise and pollution from the gas transmission compressor would make any use of Kings Cove Park impossible. Gov. Baker’s administration has shown no concern regarding this issue. Our neighbors to the west know the deal: it happened to them and it will happen to us.

Cross “protected conservation land” off your list of defenses against the dangerous infrastructure.

What About Political Pressure?

If you were lucky enough to have the full support of your Mayor, Town Council or Select Board, you’d already have a leg up in the fight against the dangerous infrastructure. This kind of support would go a long way in the fight, especially if your community gets no help from the Governor. What if town and city-level support wasn’t enough to stop the project, though? What if you had to run your fight up the political food chain to gather additional support against the project?

Say you had the good fortune to garner the support of your State Reps and Senators—all of them, from both parties. What if the electeds tried (individually and as a group), year after year, to enact protections against future infrastructure, wrote letter after letter to State and Federal agencies in well-reasoned protest of the infrastructure project? What if that wasn’t enough?

What if you decided to run your community’s fight as far up the political flagpole you could go, to your Federal Senators and Congressman, who tried to intervene at the Federal level? Surely such massive censure would work some magic on the private company and/or the dangerous infrastructure-friendly Governor, right? Hmmm.

What if, in addition to going politically vertical, your community went politically lateral? You would have the might of, and hopefully money from, your surrounding towns and cities, as well as their Mayors and Select Board members to contribute to the fight. How supported you would feel! Surely the private company that wants to build the dangerous infrastructure and the Governor would walk it all back, hands in the air palms out?

Cross “protected conservation land” and “political pressure” off your list of defenses against the dangerous infrastructure.

What About State Process?

What if you had a real environmental case against that aforementioned dangerous infrastructure, and there were existing laws that would prohibit it from being built? Score! Would you expect to have a non-biased and transparent permit review process with the Department of Environmental Protection (DEP) whose mission statement reads:

MassDEP ensures clean air, land and water. We oversee the safe management and recycling of solid and hazardous wastes. We ensure the timely cleanup of hazardous waste sites and spills. And we work to preserve the state’s wetlands and coastal resources.

Would you expect that all data and testimony during the permit review process, and your inevitable rehearing would be given equal weight? You might be surprised to hear that due process is not required to render a regulatory hearing decision involving public health in the Commonwealth of Massachusetts. Just ask us here in Weymouth.

SIDEBAR: Would you expect DEP to give more weight to a paid witness for the applicant who has previously testified under oath in another case that mesothelioma is caused by smoking and not asbestos exposure, or a pediatrician? I will let you guess which testimony got more weight and which was thrown out. I mean, what the hell do pediatricians know, anyway? Doctors need to stay in their lanes, pllllt. 🙄

As we have seen with the compressor air permit process, MassDEP clearly displayed their capacity and willingness to lie for a private, for-profit corporation, as well as collaborate with the very industries they are supposed to regulate.

What would you do if you knew you had no recourse regarding the dangerous infrastructure that would render your neighborhood worthless? What if there was already a huge mount of disease that could be linked to existing pollution in your area, and it mattered not at all?

Cross “protected conservation land”, “political pressure”, “expectation of due process” and “upholding of laws and regulations” off your list of defenses against the Dangerous infrastructure.

HANDY TIP: your community and your town/city also better have a big stash of money to fight the state.

Every single step of the ridiculous compressor review process has been under Governor Baker’s purview. At almost every stage of review there has been a complete disregard for the valid and fact-based concerns of the residents and a cruel lack of concern for the myriad other problems with the project. Even when kicked the issues up to the head (at the time) of Energy and Environmental Affairs for full review, we got nothing.

State laws have been broken and/or ignored, ethics have been breached, air test results paid for with tax dollars were hidden from the public, members of DEP lied under oath at the air plan permit hearings under “pain of perjury”. All of these infractions have gone unpunished and unacknowledged by the Baker administration. The Baker administration itself has suffered a total of zero hits from this debacle.

So, what do we have now?

We’ve got four more years of Governor Baker, y’all. 🎉 And he doesn’t care about citizen/elected resistance.

If your community faces a dangerous infrastructure project, you will be shite out of luck for the next 3.5 years. The project you fight may not be a gas-related project. It may be something else you care very much about keeping away from your family and friends. I wish you well in your fight, because Governor Baker has made it very easy for corporations to do whatever they want in Massachusetts, and he gives not one f*ck about your health. 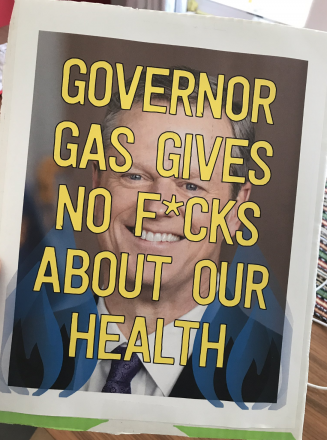 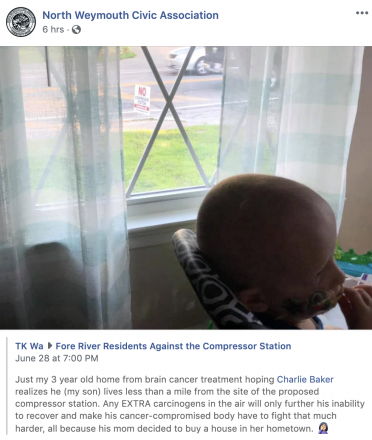 Does this kind of negligent BS ring a bell with you? It should.

Gov. Snyder just got run out of town on a rail (whether he will admit it, or not) because of his involvement in the poisoning of Flint, MI’s water. Funny thing, two of the (now) prominent pediatricians—Dr. Landrigan and Dr. Hanna-Attisha—involved in the discovery of the lead poisoning and its aftermath have turned their attention to the Weymouth compressor issue, calling it “Flint on the Fore River.” Dr. Hanna-Attisha even mentioned Weymouth in a commencement speech at  BU School of Public Health on Saturday, May 18, 2019

These public health issues are huge and global, but they are also right outside our front door if we choose to see them. Even here in Boston, today, a large toxin-emitting and explosion-prone gas compressor station is being proposed in North Weymouth — just 9 miles away from here — it’s another example of an economic, racial, and environmental injustice that will impact our health.

One last thought: I hope you’re good at fundraising.

You and your community will suffer so many injustices (and more) and you will pay for the experience of watching your neighborhood and homes become worthless using your own tax dollars. Your money will be spent to kill you slowly, with full complicity from the Baker administration. As Baker would say: See you in court.

Supplemental linkage:
• We Need Some Milk Podcast had me on a couple of months ago, and it got truth-heavy.
• Doing my part, day after day. See you around 1:15pm? #SitWithAndrea

This was great content and I love the formatting of the piece. What can folks who don’t live in the area do in solidarity with the folks that do?

Thank you! SO much!

The fight needs money for lawyer fees, honestly. Citizens have spent so much money and will need to spend more. The town of Weymouth has already spent about 1.5 million dollars fighting this

The city of Quincy has been helping by giving money to help the citizen group (FRRACS) pay for fees to fight the state. Citizens of Hingham have given $18k to FRRACS. As you can see, Gov Baker is going to make us go to court, and that will cost more money.

FRRACS’ lawyer, Mike Hayden and his family, live in Quincy (Germantown) and would be greatly affected by the compressor being built. He is worth all of the money we can give him and the generous firm he works for:
https://www.nocompressor.com/donate

Yesterday, I asked @JimLyonsMA why he condoned vulgarity. He did not appreciate the question and refused to talk to me. So, minutes later, I shared my thoughts about Jim with his wife, Bernadette.

“Your husband is a clown.”
#mapoli #bospoli

“I do not like reality. It is big, mean, and scary. So, I spend my time making up absurd narratives to whitewash trash.” #mapoli

@LocalPoliticsis @RaylaForMA @massgop Rayla is a Superstar and will be an awesome Secretary of State!

.@RaylaForMA lied about #Mission5000. She paid to get on the ballot. Also, at the end of the month of April, she only had $633.63. She brags about her thousands of followers. Why could they not help her get on the ballot? Why can they not, at least, each chip in $1.00? #mapoli

All Politics is Local with Jon Fetherston@LocalPoliticsis

At the convention, I saw the @MassGOP of 2022. Around 50% of delegates didn't show up. It is a micro to the macro issue of @JimLyonsMA. Since being Chairman all I see are Ls. We have less Republicans now than when the party started. More dems in TX than Reps here. #mapoli

⁦@JimLyonsMA⁩ Go ahead and try and force your god on us. #mapoli https://www.bostonglobe.com/2022/05/21/metro/massachusetts-republicans-gather-springfield-with-trump-backed-geoff-diehl-likely-get-activists-nod/