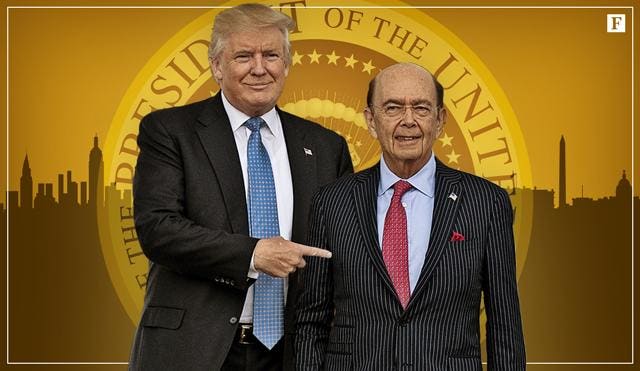 Donald Trump and Wilbur Ross in 2016

The New York Times reports this evening that Wilbur Ross, Secretary of Commerce, “threatened to fire top employees at NOAA” because they had the audacity to speak the truth about Donald Trump’s absurd claim that Alabama was ever threatened by Dorian (emphasis mine):

WASHINGTON — The Secretary of Commerce [Wilbur Ross] threatened to fire top employees at NOAA on Friday after the agency’s Birmingham office contradicted President Trump’s claim that Hurricane Dorian might hit Alabama, according to three people familiar with the discussion.

That threat led to an unusual, unsigned statement later that Friday by the National Oceanic and Atmospheric Administration disavowing the office’s own position that Alabama was not at risk. The reversal caused widespread anger within the agency and drew criticism from the scientific community that NOAA, a division of the Commerce Department, had been bent to political purposes.

Officials at the White House and the Commerce Department declined to comment on administration involvement in the NOAA statement.
…

“Bent to political purposes” is a very gracious way to phrase what seems to have happened. Secretary of Commerce is an old political crony of Mr. Trump, going back twenty five years. Forbes magazine (not exactly a liberal left-leaning rag) seems to have nailed it in December of 2016 (from the above link):

For those seeking influence in Washington, the president’s cabinet is the highest echelon. While concerns about potential conflicts of interest mount, one person who will have the Commander-in-Chief’s ear is his billionaire pal Ross. Will Trump and Ross’ latest deal be good for America’s balance sheets, or their own?

While our feckless Speaker of the House continues to agonize about her political future, senior scientists who are our first line of defense against the rapidly unfolding climate catastrophes all around us are threatened with FIRING because they dare to say what is glaringly obvious to the entire world — Donald Trump is petulant child with a nuclear arsenal and a cadre of ruthlessly corrupt sycophants at his command.

What is the point of the 25th Amendment, Article 2, or any other aspect of the rule of law if our government will not or cannot use it?

The Biden campaign announced a 2035 clean electricity standard and a commitment to 40% climate investments in communities of color today. Massive, massive wins for the environmental justice and climate movements. I promise it's more important than the other discourses occurring.

Your periodic reminder that the gas Enbridge wants to pull from PA to go to Canada is unneeded. Unneeded in MA, a little taken in ME, not needed in Canada.... hmmm, where would it go? Who'd have to suffer for exported gas overseas?