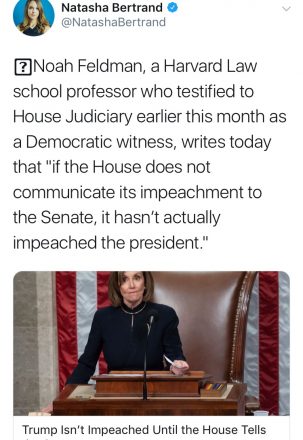 This Feldman opinion is interesting…in a bad way.

On the other hand, as far as constitutional scholars go, Laurence Tribe trumps Noah Feldman. Nonetheless, this could be damaging in any Supreme Court case, should one ultimately be possible. What is the immediate effect? This could take some leverage from Schumer and Pelosi.

To me, Feldman’s critique is fatally flawed in that it denies a crucial reality: the House vote did, in fact, occur, and it is the House, NOT the Senate, that is given the power to impeach.

The vote occurred. It is an inescapable fact. As inescapable as the language in the Constitution that assigns the sole power of impeachment to the House, not the Senate.

Our Legislature could have chosen to allow ballots postmarked by Primary Day to count.

They chose disenfranchisement instead.

Last week, I spoke to Adam Reilly about the trumpist commitment to violence. Sadly, Trump's coming out as the boss of Proud Boys confirms much of what we discussed.
Storm Clouds: Aleksandar Hemon On Yugoslavia Then And The US Now https://www.wgbh.org/news/politics/2020/09/29/storm-clouds-aleksandar-hemon-on-yugoslavia-then-and-the-us-now

It is, unfortunately, a good day to listen to the latest Scrum--in which @sashahemon warns that the US looks increasingly like his native Yugoslavia, where political violence ran amok in the 1990s https://wgbh.org/news/politics/2020/09/29/storm-clouds-aleksandar-hemon-on-yugoslavia-then-and-the-us-now via @ZoeSMathews, @kadzis & @WGBHNews

Dear Maine: Susan Collins is not the senator you are looking for... not anymore. She’s not a moderating force nor independent. She enables the extreme forces in the GOP, including their quest to gut the ACA. The @BostonGlobe Editorial Board: https://www.bostonglobe.com/2020/09/30/opinion/susan-collins-is-no-longer-good-fit-maine/?et_rid=868825659&s_campaign=todayinopinion:newsletter @GlobeOpinion

It seems that the question should be, "why won't Trump condemn terrorism."

That's what this is. Not just a belief that whites are racially superior. But that they should be able to use intimidation and--at times, violence--to enforce an unequal status quo.