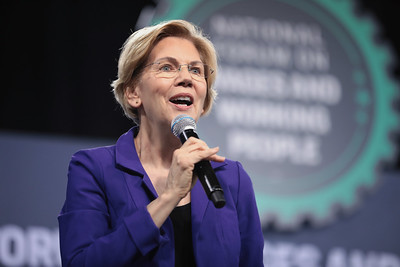 I was at Arlington Town Hall yesterday a little after 8am, and there were a fair number of folks taking advantage of the ability to get their votes in ahead of Super Tuesday.

I very much appreciate jconway’s remarks on supporting Bernie Sanders. A time of radical evil demands a bold and defiant response from civilized people — those of us who under different circumstances would prefer to work things out amicably and equitably. There are many excellent reasons to vote for Sanders, and his ability to motivate people — to realize the hole we’re in, and to imagine a better future — is one of them.

The Sanders agenda is stirringly ambitious — all the things we want, including some things we used to take for granted, like affordable college. A Green New Deal is necessary for our survivial, not a moonshot. Genuine 100% universal health care, guaranteed by the government (call it Medicare for All if you like) is a human necessity. A young generation has been abandoned by the “free market”, whose present and future have been irreversibly sabotaged, is demanding its due. Attention must be paid.

But if you want to know why I voted for Warren, here it is in a nutshell, from Tuesday’s debate:

WARREN: You know, but Bernie and I agree on a lot of things, but I think I would make a better president than Bernie.

And the reason for that is that getting a progressive agenda enacted is going to be really hard, and it’s going to take someone who digs into the details to make it happen.

Bernie and I both wanted to help rein in Wall Street. In 2008, we both got our chance. But I dug in. I fought the big banks. I built the coalitions, and I won.

… I dug in. I did the work. And then Bernie’s team trashed me for it.We need a president who is going to dig in, do the hard work, and actually get it done. Progressives have got one shot. And we need to spend it with a leader who will get something done.

Bernie Sanders is a great story; I’ve been following his career since he was mayor of Burlington. Sanders went from mayor (a good one!) to the US House to the Senate. He has done it right, holding town halls everywhere, being available, and building trust.

But Vermont is a small state: 170 miles from Newport to Brattleboro, e.g. It has no major media markets. It’s easier (I won’t say easy) to be virtuous with respect to moneyed interests, if you don’t have to run a media campaign in a state like, say, California or New Jersey.  He’s had his hand in some good things as a US legislator; and also a few things that haven’t aged well in our conscience, like the 1994 crime bill and his vote against the Brady Bill. He has never had to work on the executive level above Burlington, a town of 50,000 people.

If he gets elected, he and his staff and his movement will be in over their heads (if they aren’t already): If all goes well, they’ll be dealing with a Democratic Congress bound to be balky and recalcitrant, every “centrist” pointing to their own constituency and saying, “well, I got elected too.” That’s normal and in the way of things. But I find the idea that he alone can deliver the goods, like the Great Pumpkin to the children in the most sincere pumpkin patch, a little oversold.

I’d rather have someone who has some textured life experience; who has changed her mind when new facts challenged her perceptions; who has entered into complex and bewildering arenas of power, and somehow come out victorious; who went to public colleges and somehow ended up teaching at Harvard Law; a “serious public intellectual” on matters of great consequence for justice; who is esteemed as a kind  and genuine person (and funny); who is motivated by deep sense of decency.

She was a debate club champ in high school. She got married at 19. She eventually graduated from University of Houston; she taught special ed for a year, then went to law school at Rutgers. She moved from strength to strength — teaching at University of Houston; then to U of Texas; Penn; and finally Harvard Law School. In the cliquish, credentialing-heavy world of law, this kind of career path hardly ever happens.

Her research found that family bankruptcies were not the result of profligate spending, but usually the result of families trying to afford more desirable communities for their children; and medical debt. She confronted Democratic Party luminaries (like Joe Biden and Hillary Clinton) over their support for the shameful 2005 bankruptcy bill. She set up, but was not permitted to run, the Consumer Finance Protection Bureau, which returned nearly $12 billion to borrowers —  which the Trump administration naturally locked down.

And as we know, she was drafted into the Massachusetts Senate race against Scott Brown, who was quite popular at the time; and as a complete newcomer to electoral politics … she paddled him good: 54-46%.

So I’d like to have someone who’s already tangled with a few lions, to throw into the arena with special interests. Maybe someone who has come up from not-much; with demonstrable character strengths forged in great challenges.

I don’t know, folks. I know she’s behind, even  in MA, and time is running out nationally. So what? Vote for whom you want. When someone like Elizabeth Warren runs for President of the United States, I just don’t see how you pass that up.

PS: The elephant in the room: She’s roughly the same age, hair color, education level, and gender as Hillary Clinton. If you think that’s not affecting people’s votes, I don’t think you know human nature.

Here’s a thread I wrote a while ago: