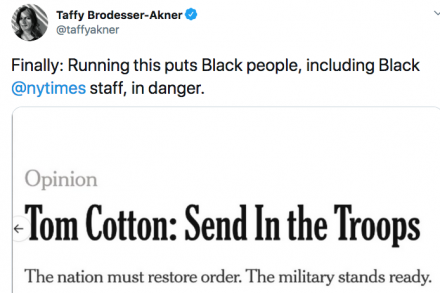 After years of militarization of our police, and centuries of state-sanctioned violence against Black Americans, the New York Times runs an op-ed by a sitting (unchallenged) Senator that calls for  straight up having the military invade our own country. To learn more about the danger of this moment, we should look carefully at history (especially President Hoover ordering MacArthur, Eisenhower, and Patton to attack the out-of-work protestors and WWI veterans known as the Bonus Army–spoiler alert:  the three war heroes just followed orders.) However, I hope to call your attention to an older historical experience that is similar to current events. We can learn from the history of anti-Semitic rhetoric (which leads to violence) from this NYTimes writer, Taffy Brodesser-Akner, @taffyaknerwho risks being fired by criticizing her employer:

Here’s the thing I think about opinions, and I was taught it very young. When the anti-Semite says, “The Jew is a pig,” the Jew wants to respond, “I’m not a pig. A pig has hooves, whereas I have hands and feet. A pig has a snout, whereas I have a nose. See? Not a pig!”

Instead, the right thing to do is not to allow the anti-Semite to be comfortable telling me his opinion, not to give him space to say them, because those arguments — that I have hands/feet and a nose — do not really address what the anti-Semite is saying.

The fight isn’t fair. It is not my obligation to be reasonable in the face of it. Hatred dressed up as opinion is not something I have to withstand. HATEFUL IDIOT WANTS TO INVADE OWN COUNTRY is a great headline for a news story, and should be reported with some horror.

I love working at the Times and most days of the week I’m very proud to be part of its mission. But tonight, I understand the people who treat me like I work at a tobacco company. I stand with my colleagues.

This is the morally and intellectually correct approach.  The NYT and its editors and publishers must be called out on their willingness to elevate rhetoric that will further racist violence, like Tom Cotton’s opinion.

Not long after 2016, the New York Times ran op-ed pieces advocating that everyone consider banning non-white immigrants (the goal of Trump, Stephen Miller, and Steve Bannon) as if we were arguing about marginal tax rates, and I called up to cancel my subscription. Immigrants–documented or not–are human beings and must be treated with dignity and respect for their human rights. The guy on NYT phoneline tried to sell me on a marketplace of ideas, and I was not having it. Go to any grocery or farmer’s market where you will see people selling vegetables, fruits, cheeses, breads, meats… but you will not see nuclear waste on sale. Some ideas turn the marketplace of ideas into a hazardous zone where people are not safe.

The problem of “objectivity” in journalism goes far back. “Objectivity” was invented in the 20th Century, and the latest episode of Scene of Radio takes a rigorous, fact-based look at how white journalists, including the New York Times, promoted it at the expense of the vulnerable. I highly recommend listening to this episode (and the whole season, The Land That Never Has Been Yet) as way to understand what is undermining democracy in America.

The response needs to be overwhelming to this. And yes, the publisher could take the wrong idea from this, thinking he has driven up web traffic and shares to his website, so we really do not know if massive opposition will teach them to stop giving hate a platform, but we can not sit silently for this. This is one important step out of many that need to be taken in our country.

Homes for All Massachusetts @homesforallmass ·
21m

“A group approx. 25 Lynn activists drove to Boston Sat morning, where they rallied outside the State House — alongside dozens of housing justice advocates, labor union leaders and tenants — in support of a legislative rent control package.” https://www.itemlive.com/2023/01/29/lynn-activists-rally-for-rent-control/ #MApoli

Jim Jones Lyons @JimLyonsMA team of Spaceballs are running out of time to further take the @massgop from suck to blow! Don't get your Schwartz twisted, Lyons, Door-Dash Diehl and Motormouth McMahon are preparing to jump to LUDICROUS speed to finish the job! #DumpJimLyons #mapoli

"We are taking every single precaution and really sparing no expense to ensure that both patients and providers can feel safe, that their personal information will not be shared." #mapoli https://www.masslive.com/politics/2023/01/mass-launches-abortion-legal-hotline-in-new-push-to-defend-reproductive-care.html