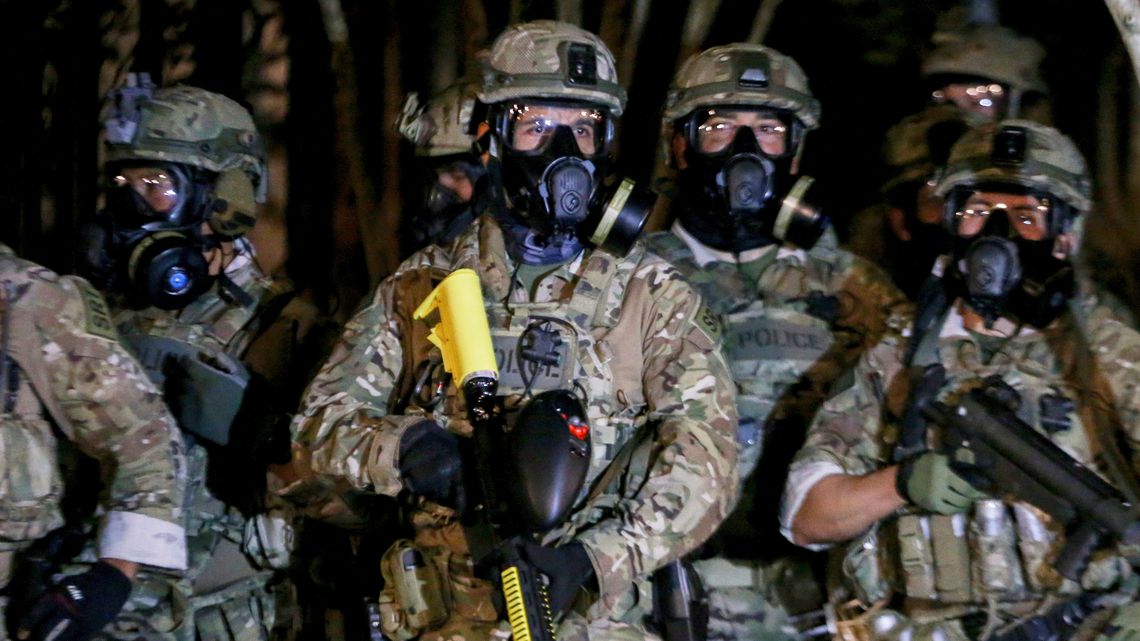 Federal troops in Portland, OR

The New York Times reports that the Donald Trump administration — presumably with support from the GOP — plans to execute an armed federal takeover of major US cities (emphasis mine):

President Trump plans to deploy federal law enforcement to Chicago and threatened on Monday to send agents to other major cities — all controlled by Democrats.

Governors and other officials reacted angrily to the president’s move, calling it an election-year ploy as they squared off over crime, civil liberties and local control that has spread from Portland, Ore., across the country.

With camouflage-clad agents already sweeping through the streets of Portland, more units were poised to head to Chicago, and Mr. Trump suggested that he would follow suit in New York, Philadelphia, Detroit and other urban centers. Governors and other officials compared his actions to authoritarianism and vowed to pursue legislation or lawsuits to stop him.

Those of us who have been paying attention to the nightmare in Portland Oregon are not surprised.

Meanwhile, NPR reports that Democratic leaders in Congress have asked for an immediate briefing about foreign election interference, citing information contained in a classified appendix to their letter (emphasis mine):

Democratic leaders in the Congress asked the FBI for an all-lawmaker briefing on Monday about foreign election interference efforts that may be targeting the legislature this year.

“We are gravely concerned, in particular, that Congress appears to be the target of a concerted foreign interference campaign, which seeks to launder and amplify disinformation in order to influence congressional activity, public debate, and the presidential election in November,” the members wrote to FBI Director Christopher Wray.

A congressional official said the material was based on reporting and intelligence from within the government.

This moment requires more than sanctimonious tut-tutting in the halls of the Capital. The time has come to STOP this tyranny. Donald Trump and his thugs are NOT waiting until November.

We are in a large building that is in the first stages of a fire. We see flames showing in specific places and smell smoke throughout the building. Telling ourselves that we should — or must — “wait until November” is like telling ourselves to wait until the sprinkler system is set off before starting to fight the fire. We don’t know that the sprinkler system is capable of putting out a widespread fire. We’ve never had a fire large enough to really test the sprinkler system. We should be putting water on the fire RIGHT NOW, while simultaneously opening the windows and venting the smoke.

Waiting until November primarily serves to give the hostile forces that are attacking us three more months of essentially unrestrained activity. We are under attack by hostile forces. NOW.

The moment of truth for American democracy has arrived. Is our political system capable of stopping this ongoing authoritarian takeover, or not?

I predict the Wall of Moms in Portland may become a far more enduring representation of the future of America than the “Wall” along the Mexican border. Dan Rather