Even as we enjoy a weekend of mild weather; even as we have an epic Senate primary, at least a half dozen state rep races that I should be paying attention to; and the MA-4 primary … I want to talk about Iowa. 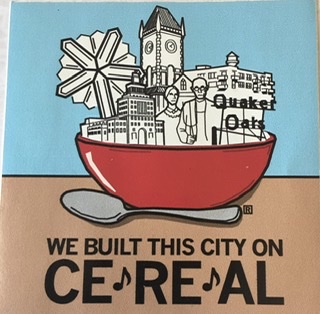 So, I like Cedar Rapids. I had a gig there a few years ago with a good orchestra, good chorus, nice people; I was staying next to the Quaker Oats plant, where one could smell maple oatmeal being manufactured. It’s got hipster areas; places to run; several breweries; biking; a really inspiring Czech cultural museum and the African American Museum of Iowa;  a beautiful downtown library and art museum with paintings by local boy Grant Wood. I was supposed to go out there again this spring, traveling by train and bus to lower my emissions — a hassle/statement I was willing to make. But then COVID-19 happened.

Six days ago Iowa was devastated by a derecho, a kind of land hurricane that moves east like a regular storm front but produces winds of hurricane strength.

Remember that the Cedar Rapids downtown was completely flooded in 2008; there was another flood in 2016; and last year we had historic, biblical flooding throughout the heartland, from Nebraska to Ohio.

This event is not getting the media coverage that it deserves because we’re all a little distracted. So we’re left with “citizen journalism“, people fending for themselves and using their phones and Twitter to report on their reality. The effect on our food supply from the flooding last year was noticeable. Now there’s any number of farms or people have no idea if they’ll ever be able to come back from the succession of disasters. See a first-hand account after the “There’s More” break.

Anyway, this is our climate reality, today, now. What can we “do” about it? Go Ed Markey. It’s what we’ve got.

I don’t want to be bitter, but maybe those Iowa voters could do something too.

Charley on the MTA
Author
Famed Member
Reply to  Trickle up

Absolutely – though I’d point out that the state Senator from Cedar Rapids, Rob Hogg, is a climate hawk(eye). I’d thought about trying to get an interview with him while I was out there.

I have the same reaction as TrickleUp. I saw the prominent piece about this event in this morning’s Sunday edition of the New York Times (https://www.nytimes.com/2020/08/15/us/midwest-storm-farms.html). I also notice that the comments section is turned off on it.

I’m glad that Rob Hogg is on the good side of this. Nevertheless, large areas of Iowa voted for Donald Trump and Charles Grassley in 2016.

The above piece concludes with a quote from Lance Lillibridge, a farmer in Vinton:

And on Monday, fields of battered corn left him wondering: “When the hell is this going to stop?”

I think it’s time to LOUDLY respond to Iowans like Mr. Lillibridge that this not only will not stop, but in fact is likely to get MUCH worse if he and his fellow Iowans continue to keep their collective heads in the sand (or elsewhere) about climate change.

Last edited 6 months ago by SomervilleTom
2
0

There’s hope for Iowa in both the presidential and senatorial races this year.

I think we do a disservice when we talk about blue states/red states. It’s really blue cities/purple suburbs/rural red anywhere you go in America. Texan Democrats these days are about as liberal as Massachusetts ones. Jim Lyons is just as Trumpy as his counterpart in Mississippi. It just so happens that Iowa’s cities are all outvoted by the rural areas, but their suburbs are trending blue.

I’m bullish on Biden/Harris in IA along with Theresa Greenfield. the Democratic Senate candidate. I saw plenty of rainbow flag and Obama stickers when I campaigned in Iowa in 2008 (he did win it twice).

Just as it was immoral for Kushner and his cronies to write off “blue states” during Covid, we shouldn’t write off red states with the climate crisis. Especially since in the Midwest so many of the poor people in the flood plains are likely to be immigrant agricultural workers. A doctor couple in Des Moines we went to college with got affected by the derecho despite being two hours away. My friends in Chicago and my in laws did too. These are only going to get worse and it’ll take all hands.

Lastly, it’s not like our blue state is setting any records for climate action…

I understand this argument. I think the result is the paralysis that has already been so costly.

If Lance Lillibridge, the farmer quoted in the piece, didn’t vote for Donald Trump and Charles Grassley, then most of his neighbors did. If votes don’t have consequences, then what is the point of voting?

Our blue state has NOT been sending House and Senate delegations who steadfastly oppose taking action against global warming for decades. Have you compared actions taken by MA with actions taken by IA?

Votes have consequences. Iowa voters, like voters in most of America’s farm belt, have sent representatives to Washington who oppose climate change for decades. Those farmers are now first in line — as some of us have been telling them for decades — as the climate shinola hits the proverbial fan.

I have sympathy for immigrant agricultural workers who get caught in the crossfire. I do NOT have sympathy for farm owners like Mr. Lillibridge who vote irresponsibly until it’s too late and then whine about the consequences of their own acts.
﻿

Last edited 6 months ago by SomervilleTom
0
0

A Rhode Island-sized piece of ice just broke of Antarctica. The video of the breach in a 500-foot thick Brunt Ice Shelf is absolutely staggering