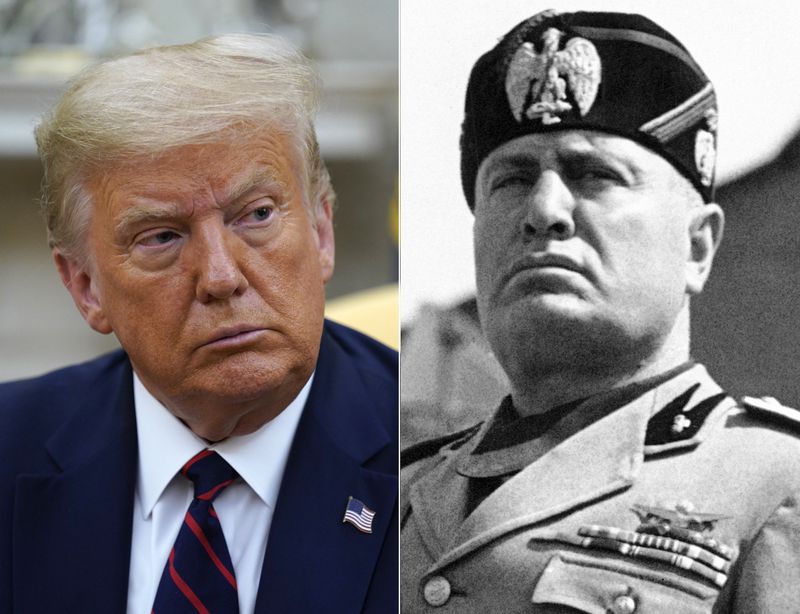 The first “debate” showed how toxic Donald Trump is to America. I suggest that the mainstream media need to do more than just cancel the remaining scheduled debates.

I think our media has a duty and obligation to proactively inform America about the dangerous parallels between Donald Trump and Benito Mussolini. I’ve been making the comparison here since the 2016 campaign — Mr. Trump has modeled the gestures, cadences, facial expressions, and mannerisms of Mr. Mussolini. In early August, House Majority Whip Jim Clyburn made the same comparison on “Meet the Press”.

A few days ago, Presidential Historian Michael Beschloss
was even more explicit:

You want to go into history to look for something like this, go into Italian history and look at Mussolini. This is the way dictators come to power. He’s telling you what he intends to do, and we’ve got to make very sure that in the next five and half weeks and after that we do not get in a situation where just as Senator Sanders was saying tonight, Donald Trump announces that he’s won and puts us in a situation where our democracy is being stolen minute-by-minute. This is not a drill. Franklin Roosevelt said in 1940, at the time of Adolph Hitler, “Never before since Jamestown and Plymouth Rock has American civilization been in this kind of danger”. We’re approaching that point tonight.

Too few Americans know who Benito Mussolini was, how he came to power, and what happened to Italy and the world as a result. We don’t teach enough history in our public schools, and we focus so much attention on Hitler that Mr. Mussolini becomes a forgotten footnote.

Two more presidential debates are scheduled, on 15-Oct-2020 and 22-Oct-2020. The “Commission on Presidential Debates” should cancel both, and the mainstream media should use the resulting three hours to educate the American electorate about Benito Mussolini and how he seized power in Italy.

I do two days on Mussolini and connect it to Trump and Berlesconi. Also how the whole establishment just rolled over for him and later in Germany for Hitler and thought they could contain them. A lot of prescient lessons. Mussolini is more apt since he was in power longer and developed the modern authoritarian playbook. It’s also why I still cover Napoleon since he really was both a populist and an authoritarian who twisted the aims of the revolution and it’s republican values for his own end.

Still not convinced we are in Mussolini territory, but they should educate on how our system actually works and all the ways Trump has distorted it.

I think the bigger danger isn’t that Trump has the actual power to disrupt the vote count, but that he and his supporters think he does and the media is refusing to call them out for their lies. Tell the lie often enough, and it becomes the truth.

The PA AG was on Chris Hayes’s show tonight and first thanked Chris for using the term lie. Then he proceeded to explain that PA law does allows the parties to have a limited number of registered observers at the polls, but you can’t just invade a polling location with an army of random people. States I have dealt with have similar laws. He also said something that we all need to remember: “America is stronger than Trump!” If there is any election day intimidation or violence I suspect it will be a few lone wolves and nothing on the scale that will be memorialized in our history books decades later as accompanied the elections that brought Hitler and Mussolini to power.

This won't do at all.

@SenMarkey
@SenWarren
This is horrible

They did the same with Obama and the economy in January '09.

Yesterday Hannity was ranting about how it’s awful that Biden hadn’t solved the COVID crisis yet, hours after he was inaugurated https://www.mediamatters.org/sean-hannity/sean-hannity-attacks-president-biden-not-having-covid-pandemic-under-control

My mother is very proud that I’m the one dropping an f bomb in this bitch. Seriously though, it’s time to widen the lens of climate accountability. Big Oil relies on enablers, and they shouldn’t escape scrutiny https://twitter.com/billmckibben/status/1352389540334481410

Ad agencies and PR agencies are renting themselves to the fossil fuel industry, supplying the creative juice necessary to wreck the planet. Please--do something different with your talents!

@BostonDotCom Seventeen speeding tickets, at least 7 wrecks, and 6 license suspensions. Why do we need to wait until someone dies before permanently revoking the license of a driver who has repeatedly demonstrated that they can't be trusted to operate an automobile safely? #mapoli #ZeroVision

@bluemassgroup @BostonGlobe More details not behind a paywall: