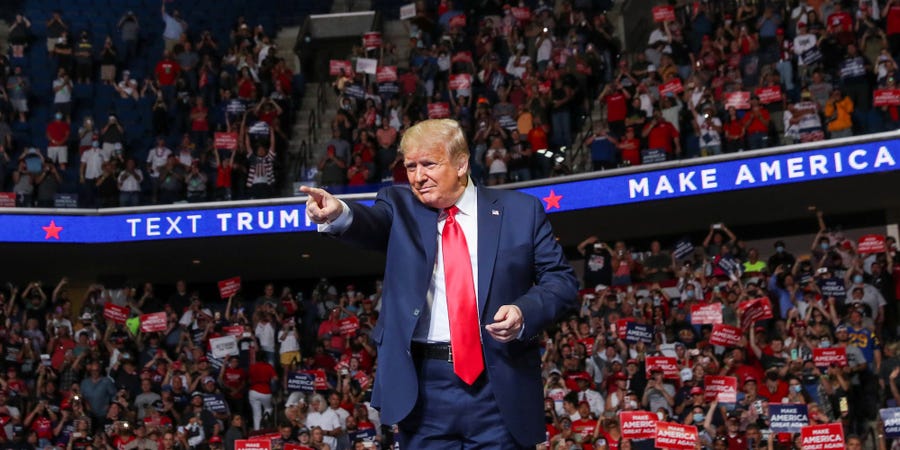 President Donald Trump at his campaign rally in Tulsa, Oklahoma, on June 20.

President Donald Trump on Wednesday appeared to encourage people in North Carolina to vote twice — once by mail and once in person — during the November general election to purportedly double check that their initial vote was counted, which is already receiving push back from state election officials.
…
According to North Carolina law, it’s a felony “for any person with intent to commit a fraud to register or vote at more than one precinct or more than one time, or to induce another to do so, in the same primary or election, or to vote illegally at any primary or election.”
…
“First, the legal perspective: all states have mechanisms in place to make sure a voter cannot cast both an absentee vote and an in-person vote,” Pildes said. “A typical rule is that if your absentee ballot has not yet been received and you show up to vote in person, your in-person vote will be counted and your absentee ballot will be rejected. But if your absentee ballot is already recorded as having been received, you will be asked to cast what’s called a provisional ballot and that ballot will then not be counted once it’s confirmed your absentee ballot has been received.”
“But from a public policy perspective, these comments are only going to stir enormous confusion,” he added.
…
Encouraging voters to double up on their votes could be particularly problematic in North Carolina, which has a complicated history with election fraud. Recently, a political operative hired by a Republican congressional candidate was indicted for directing an illegal scheme involving absentee ballots. And an increased number of duplicate ballots in the middle of an election already seeing more mail-in ballots because of the pandemic could further slow tabulations in the swing state on Election Day.
…

If you’re wondering whether or not Mr. Trump is being misquoted, see for yourself — starting at 1:50 in the interview:

“They will vote and then they are going to have to check their vote by going to the poll and voting that way because if it tabulates then they won’t be able to do that. So, let them send it in and let them go vote, and if their system’s as good as they say it is then obviously they won’t be able to vote. If it isn’t tabulated they’ll be able to vote. So that’s the way it is. And that’s what they should do. I don’t like the idea of these unsolicited votes, I never did. It leads to a lot of problems. They’ve got eleven problems already on very small contests so I’m not happy about it. At the same time, we’re in court for a lot of it, we’re going to see if it can be stopped. But send in your ballots, send them in strong whether its solicited or unsolicited the absentees are fine we have to work to get ’em you know unintelligible and you send ’em in but you go to vote. And if they haven’t counted it, you can vote. So that’s the way I view it.

Indeed, that’s the way it is — a sitting Republican president is explicitly encouraging widespread voter fraud.

We seem to be so numb from the relentless onslaught of publicly-committed crimes by this president that we just ignore them. We should not.

Donald Trump is literally and explicitly encouraging widespread voter fraud. Is anybody going to do anything about that?