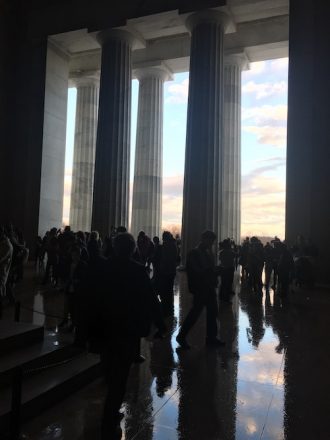 From the inside of the Lincoln Memorial, Dec 2019

And so the Presidency of Joe Biden begins. It is beautiful and telegenic — the rippling flags on the Mall and the ranks of National Guard making a striking image. The latter should have been unnecessary: This isn’t a peaceful transfer of power, but a transfer nonetheless, and a patriotic event in spite of everything. I appreciate Sen. Blunt’s gracious and appropriate remarks, acknowledging the unconscionable threat to democracy posed by the rioters, and honoring and even celebrating the result of democratic processes.

The change of tone, the honorable use of the bully pulpit, will be such a vast difference we will hardly know how to receive it. (The absence of Trump from the usual media megaphones is palpable, isn’t it?) Biden is stubborn about appealing to unity, even while acknowledging that it sounds like a fantasy. I suppose that’s his duty. Nonetheless, he spoke of “lies, lies told for power and for profit.” Unity doesn’t mean losing discernment. Biden is where he is because he walks that line. He’ll get no allowance in the arenas of social media, where having two ideas in mind at a time is suspect. Fortunately he pays no attention.

Biden has shown himself to be more impressive than I would have expected: More resilient, more temperate — but also bolder when necessary, when the facts demand it. “It’s time for boldness”, he says, exhorting the public to move forward in ways that he’s already demonstrating. His kind of expansive, hopeful decency is the way out.

Onward, not a moment too soon.

🖋 Sign “POTUS, sign an EO guaranteeing at least 7 paid sick days to railroad workers!” and I’ll deliver a copy to your officials: https://twitter.com/messages/compose?recipient_id=835740314006511618&text=sign%20PGHBUB

🖋 Sign “The Senate must pass legislation to rein in the Supreme Court!” and I’ll deliver a copy to your officials: https://twitter.com/messages/compose?recipient_id=835740314006511618&text=sign%20PYJNCJ

The only reason Jim Jones Lyons could win re-election is because of his cult following of misfits. #mapoli

Jim Lyons, who has presided over a series of defeats as the chairman of the state Republican Party the last four years, is not only likely to pursue reelection in January, party operatives said, but he could prevail, @samanthajgross and @emmaplatoff report https://www.bostonglobe.com/2022/12/01/metro/after-disastrous-election-state-gop-faces-choice-fresh-leadership-or-more-same/?event=event25

A few dozen demonstrators gather outside the JFK Library and Museum where @POTUS just arrived to meet with Prince William. Demonstrators are upset with the Railroad agreement signed by the president today. #mapoli

💯FACTS! Ellen, I was surprised that wasn't you reporting.🙄🤦🏾‍♂️ Keep up the good work in Boston @nytimes 👏🏾 #BOSpoli #MApoli

The new NYT Boston bureau chief, @jrussglobe, reported on the royal visit from the Eire Pub in Dorchester, where the vibe was, shall we say, unimpressed.