A new report from Brown University* proves what we already knew: Climate action in Massachusetts is bought off and delayed by well-heeled special interest lobbies. This is in spite of overwhelming public support in polls, and a display of activist power in the form of testimony at hearings and the like.

The most blatant example of this comes in the form of Governor Baker’s veto of the climate bill, citing cost figures for a net-zero stretch code ($6 billion! Wow!) that no one can figure out where they come from or how they’re derived. It doesn’t take too much imagination to infer that they came from the real estate development lobby.

From the Brown report’s executive summary — it’s about what you’d expect, and what you’ve been hearing for years about Our Dumb Process [emphasis mine]:

The study can be summarized in a dozen findings we document with quantitative and interview data:

Our systematic review shows that the vast majority of public testimony given in legislative committee hearings supports climate action—major energy and utilities corporations and their trade groups only rarely submit public testimony in opposition to legislation advancing climate action here. Despite seeing strong support in legislative testimony for environmentalists’ priorities, however, the evidence shows a completely different story behind closed doors. We find that the state’s utilities and their allies are the most powerful actors in the state climate and energy policy landscape. Fossil fuel, real estate, and power generation interests also play significant roles opposing environmentalists in the legislature. 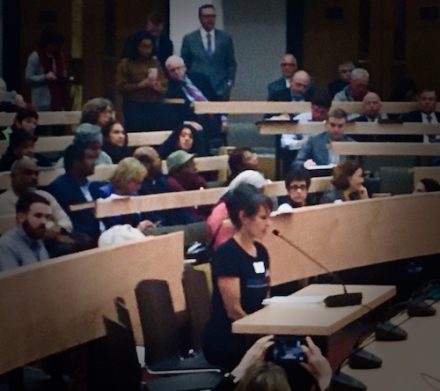 A singular moment: Sonja Tengblad of Mothers Out Front sings “What a Wonderful World”; Gardner Auditorium, State House, 11/12/19. (Does the real estate lobby sing to the Governor behind closed doors?)

This definitely squares with my observations. You never hear much dissension in a public hearing, and the rooms tend to be packed with enviro coalition members, who have done their homework and brought people out to show public support, which is real, broad, and deep. You would hardly be aware of a fossil fuel lobby! AIM doesn’t poke up its head; the real estate industry doesn’t send in a flack to push back (as far as I can remember); etc. Why not? Oh, they’d get hissed, or at least endure some serious side-eye in a hostile room. Their demands are not popular! Not in a hearing room, and not in the public at large.

Now, it’s interesting that this report comes out now, when the climate bill, and the legislature itself, are in a bit of flux. The Roadmap bill did pass, after all, and it’s a major bill. It did not include, however, the mandate for 100% renewable energy by 2045 (Garballey-Decker amendment), which would have had sharper teeth and higher ambitions. Speaker DeLeo didn’t allow the bill in its entirety to pass until the absolute last minute of the session and his own Speakership. As former Sen. Ben Downing has stated and the report re-states, this timing enables lobbyists and leadership at everyone else’s expense:

This haphazard process benefits one group and one group only – entrenched special interests. Without time for public debate and input, special interests defending the status quo have an outsized voice. They are able to kill or water down some of the very proposals which could help tackle the major issues Massachusetts is facing, simply because the legislature waited till it was too late. Instead of having to defend their position multiple times under the harsh light of public scrutiny they are able to do so once or twice, if at all, in hushed conversations in the State House halls.

This leaves us waiting for a plume of white smoke announcing a bill … or as has been the case up to this point, nothing.

So, nothing we didn’t already know, I suppose! Kudos to Speaker Mariano and Senate President Spilka for putting the bill back in the Governor’s face  — although, as Sen. Barrett worries, this is definitely an opportunity for even yet still more big-money lobbyist mischief. We should keep the net-zero stretch code.

It shouldn’t have taken this long. We’re not on time; we’re about 30 years late. All this special interest power has deprived us of time we didn’t have.

*Ironic we had to get a Rhode Island joint to point out our faults.

What are the obstacles to public funding of educational enrichment programs in Boston Schools?

Anyone out there shedding any tears for John Fish over his latest legal imbroglio? Class? Anyone? @BillForry? #bospoli? #mapoli?

A failed Back Bay condo tower is triggering a legal dust-up between construction magnate John Fish and a development team co-led by his former right-hand assistant.

Wind and solar are the cheapest way of generating electricity. The market is expected to grow 50% over the next 5 years.

In 2016, Meyers-Crothers was the victim of racist bullying from Mitchell Miller, who was recently signed and released by the Boston Bruins.