Middlesex County, Massachusetts is huge. According to Wikipedia, it has a population of more than 1.6 million people, with 818 square miles of land area. As a governmental entity, Middlesex has been neutered, electing only a small core of officers (district attorney, sheriff, registrars of deeds and probate) to perform functions that are vestigial offices of county government.

Yet, our county retains its geographic identity alongside 3,143 counties and county-equivalents across the United States. Steve Kornacki, a native of Middlesex County, is fond of ignoring it while devoting fond attention to counties with 1% of the population of the county of his youth. The vast size of Middlesex has rendered it useless as a descriptor of much of anything. Extending from Ashby to Holliston, to North Reading, to Cambridge, there’s a whole lot of a whole lot of things happening that defies a meaningful summary.

Those little counties adored by Steve Kornacki are all centered around a county courthouse, and have become units of analysis on all kids of measures. Middlesex has a population greater than 12 states, including four New England states (ME, NH, VT, RI), and like a state it has a dozen district courthouses and corresponding judicial districts; seven of these districts have a population greater than the average US county (104,435).

The 12 “counties” of Middlesex.

If you combine the Boston municipal courts into one unit, there are 63 judicial districts in the Commonwealth. the population of the average Massachusetts judicial district (103,930) is slightly smaller than the national average for counties. These 63 districts, if we declared them to be the equivalent of counties, would make our data comparable to the rest of the nation.

If we call the judicial districts counties, what do we do with the existing counties? We find a new name for them, possibly regions. Where county commissions currently exist, they can become regional commissions. Sheriffs, district attorneys, registrars of probate and deeds could serve regions.

Changing counties to regions and judicial districts to counties is a semantic game. Though it would require more complex legal language to enact it, it requires nothing more than clerical accuracy by the folks combing through the law to identify instances in the text and make adjustments to the language therein. There may be some requirements to describe regions, formerly known as counties, when pointing toward the few constitutional provisions related to counties. Again, this is not a functional change, but it does revolve around items such as the drawing of legislative districts to correspond (as much as possible) within county borders.

That said, the real fun in this proposal would be to name the new counties. Counties could be named for famous folks or prominent geographic features attached to the county, with a preference for names not used for an existing county or municipality. For example, O’Neill county could be named for Tip O’Neill, and the county containing the city of Barnstable (and Hyannis Port) could be Kennedy County.

Here’s a map of the 63 “counties” and their population (2010 census). I think you will agree using these existing districts, served by their very own courthouse, make much more sense for statistical analysis and making decisions based on criteria (such as rates of COVID-19 infection per 100,000 residents). 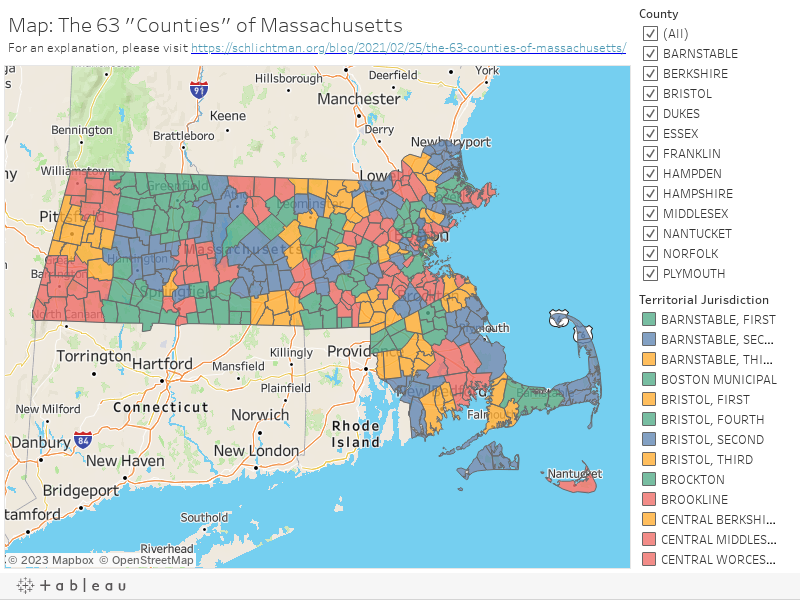 This is an interactive map, available by following this link.