Lost in all the meshugaas from town election last week was a story that got scant media coverage.

The kerfuffle over a high school logo was a shiny object distraction to the historic victory women won by becoming the first majority on the Council.

Anne Danehy topped that race beating out a Trumper wannabe closely followed by current Vice Chair Julie Smith-Galvin who is poised to become the next Chair.  Both are progressive Democrats.  They will join Mehreen Butt and Ann McGonigle Santos on the seven member governing body to move Wakefield forward.

According to Town Clerk Betsy Sheeran, women hold a 1,500 registered voter advantage over men amongst approximately 20,000 overall.  So, it is fitting indeed that the days of women being the electoral bridesmaid but never the bride are finally over.

Or, as wise old Ben Franklin put it: “Democracy is two wolves (a.k.a.  Trumpists) and a lamb voting on what to have for dinner.  Liberty is a well-armed lamb, contesting the brute.”

Fred in his element in Wakefield. As ever, a believer in doing rather than saying. 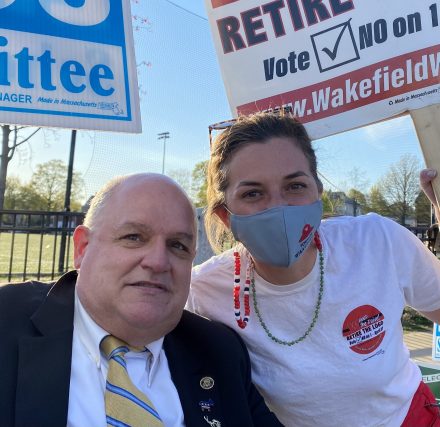 Thank you my friend, Terry McGinty of Warren, for taking time out of your busy schedule to campaign with me to move our community forward.