Okay. I’m rarely useful here with posts based on my job as a defense attorney. Let me be useful for a moment so those who have muted me will actually miss something:

The only evidence that will be dispositive (crucial) in the matter of Trump and January 6th is evidence that shows that he knew that he had lost. Many say he may have been delusional. I highly doubt that. But it matters not what I doubt.

All that will matter is evidence that shows Trump had the ‘mens rea’ (guilty mind) to attempt to commit election fraud or sedition after being cognizant that he actually lost.

Mind reading is almost impossible, but this point is my biggest concern regarding the possibility he walks away from this.

Exactly Christopher. Proving his awareness that he lost will be everything. Everything.

In terms of the criminal law, at least, it is the only thing that actually matters.

Last edited 4 months ago by terrymcginty
1
0

If there is ultimately a trial of this character, you can put money on the proposition that his defense lawyer will maintain that there could be no crime here, because he honestly thought he won.

Last edited 4 months ago by terrymcginty
1
0

Is this the equivalent of the insanity defense?

I suggest we consider the example of Jim Bakker. He was convicted on multiple felony fraud counts, imprisoned, fined.

Mr. Bakker surely claimed that he believed his lies. My recollection is that he also claimed that his utterances were protected because they were expressions of religious belief. His convictions were upheld (although there were issues with his sentencing because of statements made by the original judge).

There is a clear fact-pattern showing that the GOP used specious claims of election fraud to raise hundreds of millions of dollars in campaign contributions from believers.

The facts in this case are clear. I don’t think the state of mind of any participant should have any bearing on the outcome.

I think Tom hit upon it. Trump’s fundraising off that stolen election claims and anything he may have said about fundraising could very easily undermine claims that he was motivated by honest delusions.

The fraudulent fundraising has been perpetrated by the entire GOP — it goes far beyond Donald Trump. It is a mistake to focus too narrowly on Donald J. Trump.

The entire GOP is a criminal organization and should be prosecuted under existing RICO statutes.

It should be illegal to contribute to the GOP while it is in violation of these multiple laws.

Last edited 4 months ago by SomervilleTom
1
0

The problem is, there’s an excellent chance that what happened on January 6th was a rally that got out of hand. I’m of course glad the protesters that day did not come armed, but prosecution would probably be easier if they had.

They were just tourists, after all.

For some things it shouldn’t matter. For example, it seems to me that no matter how genuinely he believed he won Georgia, pressuring the Secretary of State the way he did is not an appropriate way to make his case. 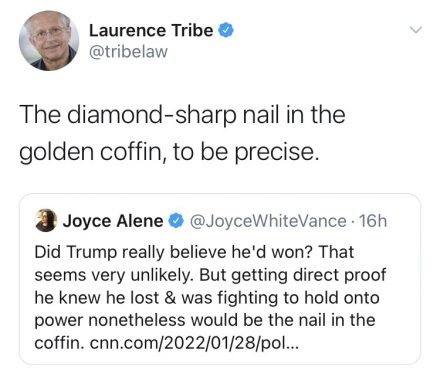 I’m glad legal analysts are finally zeroing in on what is legally necessary for this to proceed as a criminal matter. I beat them to the punch.

Last edited 3 months ago by terrymcginty
0
0

I think there’s widespread agreement that if this were proven, Mr. Trump would face a very difficult future.

I’m not sure Mr. Tribe is making your argument that such proof is a requirement.

A royal flush is a winning hand in five-card draw poker with no wild cards.

A royal flush is most certainly not a REQUIREMENT to win.

I’d be happy with a pair of deuces if that was enough to put Mr. Trump away for a long time.

Last edited 3 months ago by SomervilleTom
0
0

Now he thinks an open confession of criminal intent will protect him the way committing previous crimes openly did.

He may be right, based on W.C.Fields accuracy about a new sucker being born every minute, if we base our prediction on the past 5 years of Americans’ gullibility.. 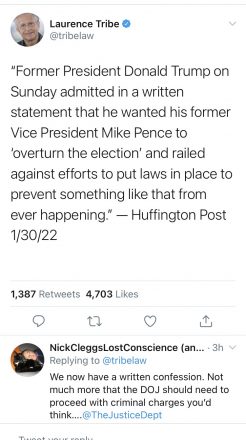 Why only in America? Because only USA🇺🇸puts AR-15s into the hands of 18 year olds with no license or training. And they can kill dozens of people in as many seconds and neither hardened schools nor school distrct SWAT can prevent it https://www.msnbc.com/rachel-maddow-show/maddowblog/only-america-good-question-ted-cruz-walked-away-rcna30885?cid=sm_npd_ms_tw_ma #mapoli #UvaldeMassacre

"Why only in America?"

.@MassGovernor has vetoed the #WorkandFamilyMobility Act. The House & Senate will now need to vote to override the veto. We need YOUR help – take action TODAY to maintain a supermajority support ⤵️ #mapoli
📧: http://bit.ly/dff-email-veto-override

More nonsense from @WeThePeople_MA. Catherine Vitale never had anything to say about this. She never had any issue with @MayorWu, @AyannaPressley, etc. That, however, is not now stopping her from behaving as if only she is privy to the truth, which has been long known. #mapoli

“The Massachusetts State House is the least transparent legislative body in the entire country.” Are we surprised? Let’s get our heads out of our asses & start demanding answers from these dictators! When will people step up & fight in this state?! https://www.forbes.com/sites/patrickgleason/2022/01/12/in-massachusetts-once-a-model-in-government-transparency-key-votes-are-hidden-from-the-public/?sh=1118f4d06683

Senators bankrolled by the NRA: