On Monday January 30th, the Boston Redevelopment Authority (BRA) held a public meeting at Suffolk University, halfway between the State House and City Hall, to change the Boston zoning laws to allow for agriculture throughout the city, making it easier for local residents to grow and sell fresh, healthy, foods in Boston and the greater Boston Metropolitan Area. Nearly 300 people attended. Boston currently has about 150 community gardens serving 3000 gardeners, the highest per capita of any US city. Now the city is trying to figure out how to change zoning to increase urban agriculture beyond gardening and household use into businesses and economic development.

Mayor Menino, the newly appointed chair of the food policy task force for the US Conference of Mayors, opened the meeting and the keynote address was given by Will Allen, Founder and CEO of Growing Power Inc. (http://www.growingpower.org), non-profit based in Milwaukee, WI which also does work in Chicago, Detroit, Ghana, and around the world. Growing Power addresses social justice and food access issues through building local agriculture and farm-based businesses and Mr. Allen won the 2008 McArthur Foundation “Genius” Grant for his work on urban farming and sustainable food production. Growing Power has grown an underutilized 2-acre lot into a farm that produces enough produce, eggs, honey, fish and other meats to feed more than 10,000 local residents and employs more than 100 people on 20 farms, 13 farmstands, and a year round CSA.

They start by growing soil through composting to replace the existing contaminated urban soils and continue with growing worms, mushrooms, sprouts, which alone provide from $5 to $50 worth of production per square foot, and fish in integrated urban agricultural systems. There are seven different levels of production in their greenhouses, some of which are heated by compost. At their main farm, a quarter of their electricity comes from solar electric panels and 70% of their hot water is solar heated. They also have an anaerobic digester for methane production and electricity.

Growing Power also provides hand’s on education and summer jobs for children planting flowers by sidewalks and corners, a measure which actually reduces crime. Green Power also has community kitchens for food preservation and processing. They are now building a five story vertical farm at their national headquarters and planning for 15 regional centers.

Video of the entire proceedings at the meeting, including the presentation by Mr. Will Allen: http://www.cityofboston.gov/cable/video_library.asp?id=2444

The minutes of that meeting, the recommendations by the group, maps of greater Boston food resources, and information about the ongoing urban agriculture planning meetings the city is holding:
http://tinyurl.com/BRARezoneUrbanAgriculture/

Other cities are doing the same thing:

On Sunday, February 19, 6 Cambridge residents met to talk about how Cambridge, MA (pop 100,000) could become more self-sufficient in food, following the example of Todmorden (pop 15,000) (http://www.incredible-edible-todmorden.co.uk/ and an article in the Daily Mail: http://www.dailymail.co.uk/femail/article-2072383/Eccentric-town-Todmorden-growing-ALL-veg.html)

Helen Snively invited people over to her house. Five women and one man showed up. The ages varied from the 20s to the 60s with older outnumbering younger by 4 to 2. Everyone was a gardener at home and in community gardens. Among the ongoing activities of that group was participation in a yogurt coop, a group that bought milk and made fresh yogurt weekly (https://sites.google.com/site/somervilleyogurtcoop/), a web-based effort to map and encourage yard sharing in the Cambridge and greater Boston area (http://www.mycitygardens.com), fruit tree growing, and beekeeping. There was a graduate student studying urban homesteading, a producer for “Living on Earth” (http://www.loe.org/), a syndicated radio show, the director of the Green Streets Initiative (http://www.GoGreenStreets.org), the organizer of annual plant swaps, and the keeper of a local gardening mailing list.

Their discussion produced 3 general tasks:
Adding to an existing survey of fruit trees/bushes
Planting something to start off, possibly at City Hall on a spot where raspberries once grew
Mapping and connecting the existing local agriculture and food network to begin thinking, together, about producing 100% of our food (and fuel?) in Cambridge

Not present was a representative of the League of Urban Canners which harvest local fruits and makes jams, sauce, and other preserves from it, returning 10% of the product to the owners of the trees, vines, and bushes. In the fall of 2011, LUrC canned over 70 pints of apple sauce and 50 pints of grape jam. They can be contacted at leagueofurbancanners@gmail.com

There is also a Boston Sustainable Food Meetup 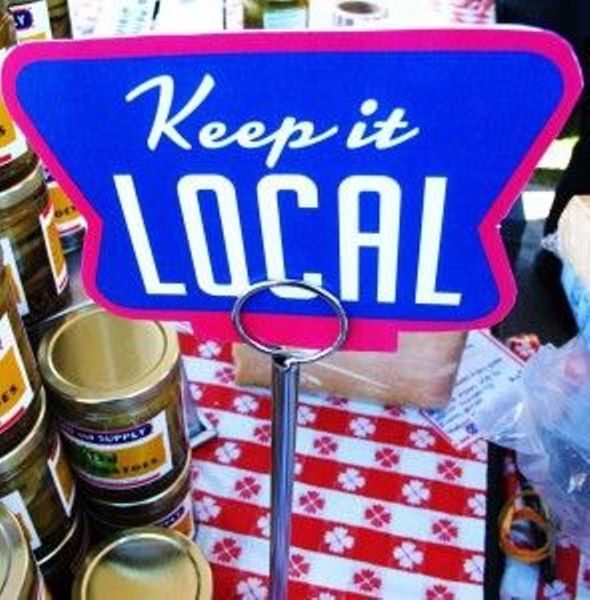 Do you care about what you eat? This is a group of folks who want to support local, humanely raised, environmentally sustainable, fairly traded, “green” food. Thinking about j…

Check out this Meetup Group →

The informal Cambridge 100% local grown food group will meet again in March. Another local food event in March is

7pm, Tuesday, March 27
Rm 110 School of Hospitality Adminstation
928 Commonwealth Ave, Boston, MA
Urban agriculture has captured the imagination of artists, architects and designers all over the world in recent years. Please join us for a cross-disciplinary discussion on the intersection of art, urban agriculture, and civic engagement – fertile ground for sowing seeds that remind us of our interdependent relationship with nature and each other.

The conversation will follow a screening of the new Boston Tree Party short documentary film.

Panelists will include artist Lisa Gross, founder of theBoston Tree Party, art critic Nicole Caruth, and Rachel Black, professor of Gastronomy at Boston University. The conversation will be moderated by Dina Deitsch, Associate Curator of Contemporary Art at the deCordova Sculpture Park and Museum.

The discussion will be followed by an apple cider reception in celebration of the launch of the second Boston Tree Party planting campaign.

The Boston Tree Party (http://www.bostontreeparty.org/) is a participatory public art project, a performative re-imagining of American political expression, and an urban agriculture project. At its core, the Party is a diverse coalition of communities from across the Greater Boston Area coming together in support of Civic Fruit. Communities ranging from elementary schools to assisted living centers, universities, churches, and more have each committed to planting and caring for their own pair of heirloom apple trees. Together, these trees form a decentralized public urban orchard that symbolizes a commitment to the environmental health of our city and the vitality and interconnectedness of our communities.

The structure and design of the Party is a playful re-imagining of patriotic and political language, imagery, and forms of association. Over forty communities from across Greater Boston are currently participating as “Tree Party Delegations.” Each pair of trees creates a new gathering place and opportunities for learning, exchange, and participation. The project seeks to catalyze a lasting engagement with the issues of food access, health, environmental stewardship, biodiversity, public space, and civic engagement.

The Party launched in April 2011 with the Boston Tree Party Inauguration on the Rose Kennedy Greenway. A new planting campaign will begin in April 2012.

Well gosh that was never true, to say the least. #StockholmSyndrome

Earlier, I spoke at the #MACOVIDOversight hearing and voiced my concerns & the concerns of my colleagues and constituents. I then asked @MassGovernor what I believe was a straightforward question...and received a not-so-straightforward response.

Read my full statement below: 2

In 2014, I was a clerk for the ME legislature's enviro committee and I'm flabbergasted by the arguments by progressive Reps (many of whom I respect) against making committee votes and testimony public. /1 #mapoli @act_on_mass @byChrisVan @statehousenews
https://www.masslive.com/boston/2021/02/massachusetts-house-democrats-push-for-transparency-attracts-gop-support.html

What conditions accounts for this?