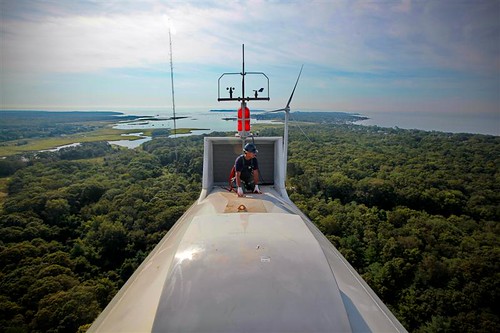 Local wind energy is on a year-long winning streak at the ballot box in Massachusetts, extended on Monday by the re-elections of pro-wind Fairhaven Selectman Charlie Murphy and Board of Health Member Jeannine Lopes:

With 19 percent voter turnout, Murphy had 1,391 votes and Riley had 607 according to a preliminary count. In the Board of Health race, Lopes had 1,287 votes and challenger Louise Barteau had 740.

Local elections held in spring are designed to be low-turnout – they’re exactly the elections anti-wind NIMBYs should win if their absurd health claims were finding even the least bit of traction. Instead, “Windwise” anti-wind energy activist Louise Barteau got only a third of the vote – again, in an election in which only the hardcore activist base of voters turned out.

It’s the latest in a string of victories for local wind energy:

The wins of DeTerra and Lopes were no accident – Friends of Fairhaven Wind rallied the pro-clean energy majority to turn out to support them.

The lesson: Local elected officials shouldn’t be scared of anti-wind NIMBYs – they should build as much clean energy as they can, then when it’s time for re-election, aggressively run on that record.

NOW - Large migrant caravan has left Tapachula, Mexico for the US.

Seriously, why waste air on that @Danny__McDonald nonsense in the Globe about @hicks4district6? As you can see, young Danny is not exactly a vocal defender of his…”work”, #bospoli. #mapoli!

First day of early voting in #boston with @wutrain and @SenWarren. #bospoli #mapoli

ICYMI: This month’s Auditor’s Report focuses on our call for a #RuralRescuePlan to bring greater regional equity for public infrastructure investment to the Commonwealth. Read about it here: https://mailchi.mp/04b4017729d3/the-auditors-report-october-2021 #MAPoli