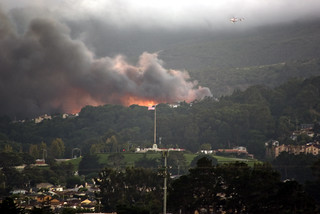 As John DiStaso reports for WMUR-TV, Kinder Morgan is launching a new ad campaign to try to stamp out growing opposition to its fracked gas pipeline proposals:

The Coalition to Lower Energy Costs has purchased time to air an ad 30 times over two weeks on the New Hampshire’s largest television station at a cost of more than $70,000.

Anthony Buxton, a Maine-based attorney who is a leader of the coalition and also represents Kinder Morgan in a Maine Public Utilities Commission proceeding, said plans call for the ad to air for a total of about three weeks on WMUR. He said it will also air on another New Hampshire television station, as well as two Maine stations and “several stations in Boston,” at a total cost of “several hundred thousand dollars.”

The “Coalition” is made up entirely of Kinder Morgan’s big-money lobbyists and lawyers. Their plan is a thinly-veiled effort to scare New Englanders into building new fracked gas pipelines. It’s blackmail – pay billions for our pipelines or we’ll jack up your energy rates even higher!

How is Kinder Morgan’s public relations push being received? Just look at the comments section. “All of these communities have voted to fight this! We do not want it, we do not need it!” reads one. The pipeline is meant to “send the fracked gas up to Canada to be shipped offshore as LNG and reap GIGANTIC corporate profits!” warns the next commenter. “Integrity is in short supply these days, Kindred Power doesn’t make it any more plentiful when all they sell are lies for their own profit, not ours,” says another. And it goes on like that.

But Kinder Morgan recently scaled back another pipeline proposal, saying “the changes are the result of not having enough potential utility and other large natural gas customers to justify building the smaller pipeline into Worcester.” If they’re short on customers in Massachusetts, why do they need new pipelines here?

Some energy experts say the fracked gas industry is clearly planning these new pipelines to get the gas to the export market. Much like with the Keystone XL tar sands pipeline, we’ll be left with all of the risk and none of the reward – all the explosions, disasters, and climate-disrupting carbon pollution with none of the promised lower energy costs. Just ask the folks in Pennsylvania’s Lycoming County, where a fracked gas pipeline exploded last night.

As Kinder Morgan’s own CEO admitted, these days the companies pushing new polluting pipelines are about as popular as tobacco companies trying to hook our kids on cigarettes.

@bostonpolice was already called on patrons, yesterday, in #Boston. Not acceptable. EVERYONE, no matter their medical or religious status, must be able to enter or move freely. @MayorWu is saying otherwise. #DoNotComplyEVER #nyc #boston #shameonwu #btogether #bospoli #mapoli #MLK

BREAKING: Unvaccinated protesters ARRESTED in NYC tonight by the NYPD for dining inside an Olive Garden restaurant without proof of “vaccination” against COVID-19. Footage captured by @LeeroyPress.

"Wu said officials will place workers who don’t get the vaccine on administrative leave and potentially fire them, but are delaying enforcement until Jan. 24."

Thomas Connors welcome to the animal farm you know@ThomasConnors·
4h

If you have any questions, feel free to DM me or you can reach out to @antamcollins re:Sonia or @KaveeshPathak re:Tami. Here's hoping @SoniaChangDiaz and @TamiGouveiaMA win both the Nominating Convention AND the 9/20* Primary! #mapoli
*Tentatively set for 9/20 but could change.

Lastly, if you aren't elected a delegate at your caucus, but have disabilities, are a minority, part of the LGBTQ+ community and/or 16-35 years old, you are eligible to apply to be an add-on delegate. The application will be posted by @massdems sometime in March-April. #mapoli

One more thing: if you don't want to be a delegate or are unsure about being a delegate, you should still show up to your caucus since your vote at the caucus can get more @SoniaChangDiaz and/or @TamiGouveiaMA delegates elected. #mapoli