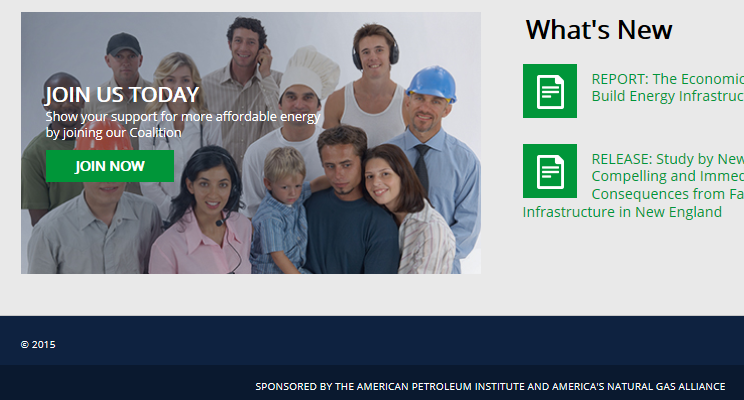 The American Petroleum Institute and America’s Natural Gas Alliance have launched the “New England Coalition for Affordable Energy,” the second oil & gas industry front group to hit Massachusetts in less than a year. Shocker: It’s put out a report calling for new & expanded fracked gas pipelines. Which Massachusetts reporters saw through this fossil fuel front group, and who got burned?

The group’s website is covered with obvious stock photos of phony “supporters.” Down at the bottom, it contains the curiously up-front admission that the project is sponsored by the American Petroleum Institute and America’s Natural Gas Alliance. Considering so many oil & gas fronts like Kinder Morgan’s “Coalition to Lower Energy Costs,” assiduously hide their real identities, it’s bizarre this one put it right on the website.

That key fact presented right on the website presents a ready-made litmus test for local reporters: Who did research, and who just rewrote the news release (which didn’t mention API or the Gas Alliance)?

The New Haven Register’s Luther Turmelle saw right through the front group, immediately calling out its oil & gas industry ties. Steve Urbon of the New Bedford Standard-Times also detailed the Big Oil funders tugging the Coaltion’s strings. But the other outlets like the Boston Globe and State House News Service covered the Coalition’s report as a seemingly-grassroots effort, failing to mention sponsorship by the American Petroleum Institute and America’s Natural Gas Alliance at all.

If the “New England Coalition for Affordable Energy” and the “Coalition to Lower Energy Costs” sound generic and hard to tell apart, that’s by design. Polluting industries know they’d get laughed out of the room if the headline was “fracked gas giant says fracked gas pipelines lower energy costs.” So they create these pop-up, disposable front groups to push out their propaganda, knowing newspapers with shrinking newsrooms don’t give their staff the time to properly investigate. Whenever an existing front group is unmasked, they can stuff it in the trash, come up with another generic-sounding name, and start a new one.

If more fracked gas would lower energy costs as these polluter front groups claim, why have electricity prices spiked in Pennsylvania, ground zero of the fracking boom? New England is already alarmingly dependant on fracked gas, which today is providing 61% of our region’s electricity.

Fracked gas is scientifically shown to destabilize our climate, pollute our drinking water, and trigger earthquakes. Instead of doubling down on our dangerous fossil fuel dependence, our leaders should continue moving Massachusetts to new sources of clean energy like home and utility-scale solar as well as onshore and offshore wind.

Thank you @MikeConnollyMA for launching our canvass with Cambridge's @SunriseMvmt today at Dana Square Park at 1 PM! All are welcome to join us. Sign up here: https://docs.google.com/forms/d/e/1FAIpQLSd9b5PdhlT9aKION5UAK3qk6fnPGoxlKVx-UiOgsQZ3bDZFaA/viewform

Then at 1 pm tomorrow, I will be launching a canvass with Cambridge’s @SunriseMvmt and candidate for Cambridge City Council @TheodoraSkeadas at Dana Square park in Cambridgeport. https://docs.google.com/forms/d/e/1FAIpQLSd9b5PdhlT9aKION5UAK3qk6fnPGoxlKVx-UiOgsQZ3bDZFaA/viewform

"It is a pleasure to work with Andreae on civil rights issues and government transparency." State Senate Majority Leader ⁦Cynthia Stone Creem.

GBIO is proud to be in partnership with @VoteRussell @BostonNAACP1911 @BECMAinc @MassVOTE @KingBoston11 and many more on "Earning the Black Vote." Show up and stream TODAY Oct 23, 1pm. #mapoli #bospoli @wutrain @AnnissaForBos

Check out an interview with @jimbraude of @GreaterBoston of @BonnieTen and Leslie Credle of @Justice4Housing on #NoCostCalls: "connecting with your family is one of the single most important ways that people survive in prison." https://www.wgbh.org/news/greater-boston/livestream

We are the blast zone of @enbridgegas #NoWeymouthCompressor. A peninsula. Enbridge uninsured, evacuation plan useless. #NotYourSacrificeZone #NoSacrificeZones Impossible to run. Breathing poison daily, hoping not to explode. #mapoli #ElfonSite @FRRACS_MA
We see u, all of you. ✊

Something #scary is coming to #Pennsylvania…. Actually it’s already here. We live in the #BlastZone- my community is unaware, my government doesn’t care to make people aware and they permit criminals. So this is my #Halloween display. #HappyHalloween #Fracking4Plastics is scary