I have a confession to make: I need Senator Warren, badly. I’d be happy with Sen. Markey, but I NEED Sen. Warren.

Let me back up.

June 30th, the MassDEP Presiding Officer Jane Rothchild had just handed down her ruling on the side of granting the air permit to Enbridge for the Weymouth compressor. I was upset.

What did I do in my state of abject frustration? I skipped Governor Baker’s office and used my lunch break to pay a visit to Senator Warren’s office as she is on the national stage right now. I brought some back-up documentation and this letter:

I know y’all are super busy.

May I please ask something of Senator Warren: would she please tweet a short thought about what’s happening in the Fore River Basin (pls see attached Globe story, 1)? I have emailed D. and he has said he’ll look into it, but I felt I also better follow up.

It looks like Weymouth and the Fore River Area is going to get an air permit for the compressor shoved on us despite MassDEP lying to us, and then saying it’s no big deal that ambient air toxins in the area are already way over DEP/EPA limits. Even Maura Healey is edging towards involvement (pls see attached story, 2).

It would be immense for us in the Basin if Sen Warren was able to help amplify an ongoing injustice when the compressor fight is at a critical juncture. MassDEP Presiding Officer Rothchild issued her ruling on our air permit appeal yesterday, in favor of granting the appeal. It’s now in DEP commissioner Suuberg’s court to sign his approval… or not. (pls see attached story, 3)

Sen Warren’s involvement in this compressor fight has been invaluable and we need her again for as long as it takes to tweet.

Thank you for your consideration!

I received an email response that was polite but didn’t really match my urgency. I understand. There are a lot of fish to fry in the Warren office right now, but she is still our Senator and we need her.

Circling back to your request. Our team is taking this matter under consideration and thank you for your continued advocacy/commitment to your community. The Senator has visited the compressor station and below is an article on our website regarding what she has done about it.

D (name redacted by me)

I know everything anyone does to raise their voice against this project helps. I’m not ungrateful in the least. I know there is no silver bullet to kill this project, only a 6’6” tall man with no conscience. I replied:

Good to hear from you. I hope all is well?

We just had a rally outside the State House. By “we” I mean members of Mass Power Forward and Fore River Residents Against the Compressor Station. Here is a link to the livestream: http://bit.ly/7-2RallyDEPSH

I/we have been very appreciative of Sen. Warren’s previous involvement. I see this letter was written to PHMSA when I was still sitting in the Governor’s office (the first time). Were you able to attend the recent PHMSA meeting Rep Lynch called in Weymouth? While it was a great opportunity, I’m finding it hard to think there will be any PHMSA action on this, especially with the current administration. Heck, Gov Baker’s administration is acting like Trump’s but with a “nice guy” face on it.

We need our Senator’s voice, any time she can spare to make a comment. The compressor project is rife with corporate corruption, a pliable and amenable Governor, a dysfunctional DEP, and a strong disregard for environmental justice populations. Seems like Sen. Warren’s wheelhouse. Hundreds in MA are doing everything they can to help stop it. We need our Senator to amplify our voices and stand up for us to help prevent more disease and death, please.

We need her again for as long as it takes to tweet.

Thank you for your consideration, and hope to hear from you soon,

I had sent that email July 2nd, and was going to try to form a public action around getting Senator Warren’s attention since the air permit was issued July 12th. I was mulling strategy when I saw the home page of Sen Warren’s website (not her Presidential campaign website). 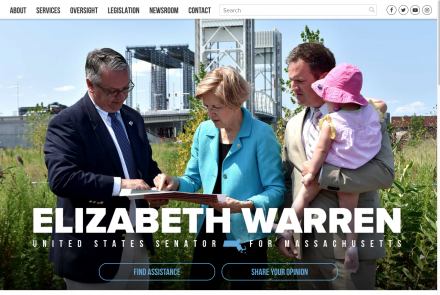 Fellow Massachusetts residents, you can imagine my jaw dropping when I saw this picture. I know no harm is meant by this photo, but seeing it was just too much for me. I decided right then that I would spare our poor Fore River Basin residents one more damned thing to do and I’d write a blog post instead to see if this gets attention. Charley gave me access to this platform, and I imagine I should use it since Weymouth is at DEFCON 3, tipping quickly to 2. With the issuance of the air permit, and likely other permits ready to roll by early August, I don’t have time to participate in polite and repetitive requests.

Despite demands to stop the project from Municipal, State and Federal elected officials, our Governor has been steadfast in his dedication to Canadian-owned Enbridge. Gov. Baker is willfully abdicating his sworn responsibilities as Governor. So I’m making a public plea, again:

Weymouth is in the fight of its life, with national implications if this precedent-setting compressor is allowed to be built.

It’s not just Weymouth or the Fore River Basin that would be affected in New England: Residents of New Hampshire and Maine will face increased danger from highly pressurized gas that would run through a Weymouth compressor and an old pipeline not built for the increased pressure. The highly pressurized gas will also run through two compressors in New Hampshire and five compressors in Maine. So much potential for sustained damage to life and property.

Senator Warren, we need your voice against this terrible project, on the national level.

I don’t see anything on your presidential campaign website specifically about the environment. Weymouth’s fight is a microcosm of what’s going on nationally regarding fossil fuel companies shoving projects down people’s throats. Defending your own backyard against this terrible project would be a good place to start your environmental policy foundation.